Raider Hockey to Rematch US in the District Final 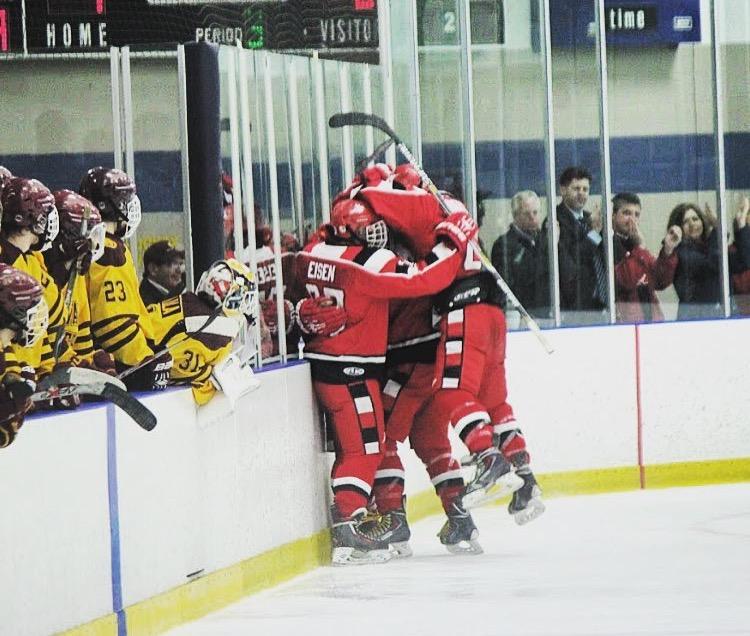 Raider hockey players celebrate after senior Peter Shick ties the game with a third period goal against Walsh Jesuit in the District Semi Final last Tuesday. The Raiders will play US tonight in the District Final.

Raider hockey advances to the District Final for the first time since 2013 and will face US after Tuesday’s thrilling 2-1 win over the Walsh Jesuit Warriors.

The Raiders were led by Senior Captain Peter Shick, who scored

the equalizing goal on a powerplay during the third period, and junior forward Daniel Ritts, who had assists on both of the Raiders’ goals. The winning goal was scored

by freshman Britt Anderson off a perfect pass from Ritts with 35 seconds left in the game.

“It was a great feeling, we were down for most of the game and to be able to come back and score

two in the third and come out with the win was very satisfying,” Shick said.

The Raider defense also stepped up. Led by senior defenseman Matthew Milgram and junior goalie Liam Siwik, the Raiders shutout the Warriors in the second and third periods to seal the win.

Anderson knew that he had to score

“I had already missed a great opportunity to score

earlier in the second period and I was not going to be the reason that the seniors’ season ended so when Daniel and Peter made two great passes to get it to me back door I knew I had to put it in,” he said.

Anderson believed that facing US on Friday was the motivation that drove the Raiders’ comeback.

“We knew we had a place to be Friday night,” he said. “Before the third period, Peter [Shick] made it clear to the whole team that we had worked all year for Friday night to play US in probably what is the biggest game a lot of us have ever played.”

The Raiders fell to the No. 1 seeded Preppers earlier in the year, but Shick believes that the Raiders will be ready come game-time.

“We are not going to leave anything to chance, we’re going to play the best game we can and try to come out with a win,” he said.

Anderson agreed that the Raiders would be ready for the Friday night showdown.

“There’s no team I would rather play than US,” he said. “Playing your rival on a Friday night in a packed arena is going to be crazy. Hopefully we can feed off the energy that the fans always give us and get the same result as three years ago.”

The Raiders look to clinch their second district title in four years and advance to the state final four. The Raiders last final four appearance came back in 2013 when they won the state championship.

“It’s the district final against our rival US on a Friday night, winner goes to Columbus,” Shick said. “It doesn’t get much better than that.”