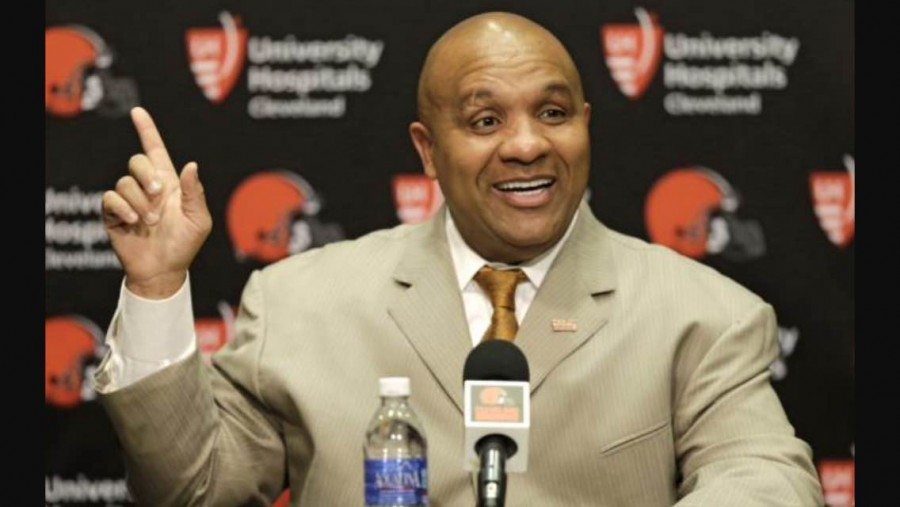 Hue Jackson speaking at his first press conference as the Cleveland Browns' new coach on Wednesday.

The Browns have rebuilt their franchise many times since 1999, and on Wednesday brought in their newest head coach former Cincinnati Bengals’ offensive coordinator Hue Jackson.
The Browns started their latest renovation hours after their 28-12 loss to the rival Pittsburgh Steelers in the final game of this 3-13 season. While owner Jimmy Haslam vowed before the season there wouldn’t be a large personnel change after this year, he fired coach Mike Pettine and general manager Ray Farmer.

Then, in only ten days they hired Jackson. Jackson has had a large amount running the offense in the Bengals organization, and also brings a strict discipline to the team as well.

The Browns have received a positive reaction from the football world on their new coach.

“The Cleveland Browns finally did something right,” Paul Daugherty of the Cincinnati Enquirer wrote.

He wrote that Jackson is “a guy universally respected by those he has coached. Someone who is charismatic and forceful, and who can teach others to be the same. A coach who will not condone emotional outbursts that cost teams games.”

Also, reports have surfaced that Jackson wants to move on from young quarterback Johnny Manziel. He wants to send a message to the Browns’ players that he will not accept unruly off-the-field activities and behavior. But, some fans believe he should be more lenient with Manziel and his behavior.

“I think we are at a point in our franchise that we can’t afford to care about activities off the field,” senior Canyon McWilliams said.

While Jackson has been brought in by the Browns, Mike Pettine and Ray Farmer have been discharged from the Browns.

Pettine’s coaching career started promisingly in Cleveland. In his first season in 2014,  Pettine started out 7-4 and it even looked like his Browns could make the playoffs, something the Browns haven’t done since 2002.

But from then on it’s been all downhill for Pettine.

The coach went 3-18 after the hot start to this time, and while it seemed he was well respected by players Haslam felt it was time for the coach to go.

“I think they made the call they had to make. I liked Pettine, but I hated our lack of success and in the NFL [National Football League] you can’t keep a coach around that isn’t producing,” he said.

Former general manager Ray Farmer’s work with the Browns wasn’t so smooth either.

Along with his draft disappointments and questionable free agent signings, Farmer was suspended for the first four games this past year for texting the Browns sideline during games in the 2014-2015 season.

“We did need a new coach and gm [general manager],” she said.

However, Mack blames the Browns’ struggles on Haslam too.

“I think Haslam is just full of himself,” she said.

Haslam also blamed himself for the Browns’ disappointment.

“The fact that this franchise has not done better over the last two or three years, the blame lasts squarely on me,” he said in the press conference after he fired Pettine and Farmer.

“I think he is the real problem. He’s the one that really needs to go,” McWilliams said.

It isn’t new how the Browns are firing and hiring bringing in new personnel. But it is odd how Haslam plans to do it. He hired a head coach before a general manager, not normal by the National Football League’s standards, and has made it clear that the new man on the block that has the final say on the roster is executive Sashi Brown.

“Sashi Brown’s job as Executive Vice President of Football Operations, he will have the ultimate say on the roster,” he said.

Sashi Brown is an unknown name to many Browns fans.

Brown has never been a personnel guy. He worked more like a businessman for the team last season.

Brown’s biggest job in the 2015-2016 season was management of the salary cap.

But, this past season, the team’s media guide also lists his duties as “contract negotiation, government affairs, employment matters, and insurance and risk management.”

“I have no idea why he [Haslam] hired Sashi Brown, 38 years old and a graduate of Harvard Law School[.] Really? I hope he is a genius because he cannot have much life experience in the area of football,” stated Watson in an email interview.

This coming season Brown will have the final word on picking players and coaches, even though he has had little experience in evaluating player talent.

Maybe the Browns are just trying a new approach with hiring number people like Sashi Brown.

Another example of these calculated individuals being hired by the Browns is Paul DePodesta.

DePodesta is known for the baseball film Moneyball, where his real life character is played by Jonah Hill. DePodesta is portrayed as an intelligent graduate from Yale, who brings his equations and philosophy of baseball to the Oakland Athletics. Along with current general manager Billy Beane, DePodesta helped build a team up with little money by using equations and numbers to calculate undervalued players.

However, DePodesta has never worked in football, and Watson isn’t convinced he’s the right guy for the Browns.

Watson stated, “Sounds to me like Jimmy [Haslam] just watched the movie Moneyball. He’s looking to take out the emotional decision making and use statisticians to start running his football team.”