Kicking Off the Football Season 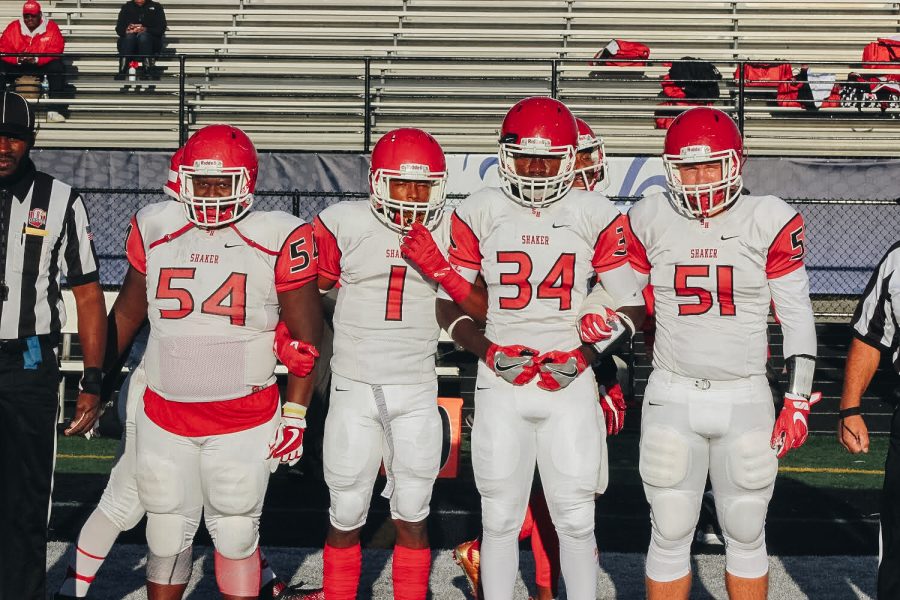 Football players at an away game last fall.

It’s not quite Friday Night Lights, but it’s close.

The football team typically hosts home games Saturdays at 1 p.m., but today’s game against the Benedictine Bengals will kick off at 5 p.m. and include activities to help promote the game and pack the stadium. “No temporary lights are being used,” Athletic Director Don Readance wrote in an email interview. Readance added that Shaker has never used temporary lights for a game.

“The whole point of playing a Friday home game was to try to replicate the ‘Friday Night Lights’ high school football experience that almost all other high schools and teams experience across the country,” Readance wrote. “Obviously we are missing the ‘lights’ part but our team will at least have some of the experience of playing at home on a Friday.”

The typical length of a football game is 2.5 to three hours, and sunset will occur at 8 p.m. today. “If sunset causes the conditions to become unplayable this Friday, the rest of the game would be played on Saturday morning,” Readance wrote.

However, it is unlikely the game will last more than three hours. Shaker employs a run-heavy offense this year, so the clock will continue to run after the runner is tackled.

Nasir Rashid, a linebacker and captain of the football team, said the team’s shift from a passing offense to a run-based attack shortens games significantly. “In years past, when we threw the ball heavy, kickoff would be at 1, and halftime would be at 3 o’clock,” Rashid said. “On Saturday, we were running the ball a lot, and halftime was at 2:30.”

Sophomore trombone player John Carter is looking forward to the game and said it will promote high attendance. “I think there might be more students because Friday night games seem more fun than Saturday games in the middle of the day,” he said. “It would be a lot cooler temperature wise.”

The forecast for tonight shows the temperature in the high 70s. Carter said weather is a bonus for marching band members because they often overheat in their band uniforms.

Readance is excited for tonight and hopes turnout will be good. In addition to the game, there will be bouncy houses, face painting, a balloon artist and Assistant Head Custodian Carlos Sanchez as DJ.