From JV to Varsity: How Important is That Letter?

Varsity sports win popularity, but playing a sport you love for JV wins the lifelong race 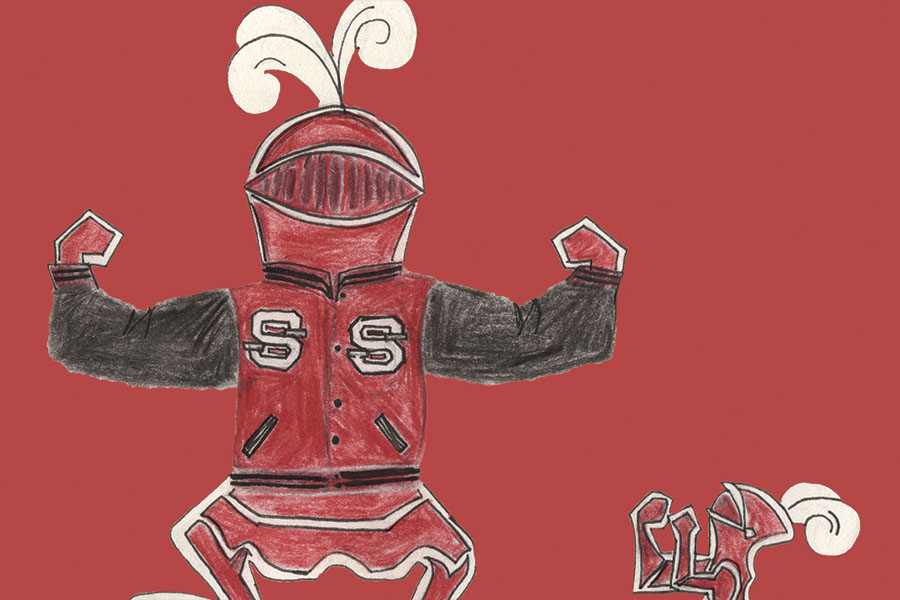 As athletes, our competitive nature makes it difficult to hear that we aren't good enough for a spot on the varsity team.

As a high school athlete, my goal has always been to play varsity. When I was 10 years old, I frequently attended the high school hockey games. To me, those athletes were like gods.

When I saw their talent and skill, I dreamed of how exciting it would be to make the varsity team. Back then, I knew I wouldn’t care how much I played or how important I was to the team. I just wanted to experience the feeling of skating onto the ice while my peers filled the stands alongside youth hockey players and other members of the community.

Even then, I knew that JV hockey didn’t achieve nearly the same popularity. I knew that the atmosphere surrounding a varsity game and a JV game were nothing alike.
While my first varsity hockey home opener had a sold-out student section, most seats remained vacant at my junior varsity hockey games. I grew accustomed to seeing only parents and relatives at these JV games.

My junior varsity teammates and I didn’t rank highly among our peers. I was rarely asked how my JV team performed. Instead, I was asked about the best players on varsity and how their team was doing.

For me and many other high school athletes, hearing our coaches tell us that they are going to place us on the JV team for the year crushes us and destroys the prospect of playing games in front of large crowds.

As athletes, our competitive nature makes it difficult to hear that we aren’t good enough for a spot on the varsity team.

Throughout the preseason, we compete with peers and analyze our chances for those limited varsity positions.

These months of hard work and dedication lead up to a coach’s decision, and it hurts to know we’ve failed when we didn’t achieve our goal of playing on varsity.

Everyone faces rejection. In music, you might make second chair, not first. In theater, you might make the chorus, not the lead. In college admissions, you might be denied by the school you’ve always wanted to attend.

As devastating as those rejections are, failing to make varsity is especially so because sports play an outsize role in the culture of a high school.

Sporting events are the most popular school-sponsored events, despite athletics having nothing to do with academics.

Academics are the reason high schools exist, but football games on Friday nights (at schools lucky enough to have them), packed gymnasiums for basketball, pep rallies and field hockey state titles are just as much a staple of the school as its classrooms and curriculum — and they are far more public.

When you don’t make the top team, people know. It hurts the side of you that houses athletic swagger, chest-pounding, fist-pumping and ego. I’ve heard Shaker students ask if certain people play JV or varsity and when the answer is JV, they snicker and laugh.

Teenagers don’t want to be laughed at. It’s tough for kids to see you as “the kid who plays JV.” It can hurt your ego and self-confidence.

Junior Allison Stewart, who plays varsity soccer, said varsity sports are always going to attract more attention than JV sports. “The varsity team is a stronger team, so the games are generally more fun to watch,” she said.

Junior Ethan Adams, who plays varsity soccer, said that varsity sports end up being better entertainment because varsity teams are more skilled, “so, understandably, that causes more support.”
But that shouldn’t make it OK to ridicule JV athletes. The term JV is associated with mediocrity, underperformance and an obvious step below varsity. It is a derogatory label, yet it isn’t a bad thing to play JV.

Varsity football coach Jarvis Gibson said the purpose of JV sports is for athletes to develop their skills and prepare for the demands of varsity.

“I’m not sure why kids believe playing JV is a punishment. I disagree with this and promote players to play JV,” Gibson said.

“It gives them additional time to develop the necessary athletic and fundamental skills to be successful at the varsity level,” he said.

According to the National Federation of High School State Associations, the junior varsity level is meant to prepare athletes for varsity next year. It isn’t meant for providing all athletes with an opportunity to play the sport they love.

Participation in high school sports shouldn’t be based on the notoriety of the team, but rather the enjoyment of the sport and the formation of new connections and friendships.

It is disheartening to hear that athletes will trade this true purpose of their sport for the superficial appeal of a spot on varsity.

“Varsity is what you strive for when it comes to high school sports. If I already knew I would never make varsity I would find another sport,” Frazier said.

Junior baseball player Michael Scott said that if he knew he’d never play varsity, he would not play all four years.

“What’s the point of playing if I’m not good enough to continue on to the next level?” he said.

If you quit a sport because you realized you’d never make varsity, you might have just been going after that varsity label, where you can gain popularity and show off that varsity jacket.

If you quit a sport just because you knew you’d never make varsity, then you weren’t playing that sport for the right reason. High school sports are meant for gaining friendships, being a part of a team, and enjoying the sport you love. High school athletics shouldn’t be just about making varsity.

Some Shaker athletes said they wouldn’t quit their sport even if they knew they’d never make varsity.

Senior varsity baseball and hockey player Nick Forbes said that in the hypothetical situation that he played JV throughout his entire high school career, he would still compete. “Even if it’s JV, sports are still fun,” he said.

“I would most likely still have played even if I knew I wouldn’t make varsity. Even though it would have been tough, it would have still been worth the experience bonding with the [JV] team,” said Yule, who made varsity hockey senior year.

When we high school athletes move on, the labels JV or varsity won’t mean anything. We will simply remember playing the sport they loved. So, while we are in high school, we shouldn’t get so hung up on who made varsity and who didn’t.

It doesn’t matter as much as we dramatic teenagers want to believe. The world isn’t going to end if we never make varsity. We won’t be bitter for never making the top team once we head off to college. We won’t be angry over never making “V squad” once our own children are growing up, playing youth sports and, eventually, high school athletics.

Success in your high school athletic career doesn’t matter in the grand scope of life. According to cbsnews.com, 3.1 percent of senior high school basketball players end up playing on college teams. So even if you make varsity at some point, chances are you won’t participate in NCAA basketball.

But once we grow up, we will miss the feeling of playing the sport above all else. We might miss wearing a varsity jacket or playing in front of large home crowds. But as our bodies start to deteriorate and we have families of our own, all of us will miss playing our respected sports.

Some of us don’t even care about making varsity.

Stewart said, “I would have definitely played if I knew I would never make varsity, simply because I have played soccer for my whole life so it’s an important part of my life. I don’t think it would be worth giving it up simply because I wasn’t on the varsity team.”