Some athletes cried foul when Donald Trump insisted his boasts about groping women were only 'locker room talk', but was his claim out of bounds? 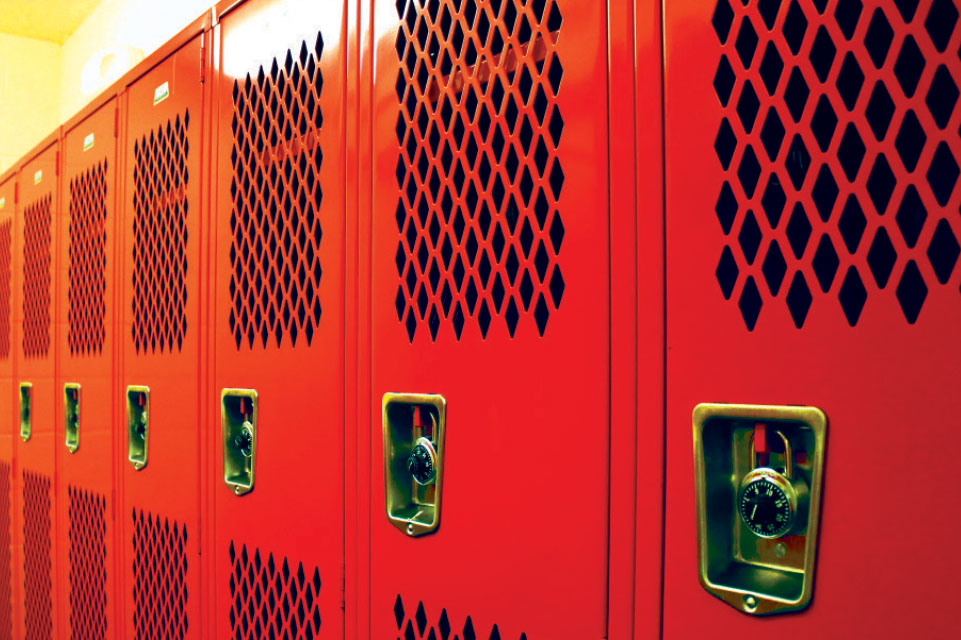 Is the talk really that toxic?

“I feel like ‘locker room talk’ brings to mind the most lewd conversations about women and sex, as well as guys just goofing off and giving each other crap about less meaningful subjects,” junior soccer player Jacob Connell said.

“What’s said in the locker room stays there, so [athletes] say a lot of stuff, particularly stuff we don’t want anyone else to hear or to be repeated,” sophomore lacrosse player Carter Belk said.

In the tape, Trump can be heard talking to radio and TV host Billy Bush. He boasts that he starts kissing women without soliciting their consent, and that “when you’re a star, they let you do it. You can do anything”. Trump goes on to say that doing “anything” includes grabbing women’s genitals — again, without consent.

After the incident, Trump apologized, claiming he was embarrassed by the comments, but brushed off the conversation as “only locker room talk”.

Trump’s comment associated the locker room — and therefore athletes — with the promotion of rape and the objectification of women and insinuated that as long as derogatory, even criminal, talk happens in a locker room, it is acceptable.

Trump’s statements are just one example of incidents that link male athletes to speaking disrespectfully about women that have come to light recently.

In the past year at Harvard University, both the men’s cross-country and soccer teams were involved in scandals after publishing sexist comments about female athletes at the school. The men’s soccer team’s season was cut short after the university discovered the team had been creating spreadsheets in which they ranked female athletes based on attractiveness and sex positions. Later that month, the men’s cross-country team came forward and confessed to creating similar spreadsheets.

Following Harvard’s scandal, a slew of other colleges including Columbia University, Amherst College, Princeton University and Washington University in St. Louis followed suit, and suspended teams for offensive or sexist comments made by athletes.

Sophomore hockey player Keenan O’Toole said that college athletes’ egos are to blame. “It comes to show that athletes think that they’re superior to the rest of people at their school. I went on a college tour, and the Big 10 colleges tend to separate the athletes from the rest of the students, and [the school] almost feeds this idea that the athletes are better than everyone, and this can impact how they treat women.”

A study conducted by the president of the Andrew W. Mellon Foundation, William G. Bowen and Sarah A. Levin, a former researcher for the foundation, found that male athletes have at least four times greater chance at admission to colleges, a possible reason for a larger sense of importance, and that athletes are isolated socially and academically from their peers.

As student-athletes tend to mainly interact with only other student-athletes, athletes feel a need to fit into the team. Pressure to conform can even lead student-athletes to purposefully under perform academically. In order to fit into the perceived social norm for athletes — that athletes do not care about academics — athletes will take easier courses and spend less time on academics, a study written by Daniel Oppenheimer and Sara Etchison, professors at University of California at Los Angeles and Joshua Levine of Princeton University found.

“Even if [athletes] feel strongly about it, they wouldn’t want to try [speaking up] to see what happens. They don’t want to take that risk,” O’Toole said. “If, say, the captain said, ‘No, we’re not saying that, none of that vulgar stuff,’ it would be totally different.” 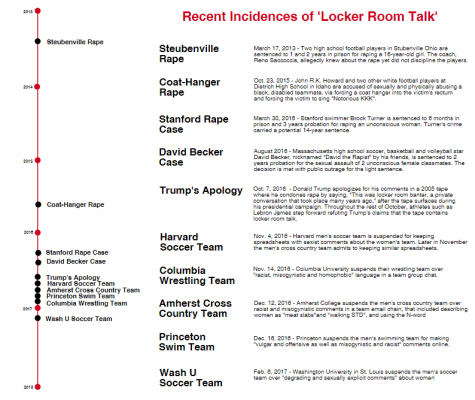 Though locker room scandals like the ones at Harvard are virtually unheard of among female athletes, junior field hockey player Felicia Hamilton said lewd locker room talk cannot be attributed only to men.

“I think women are capable of doing the same thing but I believe it is more associated with men’s teams,” Hamilton said. “I think it has to do with our society and how we almost expect these kinds of scandals to come from men’s teams.”

“It’s more common with boys, but girls definitely do it, too,” said junior softball player Molly Amolsch. “With my teammates, it’s mostly been gossip, secrets and trash talk about other teams before games. Nothing too vulgar. Obviously I don’t know first hand [about men’s’ locker rooms] but the stereotype is that it is often more vulgar and sometimes even degrading talk of women, but I’m sure they have their fair share of gossip and trash talk, too.”

Trump’s comments on the tape stirred sportswriters and athletes such as LeBron James to share their experiences of the locker room — contradicting Trump’s portrait of locker room talk.

“We don’t disrespect women in any shape or fashion in our locker rooms. That never comes up,” James told Sports Illustrated.

“Every locker room is different, and the types of conversations that go on depend greatly on the type of leaders on those teams,” Connell said. “I also think it’s important to understand that not all conversations are about women. Most of the conversations aren’t. They’re about TV, the last party, school, shoes — meaningless stuff.”