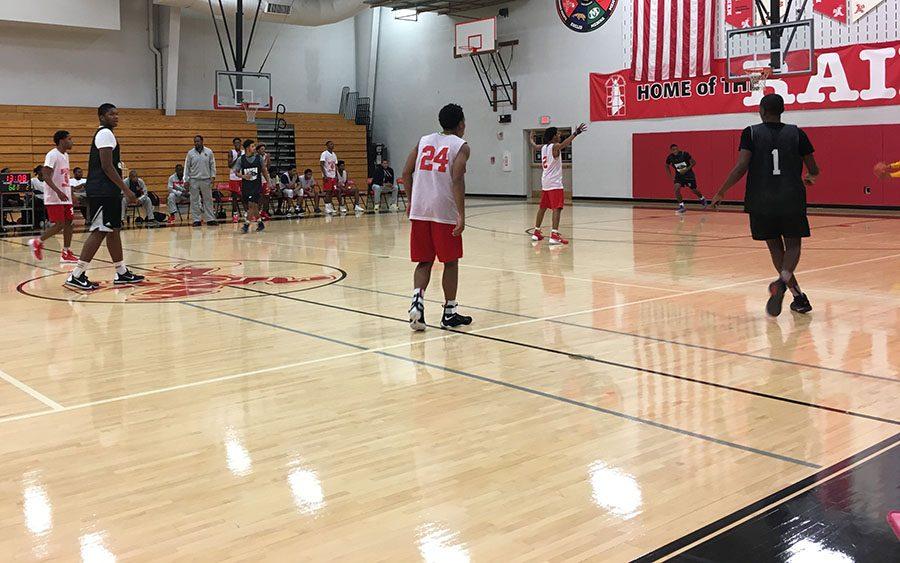 “Tough” is the word men’s varsity basketball coach Danny Young used to describe his team for the upcoming season.

Experience is going to be a positive learning tool this year for the men’s varsity basketball team according to senior captain center George Evans, who was named an all-conference selection last season. Evans averaged 8.9 ppg and 6.9 rpg.

“We will make a lot of mistakes, but we’re gonna learn from those mistakes and win,” he said. “Early on it’ll be a lot of trials and tribulations, but overall we’ll be able to overcome them.”

“I’m feeling real confident. We had a really good pre-season. A lot of guys stepped their game up,” said assistant coach Adrian Lewis. “I’m hoping that we do better than last year. We’re looking to have more fun and more wins.”

The team finished with an 8-17 record last season.

“Hungry” is the word Lewis uses to describe the team.

“We have a lot of seniors that experienced that eight-win season, and they definitely want to graduate and have success on the basketball court,” he said. “They’re hungry to show that they were better than the eight-win season last year.”

Senior guard Isiah Wright says the keys to success are “playing hard defense, not giving up, getting a lot of stops, and we just gotta play hard.” Wright averaged 6.4 ppg and 1.8 steals per game last season.

Wright said that defense has been a major focus in practice.

Teamwork is their key to success, Lewis said.

Lewis said the Raiders can reach full potential by paying attention to detail. “Valuing every minute of practice, and taking nothing for granted,” are also important, he said.

Wright said that his one goal is to make it down to Columbus for a state title. “We can go as far as the team can take us,” he said.

“I just expect us to buy into the program, doing whatever is necessary, get the fifty-fifty balls, making plays for our teammates, the extra pass,” Hardaway said.

“Staying focused. That’s the only thing that can really help us be successful in the long run,” Evans said.

Wright and Hardaway expressed opposing opinions about the Raiders in the postseason.

Wright said that in order to get to states, “We just gotta stick together, don’t get the big head. You can’t do that, because once that happens, you’ll just fall apart.”

“We’re a bunch of of hard-knock guys that will do whatever it takes to get the dub [win]. We bond together and we’re just them dudes,” Hardaway said.

Hardaway is also very confident about this season. “I believe that we should make it out of districts easy, and when it gets to Cleveland State with the regionals, who knows what can happen? Shock the world!”

Fans can support the Raiders tonight as they open up their season against the Strongsville Mustangs at home. Students new to Shaker will be admitted free. Tip off is at 7:30 p.m.