Sporting events have resumed, but COVID-19 dictates how 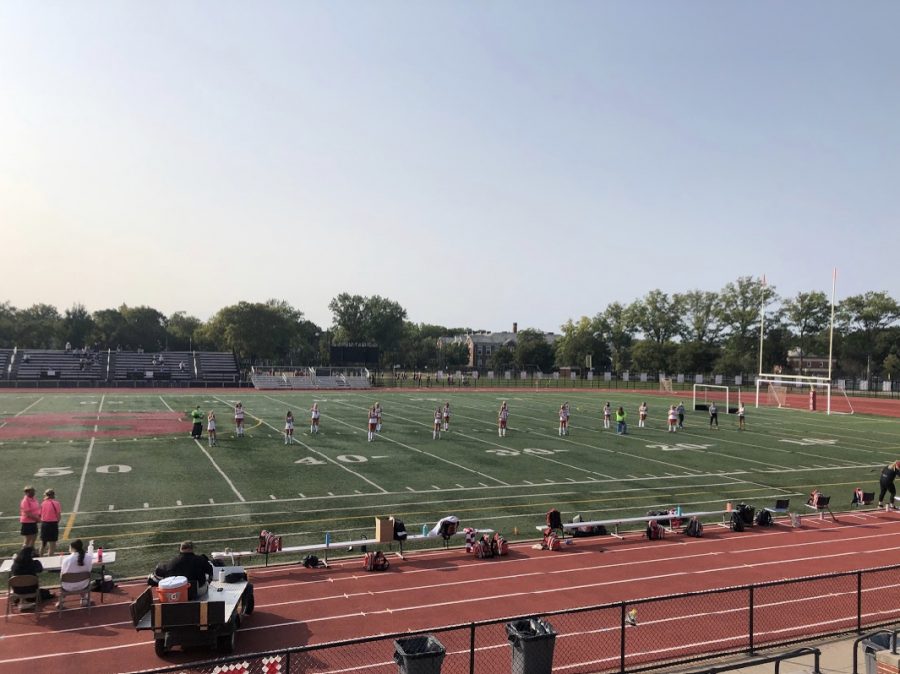 The field hockey team lines up before a game

Athletes and fans are adapting to modified play due to COVID-19 regulations.

Rules for getting into the stadium or gym, obtaining tickets, interacting with the opposing team, and even rules within competitions have been created to increase the safety of athletes, coaches and fans.

Before athletes enter the stadium, field or gym, coaches are to conduct a health screening in which they take the temperature of all athletes and ask a series of questions to check for COVID-19 symptoms. Spectators are asked to conduct their own COVID-19 screenings prior to arriving at an event. The district designated one-way entry and exit ways in the stands so fans can maintain social distancing procedures.

Junior Gage Weingart said that the cross country coach, David Englander, has been “avid” about the screenings. “There hasn’t been a practice where I haven’t seen everyone on the team get their temperature taken and been asked every health question,” Weingart said. “Our coaches want to have a postseason really badly, so they’re working hard to keep everyone in check.”

Englander, who teaches at Woodbury Elementary School, said that safety is most important to him. “I want my team to be successful, win and have a good experience, but even as a teacher, my number one responsibility is to make sure that kids are safe,” he said.

Once in the competition area, teams are instructed to refrain from shaking hands with opponents at the beginning and end of the contest. When on the sideline, athletes are to wear a mask and remain six feet away from one another. Wiping down the sporting equipment is also among the Ohio High School Athletic Association’s requirements.

“For volleyball, we’re not switching sides of the court now. At the Bedford game the other night, they would clean the ball after almost every point,” sophomore volleyball player Chloe Brown said.

For cross country meets, Weingart explained that teams aren’t allowed to set up tents and are instructed to wear masks until the start of the race. The team also spends less time at the meet location. “It used to be an all day thing, but now they want you in and out as fast as possible to avoid risks of contamination,” Weingart said.

Some athletes weren’t expecting the season to commence after practices were discontinued July 31, when preseason was beginning. “Honestly, I was just thinking that all fall sports were canceled. I was preparing for the worst and expecting no season, no games, but I’m happy of course that there’s a season,” Brown said.

At first, junior soccer player Ayande Joseph questioned why the sports season continued while school is happening remotely. “Initially I was surprised, but I feel like with the way they’ve been conducting it, it makes a lot more sense. It’s pretty efficient how they’re not having different sports overlap practice times and have everyone spaced out, where obviously at school it’s a lot harder to manage,” he said.

“Being able to play pushes us to not take it for granted and work our hardest on the field,” Joseph said.

Brown says it’s hard not having fans. “Only my parents can come. No other friends, no other family, nothing, so that’s kind of tough,” she said.

Junior football player Bryce Ailiff said the atmosphere reflects fans’ absence.“They help us get pumped up, but since there’s no fans, the energy is low,” he said.

Buses are still being used to transport athletes to away games. A maximum of 22 people — one person to a seat — is permitted. Masks are required at all times, and eating and drinking are not allowed during the trip. Trips are shorter, as well, with travel limited to schools within a one-hour drive.

Junior tennis player Leela Khatri worries about her health. “I really don’t know where these girls are coming from, especially because I’ve heard numerous stories about the virus. We just played Walsh recently, and there was an outbreak at their school, so it’s kind of unsettling. We’re playing so many people, really on a daily basis, so it’s definitely a safety concern,” she said.

Khatri said that concern can affect her performance. “A big part of my game is my mentality,” she said. “When I’m distracted, it can be difficult to play well.”

Englander said that other schools aren’t taking the safety protocols as seriously as Shaker does. “I find that I frequently have to encourage people to stand back from me, and I notice that some of the other Shaker fans are having to do the same thing, which can make for uncomfortable situations,” he said.

Ailiff isn’t nervous about his safety on the football team. “We are all taking this very seriously and we social distance,” he said.

Weingart said he feels safe on the cross country team. “I think we do a really good job staying safe, partly because it’s so easy for us as a sport. There’s rarely contact, we can always limit the number of people we see, the pods work really well and the coaches try hard to make it super safe,” he said.

Senior field hockey player Lily Camp doesn’t get to spend as much time with her teammates as she has in the past. “I miss the overnights in Columbus and being with my team. I feel like we’ve missed out on a lot of team bonding activities,” she said.

Khatri said, “I definitely miss the normal season feeling, especially because as a team we were all super close, and we really can’t do that this year, but I understand that it’s necessary for our safety. I’d rather us continue playing in a safe way than risk anybody’s health or their family’s health.”