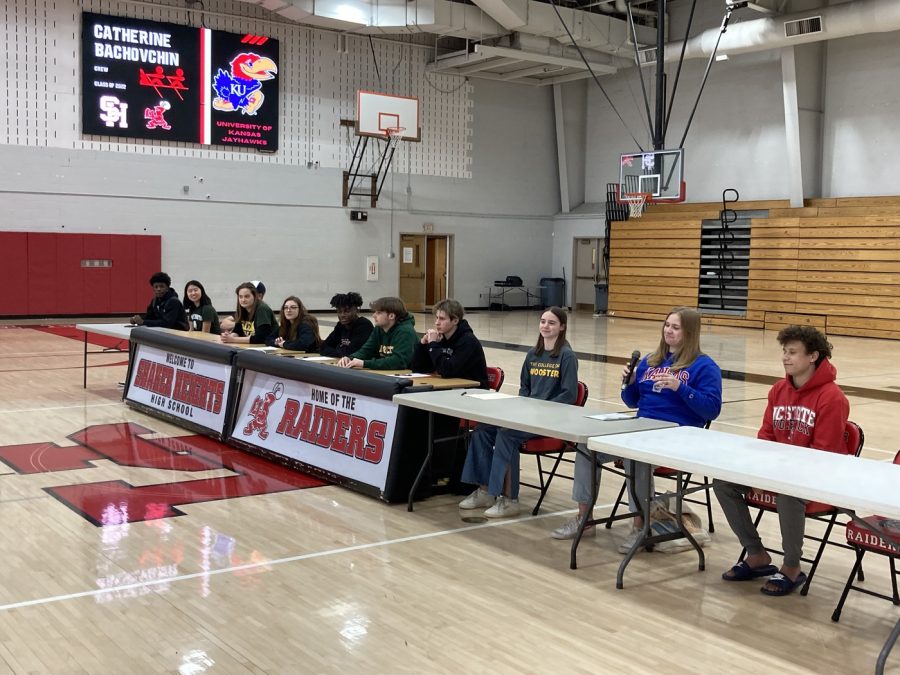 The recruitment process for high school athletes varies by sport and individual, but it typically follows a pattern of using recruitment websites, communicating with college coaches and attending showcase opportunities. Modern athletes have to recruit themselves.

Shaker Heights High School Athletic Director, Michael Babinec, says it’s the role of student athletes to take charge of their own recruitment. “I’m not actively going out as the athletic director trying to recruit you,” Babinec said. The Athletic Department is there to aid student athletes in keeping up with class requirements, but being recruited by college scouts is largely up to the athletes themselves.

Though some colleges send out letters and emails to prospects, these are often generic camp invites. Based on conversations with coaches and school counselors, students make a list of prospective schools and get in touch with them.  After contact and evaluation from college coaches, athletes can verbally commit to play for a school.

Shaker Heights High School senior Kate Meinhard, recently committed to play Division III soccer for  Lewis and Clark College. She used Hudl, a tool for coaches and athletes to review game footage, to share film with prospective schools. “During my senior high school soccer season I started working with the athletic directors to get a Hudl account set up for the team and got all the games that were filmed to be added on,” Meinhard wrote. She then made a Google Sheet with programs she was interested in.  “Then I made a template email with all my grades, test scores, accomplishments both in sports and school and sent an email to all the schools on the Google Sheet,” she wrote.

Another approach was taken by senior Danny Young Jr., who committed to play Division I basketball for Cleveland State. Young was approached by college coaches who watched his AAU games. “They got my information off the NCAA database where it has all of my social media handles. All college coaches use Twitter to come in contact with recruits; then they will ask for your phone number to stay in contact with you,” Young wrote.

Libby Kiker, a senior on the Shaker Heights High School women’s soccer team, used college showcases through her club team and reached out to coaches to view a tournament she was attending. “I just introduced myself, told them who I played for, what position I played, gave them my schedule for my tournament like what field I would be playing on at what time, and asked if they would be able to come watch me play” Kiker wrote. Not all coaches responded, which is normal. From there Kiker went to college identification camps she was invited to and she mainly took control of the process herself. “I pretty much did most of it on my own with the help of my parents, plus my club coaches gave us a rundown of things we should do,” she wrote. Kiker recently verbally committed to play collegiate soccer at the College of Wooster.

College athlete recruitment varies by athlete, division, and sport but it commonly utilizes social media and film viewing sites. Coaches reach out to view players in person during games or camps but mainly the process is in the hands of the athlete themselves. Young wrote, “I took visits to multiple schools; they would take me on tour around the campus. It was a fun process.”