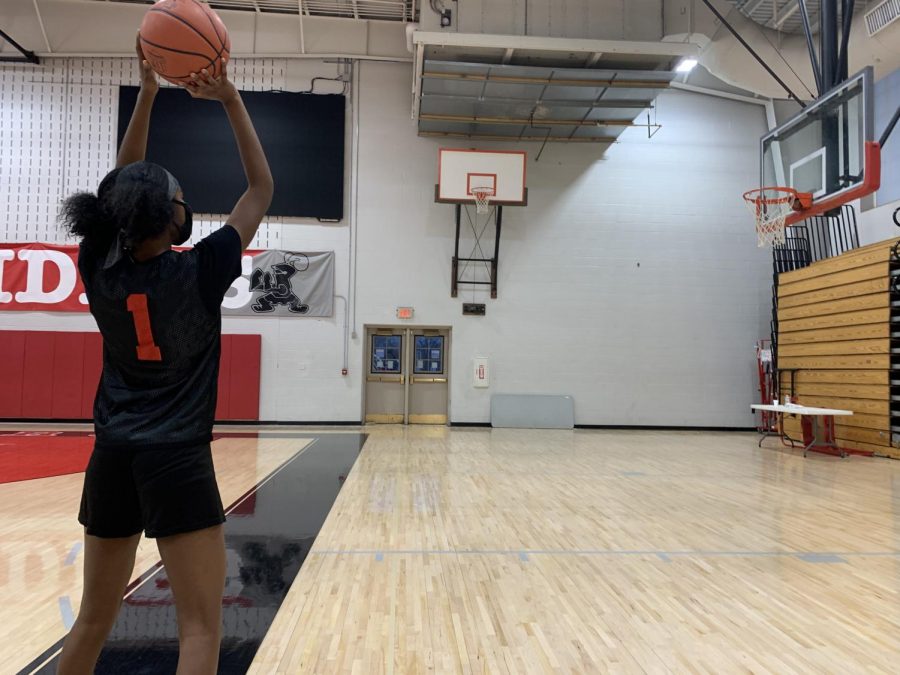 Sophomore Meilani Walker wears her mask as she plays basketball in a practice.

The district announced the resumption of all winter sports onsite practices. No decision has been made about the restart of athletic competitions.

A Dec. 6 email from the Athletic Department stated, “High School and Middle School in-person winter sports practices will resume this Tuesday, December 8 with a staggered schedule and restrictions on the number of practices per week.” The email was sent through Final Forms, a website used by the district for all students participating in interscholastic athletics.

On Nov. 18 the district suspended all winter sports in keeping with the Cuyahoga County Board of Health’s release of a 28-day stay-at-home advisory.

“We felt that Dec. 8 was a good point to try and at least restart practices. I think we feel good about where our protocols are at,” Athletic Director Mike Babinec said. “There wasn’t a specific target date, but it just felt like Dec. 8 was a good day and consistent with what other schools were doing.”

Dr. David Glasner, superintendent, said Tuesday was not a “magical” date to restart sports. “It did give us time to talk to other districts, see what’s happening, and make sure we’re in line with other districts and put in place plans to ensure a safe return with practices,” he said.

Sophomore basketball player Meilani Walker said she is very excited to return to the winter season. “I am looking forward to playing games and actually getting to see how our team does against different teams,” she said.

Senior hockey player Max Benicasa is excited to play with his teammates for a final season. “I think hockey is the type of sport where you play from a really young age and you grow up with the guys on your team. You learn to skate almost before you learn how to walk, and you grow up with all the kids in the youth program. I’ve been playing with these guys since I can remember,” he said. “You want to send off your senior year in a good way.”

Junior basketball player Danny Young Jr. said he is excited to play again and be with his teammates. “I feel like if we just wear our masks and follow the safety protocols, we’ll be back soon on the court,” he said.

Senior swimmer Charlotte Cupp questioned the decision. “I feel like we shouldn’t be having sports if we don’t have school right now,” she said. “I feel like it is not even worth it to just practice for nothing and to put ourselves at risk for something we don’t even know will happen.”

Babinec said he is excited for winter athletes to get the same opportunities that fall athletes had. “The fall season was literally the only season I can remember where people were truly excited just to be able to play, and I think I’m excited for this to occur for our winter athletes,” he said. “I want them to remember just how much they enjoy playing the game and not so much worry about the number of games, who we are playing, when we’re playing and what time we’re playing.”

Men’s basketball coach H. Danny Young, Sr. said this season is important to him because the last season’s men’s basketball playoff run was cut short when the OHSAA suspended all athletic competitions March 18. “It’s been a true test of looking at things through a broad lense,” he said. “The team was in the position, I think, to make it to Columbus. It was a sad moment, and here we go again. We have nine guys back from that team, and they are ready to put their mark on it,” he said.

Glasner said he is excited to see the school spirit in the community that emerges from sports.

The Athletic Department also released a winter sports restart plan that states the start dates of all sports practices. Teams are only allowed three practices the week of Dec. 7 and four the week of Dec. 14. All athletes and coaches must still complete pre-activity medical screenings, which include a temperature check and the CDC COVID-19 questionnaire. Teams must maintain a daily attendance sheet for all participants and must be consistent in the use of hand sanitizer before, during and after practice.

Young said his players sanitize their hands five to six times during practice, on top of following other protocols the distinct instated. “You come right to the gym with your mask on. When we have breaks, we try to socially distance, and you have to leave the building quickly with your mask on. If you are carpooling, try to limit the number of players and wear your mask. We take temperature checks that we have to log into Final Forms, and we have to ask all of those questions about symptoms,” he said.

Senior swimmer David Szoke does not think he will return to practice. “I don’t think there can be anything done to make me feel comfortable enough at this point with the amount of cases that there are,” he said.

Director of Communications Scott Stephens emphasized that participation in sports is voluntary. “You and your parents make a decision for you to participate in this. If you had health issues with your family and felt that it wasn’t in your best interest, you wouldn’t be compelled to. Sports are always something that are voluntary,” he said.

“I know we are going to have to start to wear masks on the ice,” Benicasa said. “We are going to do everything we can to keep playing and have a relatively safe season.”

Women’s basketball, men’s basketball, fencing and gymnastics are all scheduled to begin Dec. 8. Wrestling is set to begin Dec 9. and cheerleading Dec. 14. Indoor track practice schedules were communicated by coaches to athletes, and the hockey schedule is “to be decided,” the Dec. 6 email stated.

Benicasa explained that Thornton Park Ice Arena, where the high school team plays, is currently closed. “Practicing is really going to be when we can and where we can. We’ve had some open skates without coaches, but finding a practice location is our biggest problem,” he said.

The Ohio High School Athletic Association reaffirmed its decision to allow individual school districts to choose whether to continue winter sports Nov. 20. According to the OHSAA, 56 percent of schools that responded to a survey voted to move forward with the winter season; 33 percent voted to take a break and establish a statewide restart date in January; and 11 percent voted to suspend sports until further notice.

“If things somehow turn around in the spring, I would hope that winter sports could happen at the same time as spring sports, but I doubt that there would be any competition or a way to do it safely. I don’t think the OHSAA is going to let that happen,” Szoke said.

Junior hockey player Maclin Stupay is worried about other teams starting their seasons. “We’re hearing about all of the private schools playing and we’re missing that. But we’re just trying to have fun with it this season and play our best for the time we have on the ice,” he said.

LEL member schools Bedford and Garfield Height have suspended all athletic activities until at least Jan 4. Babinec said the other LEL member schools will restart practices and games within the coming weeks. Cleveland Heights, which also suspended all athletic activities Nov. 18, plans to return to practice Dec. 14 and restart competitions Dec. 18 without any fans. Shaw, Maple Heights, and Warrensville Heights will start competitions Dec. 14.

“I know that the discussion about playing games with no fans is starting to gain more traction as a possibility of getting games started sooner,” Babinec said. The community has to realize that in order to play games, the district will have to make compromises about the number of spectators it can allow, said Babinec, and to emphasize that sports is about the safety of students and coaches.

“Honestly, with winter sports, it’s just hard because they’re all inside and it’s difficult to practice with the mask on for all sports,” Cupp said. “I don’t think we should have winter sports right now. You can’t expect everybody on a 20-person team to stay at home all the time, every day, and not see anybody and stay away with their family as well.”

Walker is also concerned about playing in competitions. “I’m not sure what other schools are doing and if their students are taking it seriously. So it depends on who can we play instead of will we be able to play,” she said.

Young also said the opportunity to play games depends on the cooperation of athletes and the community. “This COVID thing is serious, and we have to take it really seriously. I texted my boys last night, ‘Yes, we are back practicing, but we have to be very cautious when we are away from practice.’ I’ve been trying to send them little messages to keep them aware of what we’re up against and keep them aware that it only takes one kid or a coach to get it and have us shut down,” he said.

Glanser said that it is important to introduce sports practices as well as onsite learning, which the district continues to plan for. “With all the activities that our students are engaged in, sports, like other opportunities, gives students the opportunity to connect with each other and provide students with structure with the opportunity to improve and maintain physical well being,” he said.

Benicasa said, “If we only get some practices, then we’ll do that. I’m hopeful we’ll see a game or two, if not more. It’s up to each and every school to follow the guidelines and be as safe as possible.”