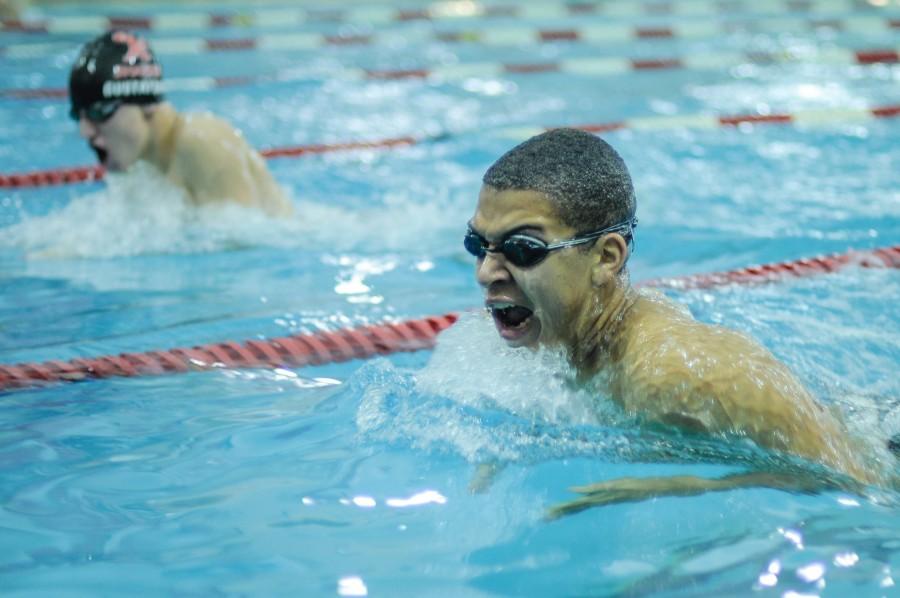 Max Gustafson led Raider swimming back to states this year.

The sophomore is the first Shaker swimmer to qualify for the state meet since 2013. He placed 17th in the 500 yard freestyle at the state meet in Canton.

Gustafson’s success capped off a successful year for both the men’s and women’s swim teams. The Raiders sent 12 individual swimmers and five relays to districts as well as Gustafson to states.

Both the men’s and women’s teams finished 2nd overall at the Feb. 15 sectional meet.

Gustafson was optimistic he and the team would do well leading up to the meet.

“I was very excited when I made it and I was very confident going in, but there’s always the chance that you don’t make it,” Gustafson said. “I was leading towards the end of the race and I knew that the first two finishers qualified automatically, so at that point I knew I was going to make it.”

And although Gustafson is just a sophomore, the big stage of the state meet did not intimidate him.

“It was really an amazing experience to compete with so many insanely fast swimmers,” Gustafson said. “I’ve been at other large meets in the past with my club team, however none of them compared to the state meet.”

“It is said to be the best high school meet in the country, and it was just an honor being a part of it,” Gustafson said.”

“Not qualifying for states was pretty awful, especially knowing that my time last year would have qualified,” Crowley said. “My goal all throughout high school was to qualify for states, but I had an amazing season, so I’m just brushing it off and getting reading for college swimming and trying to make it to qualifying for NCAA’s.”

Head Coach Eric Peterson attributed Gustafson’s and Crowley’s success, as well that of both teams, to competing against some of the best competition in the state.

“We have been fortunate to have some wins against some quality opponents,” Peterson said. “I think joining the Northeast Ohio Conference has been the biggest help for us. It has significantly raised the level of expectations for our teams’ performances.” Shaker  joined the NOC. in 2013.

“This year we all began doing exercises before practice to prevent injuries. Also, our coach has made morning practice mandatory the past two years, which I think helps everyone build their stamina and get a better feel for the water,” Brindza said.

“I think the girls’ team has definitely improved from last year in terms of dedication and competitiveness,” Lo said.

Crowley agreed that the team had come a long way.

“I can’t believe how much this team has grown, especially with our victory over Solon,” Crowley said.

The men’s team also attributes its improvement to increased dedication.

“We’ve been training at a much higher level this year and many more people have been attending morning practices,” said senior captain Austin Yoder. “On top of that, guys have done a great job at keeping each other motivated to succeed.”

Peterson also complimented the swimmers’ commitment and the role of his coaching staff.

“Both the girls’ and the boys’ teams have been very dedicated to working hard,” said Peterson. “I also am fortunate to have a very dedicated and knowledgeable staff. That helps keep the message clear and helps the swimmers improve consistently.”

The swimmers also credit team chemistry for their wins.

“Often people see swimming as an individual sport, but I have to say, we are closer than any other team could be,” said Brindza. “I think it’s safe to say that our success is not only from hard work in the pool, but also from how well we support each other.”

Yoder believes the swimmers developed their strong chemistry during the their intensive practices.

“Swimmers are always complaining about rough practices and having to get up early, but I think that is one of the things that brings us closer together,” said Yoder. “We all go through the same struggle together, and so we spend so much time in the pool together that it brings us closer.”

Gustafson believes this success will carry into next year.