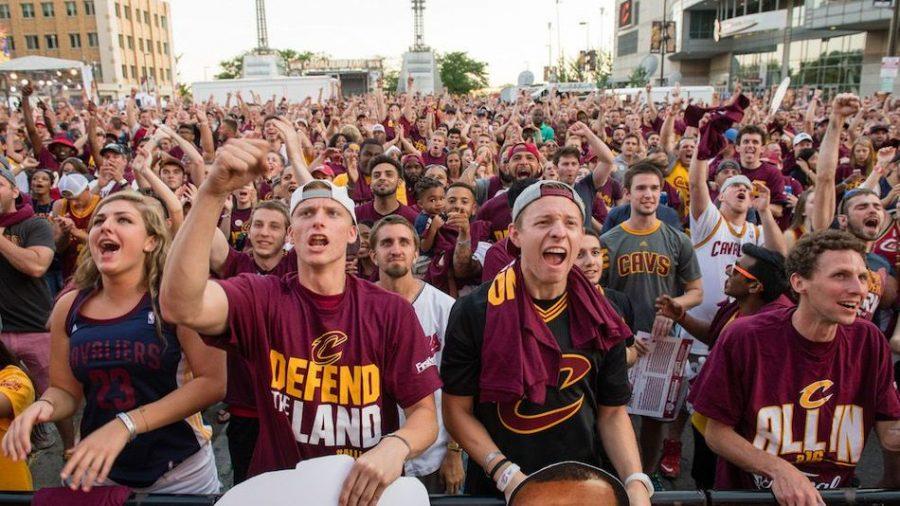 Cleveland sports fans finally had their dreams come true as their 52 year championship drought ended with a 93-89 victory for the Cleveland Cavaliers over the Golden State Warriors on Sunday.

I was in Montana when the Cleveland Cavaliers won the first Cleveland professional sports championship in 52 years. I watched the game in a small bar (ironically called The Land of Magic) with no one from Cleveland.

As I yelled, fist pumped, and nervously bit my fingernails throughout the game I drew frequent looks from the Montana citizens. But, they don’t know how much Cleveland sports mean to the people of Cleveland. We have continued to root on our teams for all these years, and our loyalty has finally been rewarded.

Once the game ended, others in the bar saw coach Tyronn Lue and star LeBron James sobbing. “Gosh, why are they so emotional about this?” they asked.

“Because its taken 52 years for this moment to happen,” I replied.

When the buzzer sounded, I proceeded to dance outside the bar like I had just won the lottery. The Montanans looked at me like I was crazy. And maybe I am crazy, crazy for my Cleveland sports.

About a half an hour after the game my excitement from the victory turned to disbelief. We Cleveland fans will no longer be pestered for our lack of championships by the rest of the world. The 52-year drought is over.

Even while I’m in Montana, I can feel the excitement and celebration pouring out of The Land. I have watched ESPN constantly, seeing the ecstatic faces of Cavalier fans filling the streets of downtown Cleveland, coming to the airport to welcome their championship team back home and all of them celebrating this new feeling of victory.

“When the game ended some friends and I went driving down the street, and it was like something straight out of a movie,” incoming junior Ben Stager said. The whole city celebrates this team, no matter how much money you have, what race you are, or what religion you follow. This championship has brought everyone together.

“This city has been through so much and it’s so amazing to see everyone come together,” he said.

When I talked about the Cavaliers and their play on the court, the people watching the game with me in that Montana bar were surprised to hear me say, “We need to move the ball more,” rather than, “They need to move the ball more.” I realized that we Cleveland fans internalize each of our teams’ blunders and mistakes, whereas other sports fans are less personally involved.

We are our teams; We beat the Golden State Warriors in the NBA Finals this year, coming back from a 3-1 deficit for the first time in finals history. In the last four minutes of Game Seven, we held one of the most explosive offenses of all time to zero points.  “The curse is over and we made history. No other city can say they did that,” said incoming junior Hayden Steiss.

Even when I am 1,737 miles from Quicken Loans Arena and downtown Cleveland, I still feel like I was a part of this championship. I am in the clan of Cleveland sports, which includes all the players, coaches, management and especially the fans. We all won this NBA title.

And now that the young Cleveland fans at Shaker Heights High School have experienced a championship, even when we all go off to graduate and live in different places all over the world we will always remember the joy of this victory. No matter where we end up living, we will all remain members of the Cleveland sports fan base.