After Spectators Clash With Police, Men’s Basketball Loses Game at Half 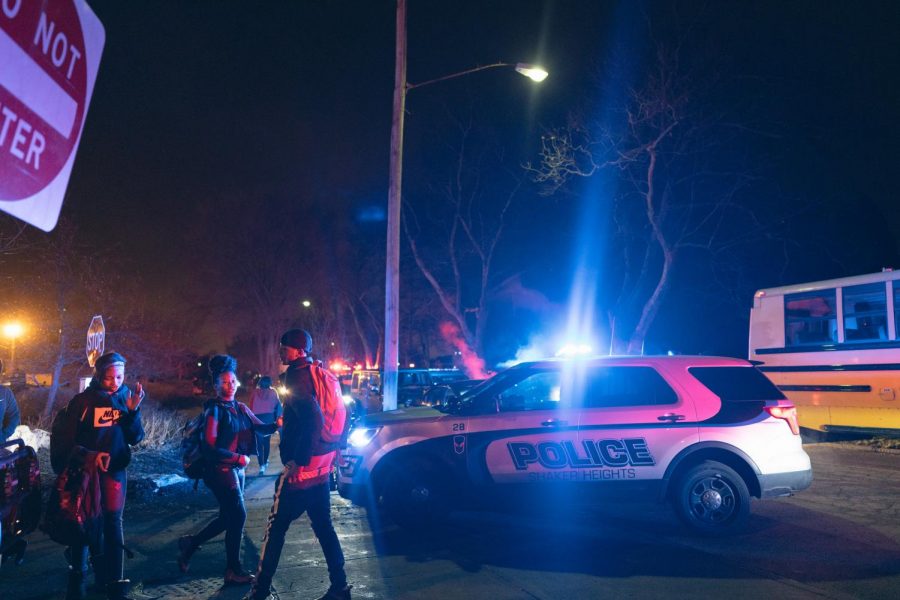 The men’s home basketball game last night against Charles F. Brush High School was canceled after spectator fights broke out during halftime, leading to one arrest and the chaotic exodus of fans. Police presence and confusion led to fears of gun and pepper spray use, which school officials and police dispelled.

The incident occurred while eighth-grade parent and student orientation proceeded in the large auditorium. The audience filled the lower level of the auditorium.

According to Commander John Cole, the Shaker Heights Police Department apprehended a 21-year-old Euclid man on charges of disorderly conduct and resisting arrest.

In an email response to The Shakerite last night, Executive Director of Communications Scott Stephens stated, “Tonight’s boys’ varsity basketball game between Shaker Heights High School and Brush High School was canceled due to an incident with spectators at halftime. District security responded and resolved the situation. There were no weapons involved. The Shaker Heights City School District will work with law enforcement and South Euclid-Lyndhurst school officials to evaluate tonight’s incident.”

According to the accounts of more than 11 students from both Shaker and Brush who attended the game, the situation quickly unraveled when Brush spectators ignored Shaker security personnel during the first half of the sold-out contest.

According to Brush senior Jake Young, who was seated on the Brush side, the issue began after a Brush player was fouled and returned to the bench shaken. He was visited by two Brush spectators, and Shaker security personnel asked them to leave the bench area. The spectators did not comply, and the Brush team left the court for halftime. Eventually, the conflict drew the crowd’s attention, and “more people joined in,” Young said.

As mayhem erupted from the Brush side of the gymnasium, the situation spilled onto the court, which prevented the Shaker team from exiting. Police detained the Euclid man on the middle of the court and eventually arrested him.

Junior Shaker basketball player Eric Mudd said he saw the arrest. “We were standing on the court, and I saw the guy having an altercation with the security guards and the police. The police then detained him and put him on the ground and handcuffed him,” he said.

After the police escorted the man out of the north gym, the Shaker basketball team left the court for halftime. The Shaker cheerleading team then took the court to complete their halftime performance.

Shaker senior Izzy Markey, attending the game as a spectator, said she watched as a girl who was reportedly having a panic attack tried to exit the gym into the lobby. Markey said she did not know where the girl attends school; other sources interviewed could not identify her. “The cops stopped her. She was fighting back. She punched someone. She was getting really physical with a cop, and they were trying to detain her,” Markey said.

Markey continued that the girl “got away” from the police officer. She said she then heard someone yell that there was a gun, which prompted the crowd to run and attempt to leave the gym through the stadium exit. Police made spectators return to the gym. “It was bad. There were a lot of people there,” she said.

Senior Carter Belk confirmed Markey’s story and said he also heard “people yelling, ‘Gun!’ ” He said he was trying to leave when “all the cops came and started stopping everybody.”

Sophomore Mykayla Williams, who was at the game, said she was both scared and angry. “I was upset because both Shaker and Brush students were being very immature and childish with a very serious matter going on,” Williams said. “I was scared because the police were yelling and basically chasing kids, and with the history of police and African-American people, you never know what can happen.

“An officer placed his hand on a taser while making eye contact with me, and it was very scary.”

Sophomore Victoria Helmick also reported feeling scared and that her knees were “shaking.”

“I am very proud of the Brush Student section, Fans and my team and how everyone conducted themselves during the altercations on the other side from the game tonight. Brush was leading at the half 39-29 when the shaker police called the game. @BrushAthletics @mgoul @NateBarnes_”

Through an assistant, the Brush athletic director declined to comment on the tweet or the events. The Brush High School principal had not returned a call seeking comment by the time of publication.

While Shaker was present on the court to witness the detainment of the Euclid man, they were meeting in the multipurpose room when the second incident occurred.

Senior forward Harry Carroll spoke about the team’s reaction as they gathered during halftime.

“We all thought we hadn’t played our best half. We were all ready to make our changes,” he said. They were walking down the hall ready to return to the court when they were denied entry by a trainer. At this point, Assistant Varsity Coach Lyndon Brooks returned and told the team that the game had been called off.

“We were all annoyed because we were down by 10 at the half. We were mad, we were angry and we wanted to come back,” Carroll said.

Mudd said, “I wanted this game so bad. It’s sad when you can’t finish it because of other people.”

The game is considered a loss for Shaker (11-6) in adherence with OHSAA rules that allow schools to mutually decide whether to abandon a game after a disruption outside the control of the administration. After the win, Brush improves to 15-2.

Shaker Athletic Director and English Teacher Michael Babinec talked about the decision to cancel the game. After being approached by a police officer who said he thought the game should be called, Babinec and the officer met with Principal David Glasner and the athletic director from Brush, Rob Atwood. They mutually decided that canceling “was really in our best interest for the safety of the teams, cheerleaders, coaches and spectators from both sides,” Babinec said.

Brush led Shaker 39-29 at the half. The schools decided not to continue the game at another time in order to “let things quiet down between both schools” and because the teams are “nearing the end of their seasons,” Babinec said. He said that because the Jan. 22 game had already been rescheduled for severe weather and because it was not a conference contest, both schools felt that continuing the game at another time was not in either school’s best interest.

While the commotion played out in the north gym last night, the large auditorium was in use for eighth-grade student and parent orientation, during which attendees learn about the high school, its faculty, curriculum and activities.

Parent Betsy Potiker, who attended the orientation with her daughter, is the mother of two Shaker graduates.

“When we walked outside, it was just chaos. There were tons of high school kids. There were at least 10 police cars, there was a fire truck, there were policemen holding dogs,” Potiker said. “They were just yelling at these kids to get off the property, I think, trying to get things in order peacefully. But then you have these new high school parents walking up, who maybe didn’t go to Shaker, that does not bode well and does not put Shaker in the best light.”

Potiker said the incident is another instance of bad press that Shaker has endured this year. “We’ve just had a series of bad luck and bad decisions, and we need to get our act together,” she said.

“I do think it’s a great school,” Potiker said. “Students are passionate and engaged, and I don’t think that’s changed.”