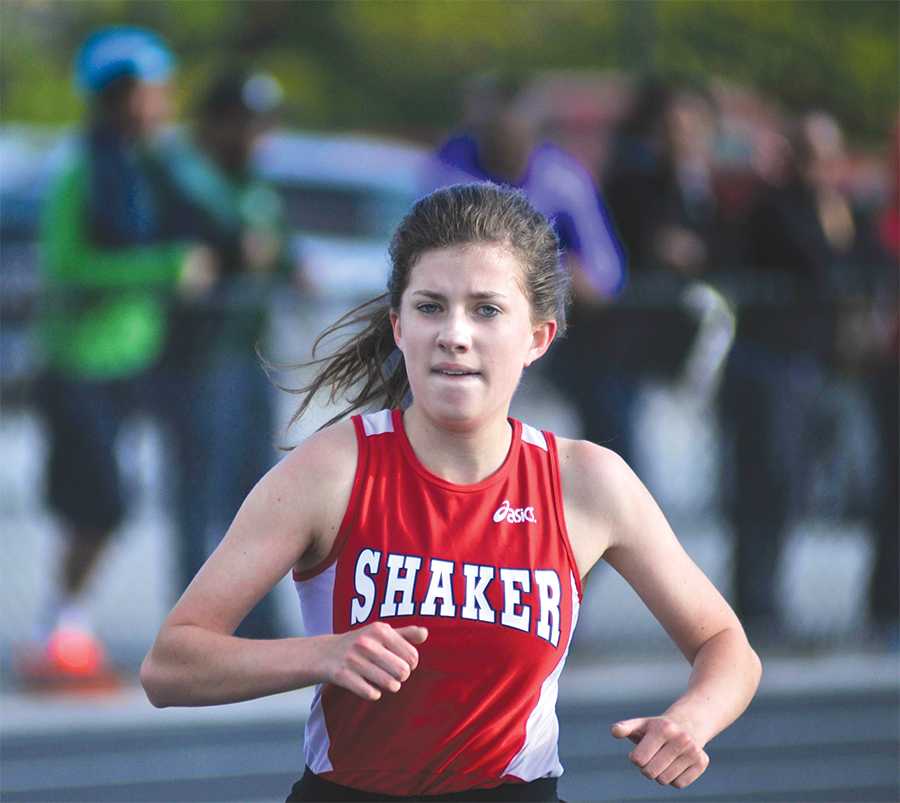 Senior Chloe Binczyk holds the school record in the 3200-meter run with a time of 10:57. Binczyk has qualified for state competition twice for cross country, twice for track and four times for indoor track.

These are just some of the accolades garnered by senior track and cross country runner Chloe Binczyk. Binczyk has qualified for the state competition twice for cross country, twice for track, and four times for indoor track. Her time in the 3200-meter run is the current Shaker record.

For Binczyk, running is in her blood.

Binczyk defended her district championship May 23 in the 3200-meter run — eight laps around a standard track and equaling roughly two miles — clocking in a personal record of 10:57. “It was nice to come in as district champ, but it also made me a bit more nervous,” Binczyk said.

In middle school Binczyk ventured into other sports such as softball and soccer, but eventually she settled in with cross country and track. “I would play midfield so I would have to run around a lot,” Binczyk said. “I wouldn’t really get tired and I decided I liked running better.”

Her first year in high school was met with immediate success, joining the state-qualifying 4×800 relay. Binczyk went on to qualify for the cross country state meet her sophomore and senior year and the track and field state meet her freshman and junior year. She will attempt to qualify for states again in the 3200-meter run at the Austintown-Fitch Regional Meet May 30.

Binczyk’s sister Alyssa also ran for Shaker with much success. Binczyk believes that watching her sister run inspired her to do the same. The two sisters ran together in the 4×800 meter relay team that qualified Chloe for the 2011 state meet.

“Watching my sister made me want to be a great runner,” Binczyk said. “Seeing her work so hard made me want to follow in her footsteps.” Alyssa Binczyk was a state qualifier multiple times in both track and cross country and is currently running at New York University.

Binczyk describes her first state qualification as helping her get experience. “It was good because it was really relaxed,” Binczyk said. “There were two upperclassmen and they knew what they were doing, so it was kind of a practice run for when I would go on by myself.”

Dave Englander, who coaches Binczyk in both track and cross country, believes her talent and work ethic are what really helped her edge out her competition.

“Chloe has been a very dedicated, hard worker for the past four years,” Englander said. “She’s the perfect combination of work ethic and talent.”

Binczyk is a strong final sprinter. “She’s well-known for her kick. Most girls don’t start their final sprint until the 100 meters,” Englander said. “Chloe will start it with about six- to 800 meters left. She has routinely destroyed some of the top girls in the state on the last lap.”

“What she inherited from her sister, far more than talent, is the ability to outwork everyone,” Englander said.

Her success comes from many hours of hard work. Binczyk runs on average 50 miles a week to prepare for her many long-distance races.

The stress-free and team-centered atmosphere makes running special for Binczyk. “It’s two hours every day where all you have to worry about is running,” Binczyk said. “It really takes the stress away from my life.”

“I love running because of the team aspect,” Binczyk said. “I love spending time with the team, it’s like family.”

Binczyk’s teammates believe that her attitude is what makes the team run well.

“I’ve been on Chloe’s track and cross country team for three years and nobody has inspired me as much as her,” junior Ilana Sadholz said. “I don’t think I’d work as hard as I do without seeing what she can do.

“She helps keep the team calm and collected before meets and always supports everyone and encourages them to do their best,” junior Elana Ross, another teammate, said.

That effect will stay as Binczyk moves on to the next chapter in her life. Binczyk will be running both track and cross country next year for Columbia University in the City of New York.

“I’ve kinda mastered how to do it in high school I would say when it comes to managing my time,” she said. “I’m definitely nervous because things will be so different next year like adjusting from Shaker to New York City.”