With So Many Meanings, ‘Yeet’ Embodies Linguistic Spirit 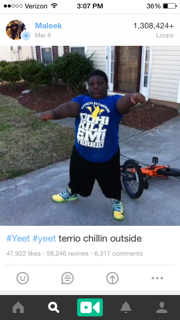 Maleek's Vine video that started it all.

A perplexing and abused neologism has infiltrated Shaker students’ vocabulary.

Perhaps Vine is to thank, or to blame, for this invasive term. The social media network, consisting of six-second clips, was the platform that debuted yeet in the spring of 2014.

It started as a dance craze that first appeared in Viner Maleek’s six-second video with a caption “yeet.” It features popular Viner Lil Terio doing a dance in the middle of a driveway. After it was posted, fellow Viner Lil Meatball responded with his now-infamous video, in which he simultaneously fired a nonexistent rifle and grooved while his friends chanted “Ya yeet ya!”

Within weeks, yeet developed from a meaningless chant to a complicated, layered word, with so many interpretations that its true definition is unknown. Now, it lurks around every corner — in classrooms, in households and on every social media known to mankind.

For a short time, there appeared to be a clear definition of what yeet really meant. It seemed that every time someone said something foolish, a bystander would laugh and say, “Yeet!” The exclamation’s insulting message was usually punctuated with a “neck,” a slap to the neck delivered as a punishment for stupidity.

Sophomore Rekarra King said yeet is “an eclectic dance of the native African Americans of the 21 century.”

Isaiah Redmond, also a sophomore, knows yeet’s entire history. “Urban American rappers freestyled to the beat and made a hit dance song, ‘The Yeet.’ ” Redmond said that yeet’s meaning is equivalent to “no,” but only one has a dance to go with it. This dance, the ‘nae nae,’ involves swaying to and fro while swiveling hips and raising a hand above the head. One is usually surrounded by an audience chanting, “Hoowah!”

However, some people don’t correlate yeet with modern dance. Junior Max Markey said yeet is “like ‘Woo!’ or ‘Cool!’.”

Here lies the source of yeet confusion: the numerous definitions.

“I think it has something to do with getting away from someone,” senior Ceci Kubu said. Her definition is unique — and a bit disturbing. While some students chant “Yeet” while dancing, others use yeet to escape conversations.

Even the unofficial, yet often accurate, definitions from Urban Dictionary are scattered. One description is “a term used to express excitement,” which vaguely agrees with some students’ definitions. Another calls yeet “a term similar to ‘alright,’ ” which completely contradicts the other interpretations.

However, yeet has a sense of patriotism. It’s one of the most free-spirited words in the unofficial English slanguage.

The lack of a rigid definition sparks some magic with the word.

“It can really mean anything,” summarized Margi Weiss, a junior.

Markey agreed, “It really means whatever you want it to.”

Yeet’s infinite conceptions leave open endless possibilities. Whether it’s chanted while dancing or exclaimed for no reason, yeet will evidently remain present in students’ vocabularies until a true definition is found. Considering neck has remained for nearly two years now, yeet will most likely stay for a long, long time.

Remember, students: with a great number of options comes great responsibility. Think before you yeet!