What About The Rest Of Us? 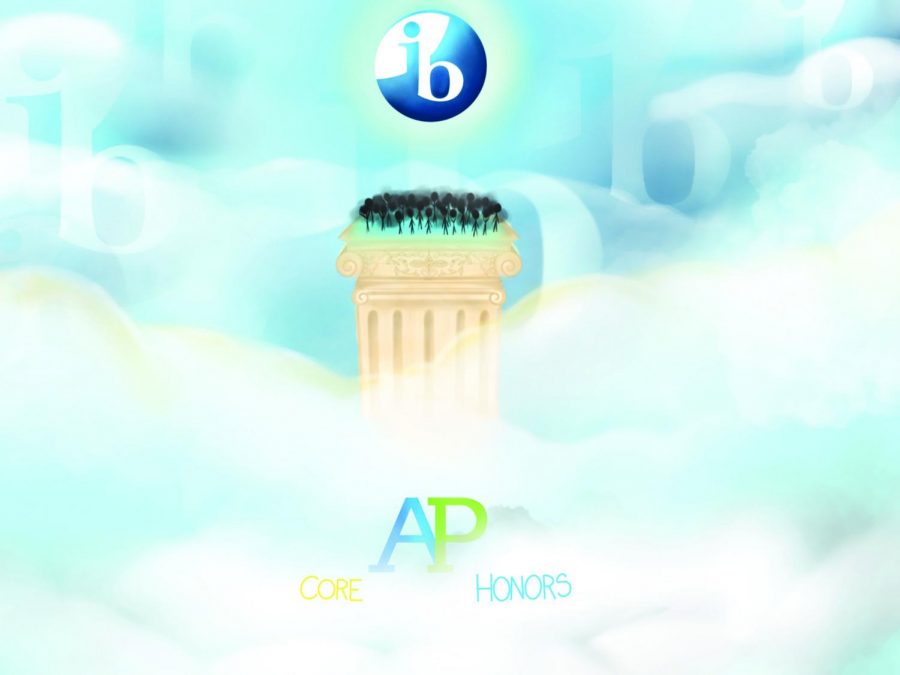 Some Shaker students face a tough decision sophomore year. Do they chose the rigorous, highly promoted International Baccalaureate program? Do they choose the other rigorous, but more well-known Advanced Placement classes? Or do they stick with challenging honors and core classes?

Shaker prides itself on being one of 10 high schools in Northeast Ohio to offer the IB Diploma Programme to juniors and seniors. The district promotes the program, and schools that offer the IB DP earn praise. Sites such as U.S. News rank high schools by, among other things, DP participation, test completion and scores and the percentage of IB students who earn the IB diploma. While the percentage of students taking IB courses has fluctuated since the district adopted the program in 2010, the overall trend is that student participation has increased, both in DP students and total students taking IB classes, as students can pursue the unofficial IB Medallion Programme. Every day, students, IB or not, see the blue IB flag flying at the front of district schools and IB learner profile posters hanging in every classroom.

College entrance test preparation companies such as PrepScholar maintain that not much difference exists in the long run between IB and AP, especially in the college admissions process. Colleges recognize both IB and AP as the most rigorous courses available, and they usually do not favor one, unless a student is applying to a school in another country. In that case, IB provides an advantage. Both programs can secure college credits if students earn high enough scores on their tests, and some state universities offer tuition benefits to students who earn the IB Diploma. Both have a weighted grade point average of 5.0, and both induce lots of stress-filled late nights.

The most significant difference between the programs exists in assessments. Most AP exams include multiple choice and extended response questions. IB exams employ extended response questions. IB students also complete IB-defined assessments for each class. The Individual Assesment is a 20-hour project that culminates in a research paper that accounts for some portion of the final class grade. Depending on the course, AP and IB require different texts. In the case of English classes in which both AP and IB students are enrolled, IB requirements for literature prevail; AP does not require particular literature texts.

These differences, however, do not alter the  essence of academic disciplines.

Not only do these classes create their fair share of stress, but they also create a financial burden. AP and IB exams are expensive. AP exams cost about $94 each, and some courses, such as AP Economics, require two tests and two payments. IB exams are $119 each, and IB DP students must also pay a $172 annual fee, according to the program’s official website.

These IB fees, which accumulate over a student’s junior and senior year, can cost the DP student $720, according to Shaker’s website. But DP students taking six exams and paying the two annual fees would pay $1,058.

With its IB logo and prominent declaration of K-12 IB status, the district homepage illustrates the marketing benefit Shaker gains from IB affiliation. But students outside the DP do not feel that they receive a benefit, and no one seems to be talking about it.

A district committed to this inflexible and demanding program is a district that must see DP enrollees as golden students. While I would never criticize DP students for participating in the program, I do question the district’s IB-heavy allocation of resources and opportunities.

One example of IB DP privilege is evident in class scheduling. Because the IB requires DP students to complete particular courses in order to earn the IB diploma, DP students’ schedules are completed first, by hand, to ensure the master schedule allows them to enroll in every class they have requested.

This approach hurts other students because it limits periods during which some courses are offered. As AP/honors students, a classmate and I wanted to take a French class, but we both ran into scheduling conflicts because the French class we needed was scheduled with DP students in mind, meaning neither of us could complete our credit in school. This meant we had to hire a tutor, take it at John Carroll University or Cuyahoga Community College this year or wait until next year to take the class.

Since adopting the DP, the administration has insisted on combining some AP and IB classes rather than creating IB-only sections. The DP offers High Level and Standard Level tracks. Thus, teachers assigned to these classes teach at least three unique curricula and prepare students in the same classroom for three unique standardized tests. At best, IB and AP students receive half the attention that students in classes dedicated to either IB or AP receive. Offering separate IB and AP courses is the practice in most schools.

If students could enroll in smaller classes dedicated to either IB or AP, they could perform better nationally. Instead, although AP students outnumber IB students in AP/IB classes, teachers are compelled to focus on IB students in order to complete and submit their required IB assignments to the IB.

In 2013, the administration combined AP Literature and IB Literature, and AP students’ exam scores were generally lower than those of previous years. Only three students earned scores of five — on a scoring scale of one to five — on the 2013 AP Literature exam, while 17 students earned a five in 2012. On the other hand, Shaker DP students averaged a score of 5.13 on the IB English exam, which was higher than the worldwide average of 4.77.

This drop in AP Literature exam scores coincided with an exam question that required students to write an essay about a novel of their choice. Students in that AP/IB Literature class read two novels during the first semester, and during second semester, they read plays and other genres to prepare for the IB exam, according to a November 2013 Shakerite story, “Tests Raise Doubts Over AP/IB Mesh,” by former Campus and City Editor Abby White.

This is an outrageous amount of spending, especially because the district is cutting teachers over lack of sufficient funding. In a December 2018 story, Shakerite Investigations Reporter Ashley Sah documented the school board’s decision to eliminate 10.8 full-time teachers by the 2018-19 school year and eliminate 19 additional positions by the 2019-20 school year: six elementary teachers, four middle school teachers, three high school teachers and one support teacher. Three administrative and two clerical positions will also be cut in this school year.

When the district seizes upon declining enrollment, documented in a May 2018 story by Print Managing Editor Emet Celeste-Cohen, to cut teachers, class sizes increase — and individual attention, which is proven to benefit learning, decreases. Spending $332,753 or similar amounts annually while also cutting staff and increasing class sizes suggests that the district is more concerned about including the IB brand in its PR materials than about every student learning.

If the district would maintain faculty staffing, class sizes could shrink on all levels, meaning students in core and honors classes could gain more one-on-one interaction with their teachers, which could encourage more students to take higher-level courses.

Shaker wants to narrow the achievement gap that students feel day to day, but spending money to maintain teachers’ IB training and to employ IB coordinators to manage the program’s many demands means that students in AP, honors or core courses are crowded into bigger classes, where they get less attention from their teachers. Why doesn’t the district focus on Shaker’s core issues, such as the achievement gap?

In a Dec. 3, 2018 panel discussion hosted by the Student Group On Race Relations, Cleveland State University Associate Professor Anne Galletta said that funding is an issue in closing the achievement gap. If a school had enough funding, it could decrease the gap. So why is the district spending so much money for primary and middle school students to get an IB education, when the majority of students will not be participating in the DP in the high school? Why isn’t that money used to help the other hundreds of students and their educations? And why is the school using the DP to improve the experience of upper-tier students and expanding the achievement gap when we already have AP — a cheaper yet equally esteemed program — in place?

Instead of being known for IB, Shaker could be known as the school that offers equal opportunities for all of its students.