We Can Do More

Political movements should be commitments, not trends 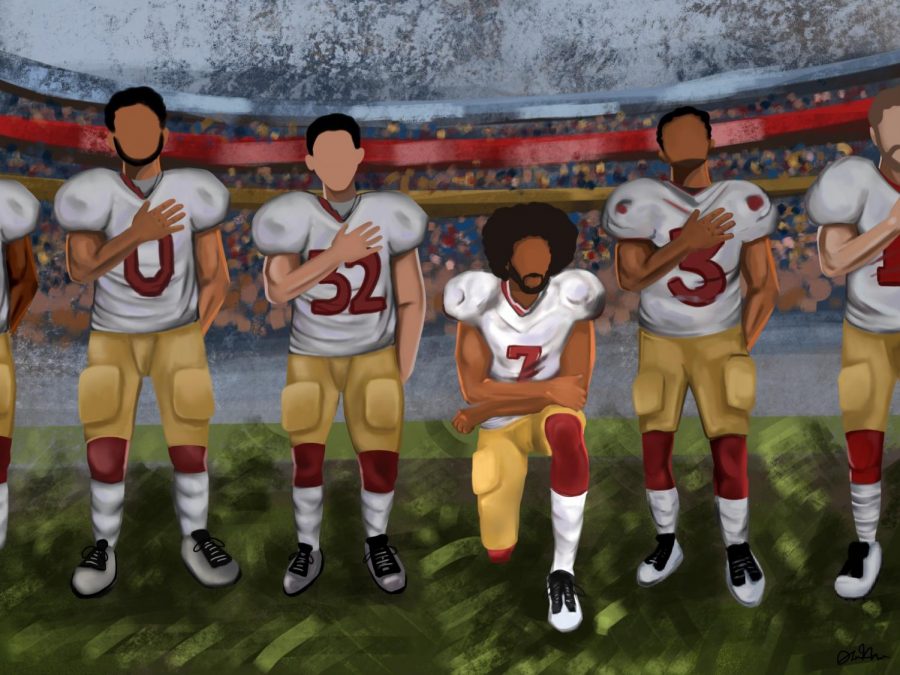 Activists in the United States are fighting to keep bigotry from defining our nation. Time and time again, in dire necessity, we fight back with advocacy and justice in order to remain the land of the free.

Bigotry has lead our nation too many times. Systematic racism in America remains a given, stemming from our horrific and inerasable past. But on Aug. 14, 2016, National Football League player Colin Kaepernick embodied the spirit of revolution in the United States: He knelt during the National Anthem. He risked all the effort that brought him into the NFL in order to shed light on police brutality.

By kneeling, he took a stand for all victims of systematic racism. This symbolic moment snowballed into a movement. Throughout our nation, people — from professional athletes to high school students — knelt in solidarity with all those affected by systematic racism and police brutality.

Though this protest elevated awareness, adequate, revolutionary change has not followed. Our government allows African Americans to be arrested two and a half times the rate of white people.

The judicial system favors police officers over innocent, unarmed citizens. Under suspicion for selling loose cigarettes, Eric Garner was held down despite saying, “I can’t breathe” 11 times, and the New York City police officer who killed him was not indicted. His story is what Kaepernick took a stand for. The scars of America’s racist past have not faded despite the aims of people like Kaepernick.

Racial injustice prevails in America, and yet, the more sporting events I attend, the less I see people kneel.

Participating in a protest is a personal decision, and many who align themselves with the movement against systemic racism do not kneel. That’s not the problem. The problem is that people who knelt after Kaepernick did, who pledged to fight against systematic racism with this symbolic act, have forgotten about the cause and moved on to participating in the next popular political trend.

Shaker Heights is known for being a liberal community, one that is open to discussion and promoting progress. Few consequences met students who knelt for the National Anthem beginning in the fall of 2017. Students did not fear repercussions when they walked out to promote gun control on March 14, 2017 and stood with the victims of the Parkland school shooting, which had occurred one month before. For the most part, Shaker accepts all cultures and fights against harmful stigmas. Still, the causes Shaker supports come and go.

I can’t say that I’m the perfect example of turning a fad into a dedicated cause. Almost two years ago, following the Parkland shooting, my friend and I began a website to promote common-sense gun control. We had our own table at the March For Our Lives protest in 2018 in downtown Cleveland and passed out flyers to spread awareness for gun control. About 200 people joined our email list. At first, we constantly sent out reminders, news and ways to continue activism for sensible gun legislation. As the months passed, our emails dwindled. Soon they stopped. Only recently, sparked by national tragedy for the umpteenth time, we updated our website with current facts and continued our efforts. 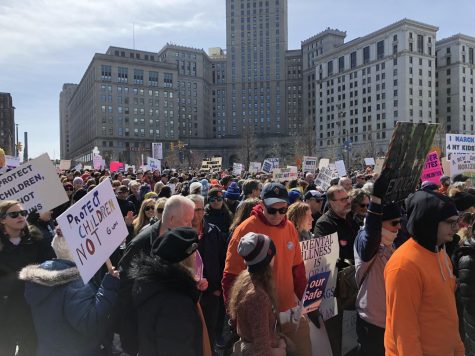 Mae NaguskyProtesters call for gun control at the March for Our Lives in downtown Cleveland March 24, 2018.

But what has happened between the Parkland shooting and now? Gun legislation has not made it past the Senate and into law. More and more people have died from gun violence.
This column is not intended to shame and criticize those who have let these movements drift to the back of their minds. It’s a reminder to tear away the cobwebs from these important ideas and remember that protests aren’t trends, they’re commitments.

By posting on your Instagram story every time tragedy strikes, which in recent years has been too often, you are raising awareness and aligning yourself with the resistance. But too often, a singular post is the extent of people’s reactions. While I appreciate every single post, we need to do more.

For example, reproductive rights has been relevant to recent state legislation. Though abortion was ruled legal in 1971 in the Supreme Court case Roe v. Wade, more than 20 states, including Ohio, have taken steps to strip this right from women. Ohio’s “Heartbeat Bill” regulates abortions so they are illegal after a fetal heartbeat is detected (at about six weeks), a point at which many women do not yet know they are pregnant. The irony of this bill is that the heartbeat detected at six weeks is not a real heartbeat, but a pulse created by electrical activity of the premature cells. When this bill came into light, it was disputed all over social media, and the immediate and passionate response of equality and personal stories was inspiring. In July, the bill was blocked by a federal judge.
But this threat to reproductive rights is not over.

According to Legislative Tracker, new abortion bills are coming up in Alaska, Louisiana, Michigan, Missouri and Pennsylvania.

Even for those who don’t live in one of these states or others where such laws have been in the works for years, the point of passing them is to move them up to the federal level, through court challenges, where they would affect every person in America. Anti-choice laws are not a trend. Our fight against them shouldn’t be, either.

Signing petitions at the Planned Parenthood website, keeping up to date on the latest abortion bills and calling your legislators are all ways to get involved that won’t upend your daily life.
Protests are not trends; they determine the future of our nation. Being politically active has become a way of socializing, but truthfully, it is a dedication that requires time and passion. In a community privileged with the resources of Shaker Heights, we all can afford to take advantage of the diverse clubs and organizations available to us. Not enough of us try.

Whether you join Take Action, the Gender and Sexuality Alliance, Environmental Club, or other student groups dedicated to change, you have the opportunity to make a difference within the high school or beyond.

When the massacre in Sudan occurred, and the government blocked the populace from social media, I saw many of my Instagram followers change their profile pictures to a soft blue to demonstrate their solidarity with the victims in Sudan.

While I followed this trend, I kept up on the news of Sudan and donated some of my own money through the International Rescue Committee, a non-governmental organization that engages in humanitarian endeavors across the globe.

Not everyone may be able to donate to the causes they are passionate about, but there are other ways to promote your cause: Keep up discussions to educate people about why your causes should matter to them, follow current events and be an educated citizen and voter.

You don’t need to run for Congress or donate your savings, but make sure that the candidates you vote for align with your passions, and that they are not part of a trend, but a movement.
We need to keep our spirits up. Those 10 seconds a day you use to spread awareness through a text or a tweet can be more. Turn that passion into a commitment — that is how we create change.

When you take a stand, stay standing.