Use Their Words Against Them 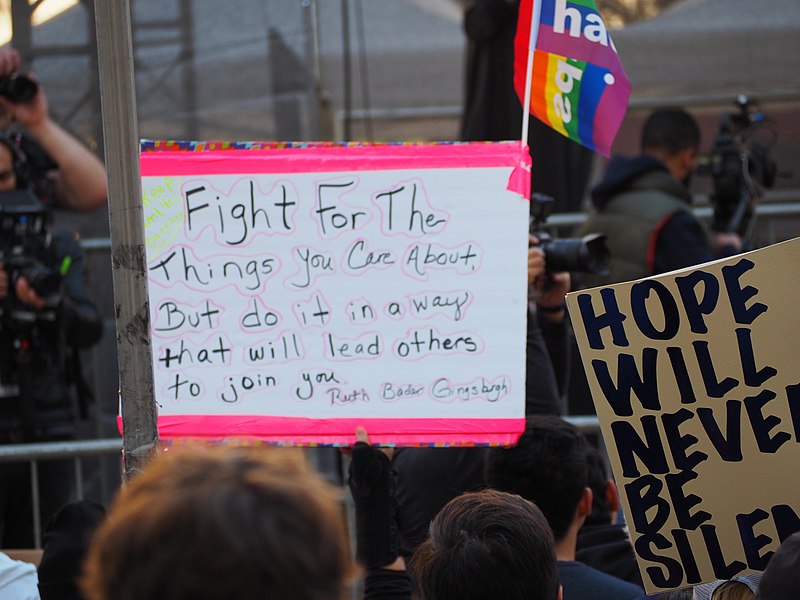 Did she die in peace?

Justice Ruth Bader Ginsburg died Friday night, and many Americans are mourning the loss of an icon. It felt like one of those few, breathtaking times when the world moves as one. There is no radical opinion to write here today. Sometimes, it is comforting to find that you are not alone in your grief and your fear.

However, the reason we cherish RBG so much is also the reason why we are terrified that she is gone. She fought for us, and by us, I mean every single American. She upheld the rights of women by helping them to serve in the military, maintain their rights to an abortion, and achieve income equality. She fought for affirmative action, voting rights and gay marriage. She proved her worth by making sure the word equal applied to every American.

Now that she is gone, some want to tear down the legacy she left us.

We have been terrified for the last four years — and will continue to be for the upcoming 46 days — but I am even more shaken by this great loss. RBG was our protector. We believed that if she stayed with us through Trump’s term, we would survive because of her strength, grace and power. But now, we must persist without her.

Soon, the Republican-majority Senate will vote to install Trump’s nominee in Ginsburg’s seat. Democrats are using the rejection of Merrick Garland as a precedent for this replacement. In the last year of Obama’s second term, a seat on the Supreme Court opened up. He nominated Garland, whom Senate Republicans blocked. Sen. Lindsey Graham (S.C.) insisted that this was not a biased decision. “If Ted Cruz or Donald Trump get to be president,” he said in the Senate hearing, “they’d all ask us not to confirm or take up a selection by President Obama. So if a vacancy occurs in their last year of their first term, guess what: you will use their words against them. I want you to use my words against me.”

How beautiful. How eloquent. How full of lies.

On Saturday, Graham tweeted that he would support Trump “in any effort to move forward regarding the recent vacancy created by the passing of Justice Ginsburg.”

RBG spent the last few years watching Trump and the GOP tear down her legacy. They put Justice Brett Kavanaugh on the Supreme Court while silencing his accuser, Christine Blasey Ford. The man sitting in the White House has been accused of sexual assault 26 times. And now, Trump’s pick for the Supreme Court seat will threaten women’s right to choose.

Ginsburg left the world unsure if her efforts to ensure equality would be upheld. It is our duty to make sure that RBG’s life-long battle for justice is honored. How can we do that? Vote for Joe Biden. Phone bank, become a poll worker, donate, support journalism, call Rob Portman to make sure he votes in honor of RBG — and the promises they made in 2016.

Do anything and everything you can, because the most incalculable loss is that of hope.

We will continue to be haunted when we wonder; did she die in peace? Did John Lewis? Did all the heroes whose names we may not know, the men and women who fought for justice? But if we win on Nov. 3, we win for them and for their legacies.

Don’t despair; vote him out.