Turn The Lights Back on

As sports teams continue to play through the pandemic, theaters remain dark 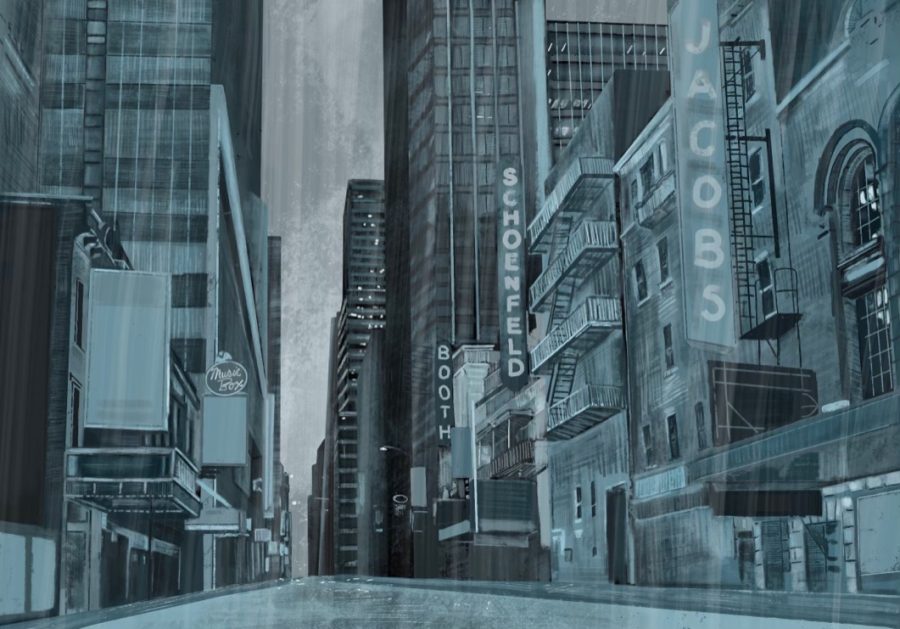 A year after the first case of COVID-19 was reported in the United States, excited theatergoers are nowhere to be seen on the streets of New York City’s Theatre District. Ten months after New York’s governor banned gatherings of more than 500 people, 41 Broadway theaters sit empty, with their marquees dark.

On Mar. 12, 2020, Gov. Andrew Cuomo and the Broadway League announced that gatherings of 500 people or more were prohibited until April 12, 2020 as a precaution due to COVID-19. A New York theater must contain at least 500 seats to reach Broadway status, meaning that all Broadway performances would be suspended.

Along with the suspension of Broadway productions, the pandemic has also darkened high school stages. The Shaker Theater Arts Department abandoned hope of performing their spring musical, “Rent,” March 19-21 after the district announced the cancellation of “all school-sponsored, after-school, large-group events and daytime school assemblies.”

“Rent” cast member Elizabeth Hillman, now a sophomore, said that it did not feel real when the production’s cancellation was announced. “It didn’t really sink in until later, and when it finally did, it was just so disappointing because everyone in that cast had worked so hard and put so much time into the show,” she said.

Almost all professional theaters remain empty almost a year later, and Broadway theaters will remain closed through at least May 30.

Stages remain dark after nearly a year, but Shaker’s illuminated athletic facilities were evident after only five months. Before the district decided how the school year would start, fall sports were allowed to resume, but the Shaker Theater Arts Department is nowhere to be seen in any plans.

The Ohio High School Athletic Association canceled spring and winter sports last year, but allowed districts to choose whether to offer fall and winter sports this year. With teams split up to form smaller groups for non-contact practices, all SHHS fall sports teams were allowed their fall seasons. The school did not enact any measures to bring back theater and a fall production was unable to occur.

Most winter sports teams are in the midst of their winter seasons right now, but there are no signs of a live theater production happening anytime soon at the high school.

The district continues to allow sports despite diagnosed COVID cases and quarantines among  the men’s and women’s basketball teams and the hockey team. Yet, the district does not allow theater productions. Given this disparity, it seems the district values sports and student athletes more than it values theater and theater students.

Senior Isaiah Finley, who is a part of Shaker Theater Arts, is appreciative for the support given from administration, but believes that it needs to grow. “I believe it is time for people in positions of power to start standing up and saying loudly, and I emphasize loudly because there is a lot of quiet appreciation for the arts, but saying loudly, that artists are athletes, too,” he said.

Although school and professional theaters are unable to have audiences for live performances, creative solutions have been used to allow for performances of some kind. The cast of “Jagged Little Pill,” a Broadway musical, came together for a live concert in New York City that was live streamed to fans all over the world on Dec. 13.

On Dec. 10, NBC aired “One Night Only: The Best of Broadway” which featured performances from Broadway shows and other celebrities. The live special raised over $3 million dollars for Broadway Cares/Equity Fights AIDS, one of the nation’s leading fundraising organizations for HIV/AIDS relief.

These events may have shown performances to thousands of people around the world, but it is just not the same thing as going to a theater to see that performance happen live.

Shaker Theater Arts put on two virtual productions this winter, one of “Almost, Maine” and one of “She Kills Monsters: Virtual Realms.” Both shows were outstanding, however the feeling you get when you are seeing a performance happen live in front of your eyes was not there.

Due to the tier system in England, London did not have the same restrictions as the United States. This allowed for a brief reopening of multiple shows. London’s West End production of “Six,” a musical that’s opening night of their Broadway production was set to be on the night that Broadway was shut down, reopened on Dec. 5. The show was then shut down after nine days on Dec. 14 after only 13 shows due to rising cases in the London area.

Even though “Six’s” run was extremely limited, it brought back the feeling of seeing a live show. That feeling is crucial to people’s lives, and it also provided an income for all people involved in the production.

Hillman, who was in the cast of “Almost, Maine,” was elated to have the chance to perform again for the first time in about 9 months. “It was really different than being in an in person play,  but it felt really good to be performing and to be part of a cast again,” said Hillman.

Although Wasserman said that it was more challenging to put together a virtual play than a regular, in-person play, she said the biggest thing she missed was the family that is the Shaker Theater Arts department. “Theater companies, especially Shaker theater, truly become a family. I miss seeing the tight-knit group of our department together each day and hearing students joke, laugh and work toward a common goal,” she said.

Finley also misses the aspect of the friendships that he has made through theater. “The biggest thing is the community and family aspect. It didn’t matter where I was in that building, I always felt connected to that space,” he said.

Virtual performances are great and it is better than having no theater at all, but it is quite simply not the same. When you walk into a theater to attend a play or musical, you get this feeling of excitement that is hard to find anywhere else. You can feel the buzz on the audience as everyone is waiting for the curtain to come up and the performance to start. It makes it more special when you know that what you are about to see will never happen again.

If sports can still happen in Shaker, theater should also be able to. Theater is medicine to people, and that medicine has been taken away. It makes sense for theaters to be closed if it is not safe, but why are sports any more safe? Social distancing and other safety precautions can be put in place to greatly reduce the risk of transmission of COVID-19 and allow for the theaters to open. For example, the London theaters that were open for a limited time made sure everyone wore masks and spaced out seating to ensure social distancing occurs. A one-way system was implemented throughout the building and all surfaces were disinfected thoroughly after shows.

Finley believes actors should be considered athletes too. “We put in the same work, the same hours, the same blood, the same sweat, the same tears and the same full body and soul exertion for our craft,” said Finley, “I appreciate everything anyone in admin has done to support the arts because it is a lot of support, don’t get me wrong, but until it is completely equal between sports and the arts, we have to stand up and speak out.”

Shaker Theater Arts is hoping that they are able to have a regular year for the 2021-22 school year, said Wasserman. “We’re starting to plan for a full season,” she said.

Although Finley will not have a spring musical his senior year, he is excited to see what the younger students in Shaker Theater Arts will put together in the following years. “We all know that all of the talented juniors, sophomores and freshmen of the department will be back on that stage next year, hopefully, giving all the musical theater razzle-dazzle they can give,” he said.

Volleyball, a fall sport, is played indoors. Players get very close to each other and they did not wear masks during games. Both teams get super close, so the players are exposed to a separate group of unmasked people from a different community, which would be a nonexistent factor in a theater.

During a live production, actors on stage would be able to be spaced out and masks can be added to costumes. All of the people involved would be from Shaker, so there is no risk about coming in contact with people from other communities. The large auditorium is currently spaced out to make sure people are as close to six feet apart as possible and no one is directly next to, in front, or behind another person. This could allow for an audience to attend a live production of a play at the High School.

With some adjustments, live theater is possible and should be allowed. Theater is extremely important to some students and provides a family for those who might not have one otherwise. “Theater provides a shared experience and specifically for many high school students, it’s the place they feel safest and happiest,” Wasserman said.

Finley is excited to be able to get back on a stage when it is safe, and encourages everyone to help reduce the spread of COVID-19 so theaters can open soon. Said Finley, “Wear a mask. Socially distance. Spread love.”