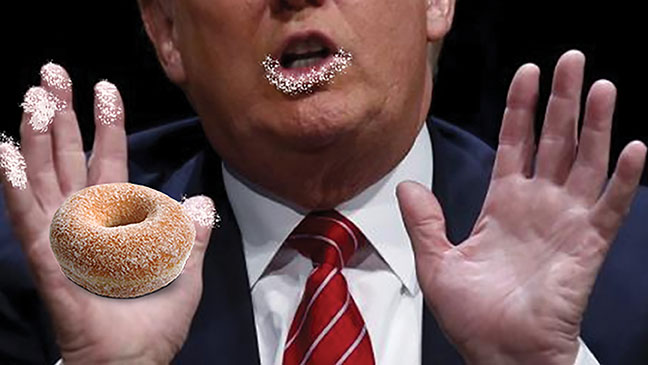 “I have great respect for the Classical Institute of Astronauts — no one has more respect for them than me — but it was the Valentine’s Day party and Mrs. Teacher brought doughnuts, and I just had to be there, people. I had no other choice. There was absolutely no way out of it,” Mr. Trump said at his official press conference the next day.

“He got a B minus on his spelling quiz, and I promised that if he got a passing grade on it, I’d bring him a doughnut,” said Nancy Pence, mother of Vice President Mike Pence and aforementioned ‘Mrs. Teacher.’ “Honestly, I didn’t think he would actually do it.”

Pence volunteered to tutor Trump after widespread rumors gained traction during and after the election regarding his supposed illiteracy. She meets with him on Monday, Wednesday and Friday afternoons, after Trump’s snack time, but before his TV time. “The progress is slow, as to be expected for a 70-year-old man, but he did pass his cursive lettering and multiplication units recently and got two solid gold stars!”

Kellyanne Conway, official counselor to the president during office hours and guidance counselor during school hours, reportedly sent a replacement to the press conference in his stead. Numerous photos show a baked Cheeto, wearing an overly-long tie and haphazardly-attached toupee, sitting in Mr. Trump’s golden throne.

“See, and if you look at the photos, like, really look at them, you’ll see that President Trump was there the whole time–just like he has been for this country and its people since dinosaurs roamed the earth,” said Conway, before Trump admitted that a box of fried dough held him captive during the meeting.

The men around the table were not so easily fooled. “I knew something was up when the Cheeto didn’t speak,” said Michael Pompeo, director of the CIA. “Not even when someone remarked that Hillary Clinton won the popular vote.”

Caught with his hand in the doughnut box, Trump begrudgingly sacrificed his recess time Tuesday afternoon to hold a press conference explaining his actions. “Look, it’s been real rough for me these past few weeks, especially in math, because the distributive property is bad,” he said. “Just terrible. I’m going to talk to DeVos about banning it tomorrow, I promise you. But I’m here now, and I’m ready to work with you, the CIA, the other government staff, and you, the heterosexual white male American people! Just not today. I’m learning the doggy-paddle in P.E. today. But tomorrow, after nap time, I will make America Great Again!”