An Exclusive Look Into Trump’s Mancave 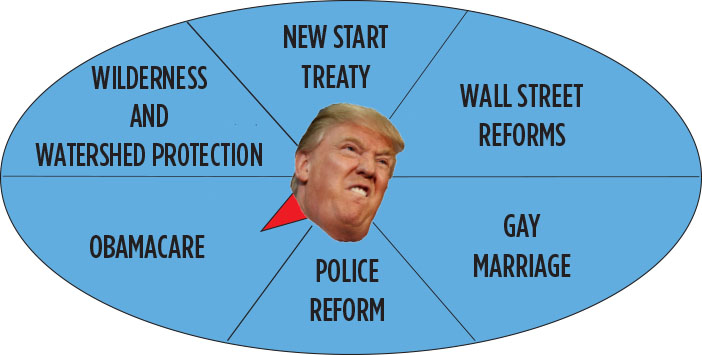 What will President Trump go after next? Spin the wheel to find out!

“Look at the tunnels, I mean, just beautiful, right?” Trump asked as he led us through dimly lit corridor after corridor. “Some very good hombres did a bueno job building this bunker for me. Tremendous!”

He then led us to a giant golden vault door with an eye scanner mounted 10 feet above the ground. House Speaker Paul Ryan hoisted Trump onto his shoulders so the president could reach the scanner, and the door swung open.

First to catch our eyes was a giant carnival wheel fastened to the solid gold wall across from the door. “My Choosey Wheel,” Trump told us proudly. “I spin it to decide what failing Obama policy I want to destroy.” Trump turned to grin in Vice President Mike Pence’s direction. “Fingers crossed for gay marriage next!”

“I’ve personally never been here before,” said Kellyanne Conway, counselor to the president. “I once tried to brief Trump about healthcare reform before a press conference, but the ‘no girls allowed’ rule is strictly enforced. President Trump takes the law very seriously.”

Trump showed us a Russian roulette table in the corner. Each of the table’s sections depicted a different American minority. “I throw the ball and whatever it lands on is the group of people I insult for the day!” He frowned. “This one isn’t so fun. It always lands on black people or women or whatever. Rigged. Sad!”

When asked about the vintage telephone booth in the corner, Trump happily explained, “I got that one as a gift from Russia. I can’t sleep without my nightly bedtime story, and nobody tells those like Vlad…alania. Melania. Great, great woman. Nobody loves that woman like I do!”

Trump keeps a colorful U.S. map hanging on the wall as a symbol of his love for his wife. “She’s… here,” he told us, pointing to New York, “and I’m here,” he said, pointing in the general direction of Washington, D.C. “It looks so close on the map! Makes me feel closer to her and Barron. Plus, it helps me learn the state capitals.”

President Trump has had a busy April. At his Mar-a-lago resort, which he calls his “vacation bunker,” Trump met with Chinese President Xi Jinping. The same day, without congressional approval, Trump launched 59 missiles at Syria in retaliation for President Bashar al-Assad’s gas attack on Syrian civilians. When the subject was brought up during his Donnie Den tour, Trump was caught off guard.

“I was not expecting to be asked about that, but yes, I do remember that day. I had the best chocolate cake I have ever had. Actually, there’s some in the mini fridge. Cake, anybody?”
When Trump isn’t in Mar-a-lago, he’s 20 feet underground, plotting his next steps.

“This is where the true magic happens, people. Tweets, decision-making, arts-and-crafts… I even have the DVR set to record Celebrity Apprentice. What else does a president need?”
His joke earned an uneasy ripple of laughter throughout his audience, which quieted as his smile disappeared.

“No, really. I have absolutely no idea what I’m doing.”