The Shots We Don’t Cheer For

I attended the Cavalier's victory parade and witnessed a shooting 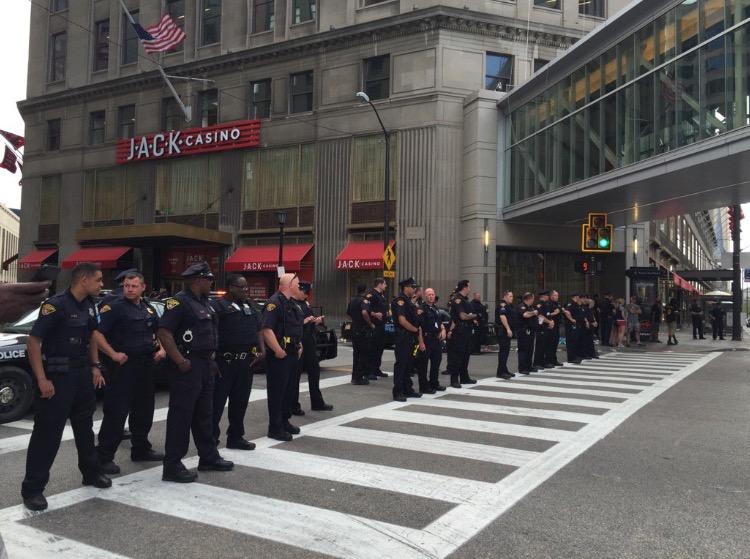 Police form a blockade outside Jack's Casino where the shooting happened.

Two gunshots rang out. Everything was still for a second. My friends and I froze, wondering if we really heard what we thought we had. I felt my heart drop into my stomach as if I was plummeting down the summit of a roller coaster, but there was no joy or excitement. Only raw terror.

Hard to believe just hours earlier the streets of downtown Cleveland were filled with hundreds of thousands of people happily chanting, “Go Cavs!”

The Cavaliers had won Game 7 of the NBA Finals against the Golden State Warriors, making them the first professional Cleveland sports team to win a national championship in 52 years. Naturally, we had to celebrate.

The championship parade was attended by an estimated 1.5 million people including me. There are only 390,113 people in the city of Cleveland.

As I walked through the overcrowded streets, complete strangers excitedly high-fived me. Chanting in unison, we celebrated something Cleveland had been waiting for for so long. It was a beautiful day, not too hot or too cold. There were blue skies and everyone was just so happy.

Then, for the 24,884th time this year, the true beauty of the second amendment ruined it. And I got a front row seat.

The tragic part was, it wasn’t even a surprise.

Watching floats pass down East 9th street surrounded by hundreds-of-thousands of people, I couldn’t help but think, “Wow, this seems like the perfect place for a shooting.”

This is a horrible thing to think, but how could someone not, living in the place where shootings happen daily. I knew there was nothing we could do to stop it. If someone wanted to, they could kill me and a million other Clevelanders.

I wasn’t the only one thinking it; I talked with countless friends who expressed concerns for their safety.

This is the America we live in. People were fearful during what should have been the best day in Cleveland history, simply because they were surrounded by others.

There wasn’t a terrorist attack that day. There wasn’t a mass shooting. But that didn’t protect a thirteen-year-old girl from being shot in the leg.

After the parade, my friends and I walked towards Terminal Tower to catch the train home. Turning the corner from Ontario to Euclid, we suddenly heard two gunshots come from just ahead of us. Had we not stopped for a moment to check out a restaurant on our way there, we could’ve been within the line of fire

When the shots sounded, we froze. Time seemed to stand on end as we stood there with blank minds trying to think about what to do next. Then the screaming started. The momentary pause ended as we watched a mob of panicked people run at us, away from the horror they’d just witnessed. It was like something out of a movie. Like tourists fleeing from dinosaurs in Jurassic World. Or citizens escaping falling buildings in Superman. We turned around and joined the crowd in a run for our lives.

We sprinted through a parking garage and around a corner. Police cars and emergency vehicles raced past us in the opposite direction, sirens blaring and lights flashing.

Finding refuge in a bar, two of us ran to the bathroom, seeking quiet to call our parents.

As I opened the door to leave after informing our parents of the situation, a man shouted at us to stay. He quickly explained that a big group of people had just sprinted past the bar and they were afraid the shooter might still be on the loose. We slammed the door shut again and listened to what was going on outside, our hearts pounding in our ears. All we could hear was faint screaming.

Since it was a false alarm, we got the O.K. to come out. Everyone then immediately turned their attention to the multiple TV’s live broadcasting the situation that was happening just around the corner. We needed to know what was going on.

While there’s many conflicting stories about what happened that day, several facts are known to be true: a 13-year-old girl had been shot in the leg, one person had been arrested immediately and another had run into Terminal Tower to escape without success.

We were safe. But how safe can someone really be in a country where anyone around you could be holding a gun at any time? Especially those who don’t fully understand the harm they can cause.

Many say that having the right to bear arms will protect them from danger. But if I had had a gun that day, I wouldn’t have stuck around to shoot the assailant; I’d run away, just as fast as I did without one.

In America, it is simply too easy for people to purchase guns. There are very sparse background checks and barely any rules put in place to make sure they don’t end up in the wrong hands.

The Orlando shooter was on a terrorist watch list. He also legally bought and owned a gun. Why is that even possible? If I thought someone had even the smallest capacity to kill another, I would do everything I could to keep them from buying anything that could help

Even though an estimated 90 percent of all Americans support some form of gun control, all three legislative bills with that goal were halted before a vote. The majority caucus of the House of Representatives, currently the Republicans, has that right.

In response, members of the minority caucus, democrats, led by Representative John Lewis, held a sit-in on the floor of the House, refusing to allow any votes to be taken before a vote on gun control.

But the sit-in was unsuccessful and no vote was held.

People argue that banning guns won’t do anything because criminals will still find a way to get them, but look at other countries.

Since 1996, in Australia, gun deaths have dramatically decreased by over 50 percent. The only change was the ban on all semi-automatic weapons.

That’s just one example of a country out of hundreds that have had the same results.

So, tell me again how banning guns won’t work?

How many people have to die before something finally changes?

There had been another shooting on East 4th street earlier that day. I didn’t find out about it until someone casually mentioned it to me later that night. Casual. That’s what shootings have become here.