‘Rite Idea: Take a Stand — and the Consequences

Anger at Reed for following safety policy is misplaced. 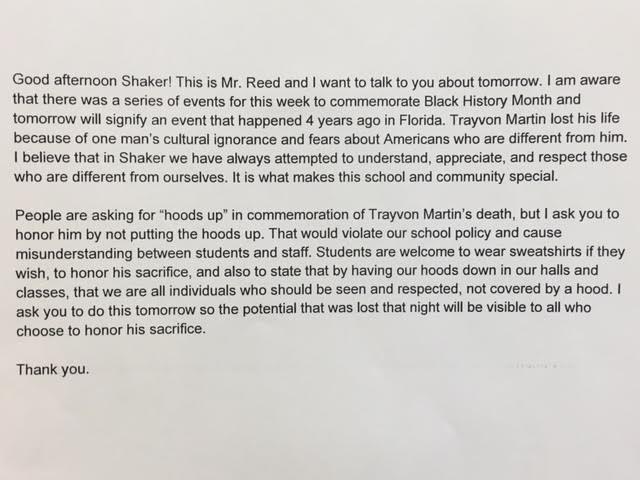 In an announcement made Thursday, Feb. 25, Principal Reed called for students to honor Trayvon Martin by "not putting the hoods up."

The Hoods Up controversy brought from students undeniable anger and frustration, but Principal James Reed is not the one to blame.

The spirit week leading up to Sankofa performances was not pre-approved by Reed and he did not get wind of the event until he saw the posters around the school.

Reed, student Sankofa leaders and Keaf Holliday, Sankofa’s adviser, agreed to permit hoods up during a 10-second moment of silence during the Sankofa assembly Friday. However, many students still felt this was not enough and chose to practice civil disobedience by wearing their hoods up at school that day. Reed’s announcement, in which he requested students observe a Hoods Down rather than Hoods Up approach to honoring Martin, came after concerns that not all students would see the Sankofa assembly and thus have a chance to take part in the hoods-up moment of silence.

He made the executive decision to put safety first, and we cannot penalize him for doing his job.

Although students lashed out about his choice of the word “sacrifice” in the announcement made Feb. 25, Reed clarified that he used the word because he considers all death a sacrifice, not just the killing of 17-year-old Trayvon Martin. While not all students agree with his diction, and may have chosen to use a different word in the situation, it is wrong and hypocritical to degrade Reed’s beliefs while asking him to accept your own.

Although it may seem unfair for Reed to impose his beliefs on students, the backlash was similarly unjustified.  The simple answer to Reed’s Hoods Down declaration concerns the safety of this school. Just five months ago, the school endured a violent threat that shook the solidarity of all students. Students are not recognizable from the back with their hoods up. While wearing school identification cards along with a hood was proposed, the half measure would have made almost no difference if security tried to identify a student via video footage.

Students who continued to wear hoods even after being asked to remove them knew their disobedience would precipitate consequences. Students were only sent to in-school suspension after they were asked to remove their hoods and they refused — which made the situation a matter of insubordination rather than speech. Reed said students whom he asked to remove hoods complied, and there was no need to take further action.

We are not here to criticize students who partook in the effort to punctuate Black History Month with a tribute to Martin. This was a personal decision, and we commend students who stuck to their beliefs. However, there are consequences to civil disobedience, and if you choose to ignore the rules, you must be willing to accept the consequences — without complaint.