Students Feel Pressured to Think about College Years in Advance 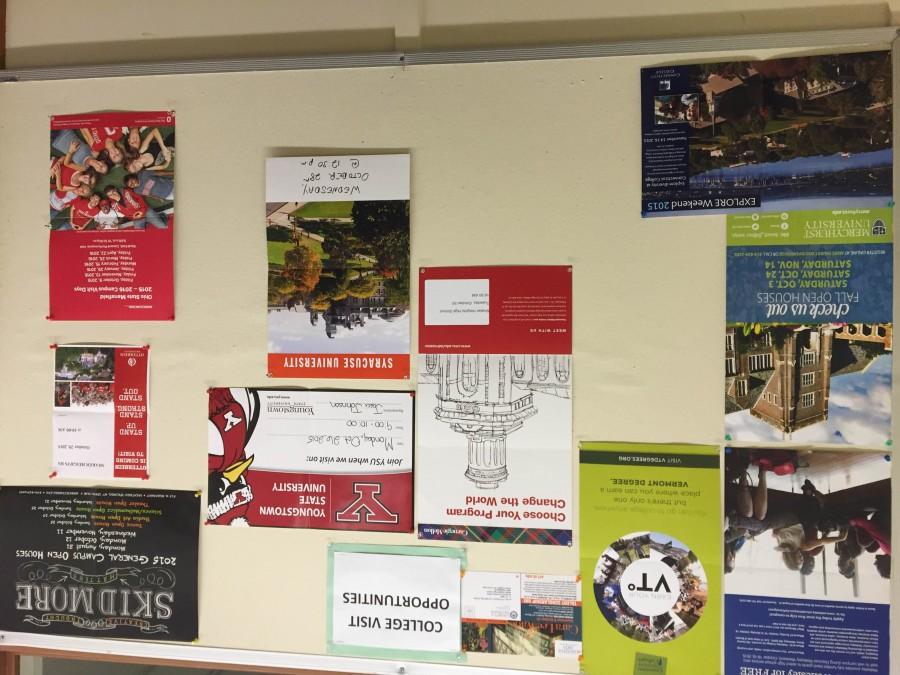 A board located in the main office outlines upcoming colleges visiting the school on Oct. 9

On my first day as a freshman, my fears ranged from getting lost to accidentally colliding with a senior twice my size. The thought of college seemed distant to me, and therefore didn’t cross my mind, until about two weeks later when I became aware of the recurring theme in the high school.

Within the first month of school, at least 10 adults interrogated me about my post-graduation plans. My first meeting with my guidance counselor ended in an extensive conversation regarding college acceptance rates, and I couldn’t help but dread hearing the repetitive morning announcements reminding juniors and seniors about upcoming college visits or SAT prep.
Students set high goals for themselves as early as freshman year, and both teachers and parents alike constantly pressure their children to achieve these goals and begin preparing for the college process years in advance.

And the pressure to begin thinking about college doesn’t just start in ninth grade. The idea is beginning to spread to students as young as six or seven. In February,  The New York Times reported that schools across the country are taking elementary-level students to tour college campuses. A first grade teacher from North Carolina even has her students fill out practice college applications.

For some students, such as those from low-income families or those with parents who did not attend college, early preparation like this may be the determining factor in whether or not the child chooses to attend college.

However, the pressure becomes too much at some point for all students. Marcy Guddemi, executive director of the Gesell Institute of Child Development explains the negative effects of constantly badgering children about their futures. We are robbing children of childhood by talking about college and career so early in life. Kids being pressured to think college, to pick a college, that everything you do is for college, you miss the here and now,” said Guddemi.

Regardless, the push to go to college is circling among students as young as six or seven, and students in elementary and middle schools across the country are taking field trips to local campuses to explore their options.

Parents are expected to play an active role in their child’s college preparation, and collegeboard.org directs parents on the proper  college preparation steps during their child’s  ninth grade year.
The list includes a section titled, “Summer Before High School, ” which instructs parents and their incoming ninth-grade student to “Visit a college campus together. It’s a great way to get your child excited about college.”

Another section in the Parent Action Plan instructs parents to “Help your child start a college list.”

The University of Iowa also includes a detailed page on their website explaining the importance of ninth grade in the college application process and outlining college planning tips for high school freshmen.

Freshman Will Shinabeck believes such activities may place too much pressure on freshmen to make commitments about college.“I think you should start thinking about it , but I don’t think you have to start making your decisions that early,” he said. Shinabeck believes sophomore or junior year is an appropriate time to begin touring campuses and making school lists.

It’s true that some student-athletes, such as sophomore Lori Mack, can also benefit from earlier efforts to identify colleges. “You have to start looking a little earlier than most people so you have like a good idea of where you wanna go and so you can talk to coaches,” Mack said.

However, few students will ever play sports in college. The rest of us–students of all ages, it seems– face the awkward college conversations from adults and peers alike. Parents often push their beliefs on their children years prior to the college application process, pressuring children to earn high grades in hopes of being accepted to dream schools.

Junior Amelia Gingras endures such questions about the future. Gingras said, “Lot’s of people, like, wanna know if you have an idea of where you wanna go, of course, so it’s nice to have just, like, a default answer.”