The Shaker Bubble Has Burst 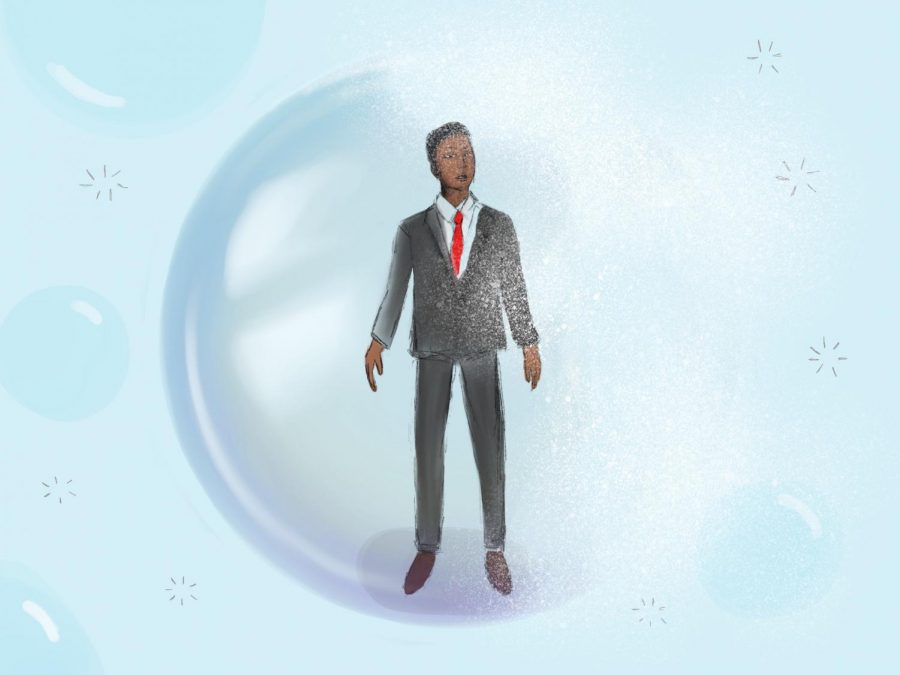 The “Shaker Bubble” is the idea that Shaker students are sheltered by the community’s liberalism. This assumes the Shaker experience is one unconditionally untainted by bigotry, and it can discredit a student’s opinion on discrimination within the bubble. I first learned about the “Shaker Bubble” during classroom visits from SGORR in sixth grade, and I sometimes use the term now as a SGORR leader. While it’s true that Shaker students grow up with a profoundly liberal experience in our schools, this term is painfully inaccurate, and no event exposed this fact better than last Thursday’s community meeting.

As of that meeting, I can no longer refer to the “Shaker Bubble,” because it has officially burst.

Anyone who attended the meeting will concur, and for those who missed out, here’s what happened. This community meeting was supposed to be the administration’s response to the recent turmoil regarding the four SHHS employees who have either resigned, been fired or placed on administrative leave since Oct. 10. Teachers, students, residents and parents packed the large auditorium expecting answers, but instead left angrier than they came — and they came angry.

Protest began as soon as the format of the meeting was introduced. The moderator, Executive Director of Communications Scott Stephens, said attendees were to write their questions on index cards, and to pass them to the aisles, where they’d be picked up and brought to the podium. Before Stephens could even finish describing the process, a parent marched to the edge of the stage, and screamed, “Our questions will not be censored!” The proctor brushed her aside, but her concerns foreshadowed the administration’s troubles to come.

Throughout the meeting Dr. David Glasner, substitute principal,  Dr. Stephen Wilkins, interim superintendent, and Stephens refused to disclose further information about the situations regarding SHHS employees – and wouldn’t even refer to Jody Podl or Jonathan Kuehnle by name until late in the meeting. One man was escorted out due to his passionate yelling. Then, as if the night wasn’t complicated enough, the meeting turned to race.

This shift occurred when senior Brianna Jarrell marched onto the stage and inquired about the locking of the egress after school, which she described as discrimination against black students. She said that the administration believes “black students are always up to something.” The administration was unable to sufficiently answer her questions, which only fanned the red hot flames of anger. The meeting then turned to parents arguing over the intent of the meeting, incoherent shouting from attendees, and, ultimately, chaos. This chaos was a gift to the administrators because it wasted time during the one-hour meeting – which we left angry, embarrassed and hurt by the administration’s handling of crisis.

The meeting can be described in a wide range of ways. Some will call it “ugly” or “embarrassing,” while others will revel in the chaos it caused, but I think it was undeniably necessary. This meeting brought to light the dark side of diversity because it showed that different people face different issues. While many white parents of our community may be infuriated by the persecution of Ms. Podl, many black parents of our community are upset about discrimination against their children, and both groups’ outrage — along with any other group in between — is valid. While it’s true that race wasn’t the intended subject of the meeting – and I don’t personally share discriminatory experiences – it’s beyond immature to invalidate those feelings. One may disagree with the method used to bring them up, but you cannot reasonably say that those students didn’t have the right to voice their concerns. Shaker is a community where not everyone is solely invested in one issue at a time, because the Shaker experience is too multifaceted for a “one size fits all” approach to problem solving. Each experience is distinct and important.

Ultimately, I don’t know how the administration should solve these problems, as they’re extremely complex. What I do know is that despite the chaos, I’ve never been more proud of Shaker. The administration assumed that they could just sweep this conflict under the rug with empty answers to loaded questions, but we proved them wrong. We’re not a community that can be stepped on, and in this crisis, it’s obvious that the administration doesn’t have the answers. The undeniable truth is that the problems we’re facing have existed long before Thursday’s meeting, and if we don’t do anything to fix them, they’ll exist long after. So now is a time where we must make a choice: We can disregard this meeting as an embarrassment, or we can use it as a chance to open dialogue to heal our community. Either way, the “Shaker Bubble” no longer exists. I’m sure that we’ll make the right decision, but only time will tell if our community can find answers through solidarity.

Fryer is a member of CORE, the leadership of the Student Group on Race Relations. He is also a drama leader and head script writer for Sankofa. He is a senior at the high school. Guest ‘Rites and Letters to the Editor can be sent to [email protected] and the current editor-in-chief, who can be reached at [email protected] The Shakerite reserves the right to reject any Guest ‘Rites or Letters to the Editor.