‘Rite Idea: Trump Degrades The Press, and You Should Care

Lies -- not journalists -- are the enemy of the people 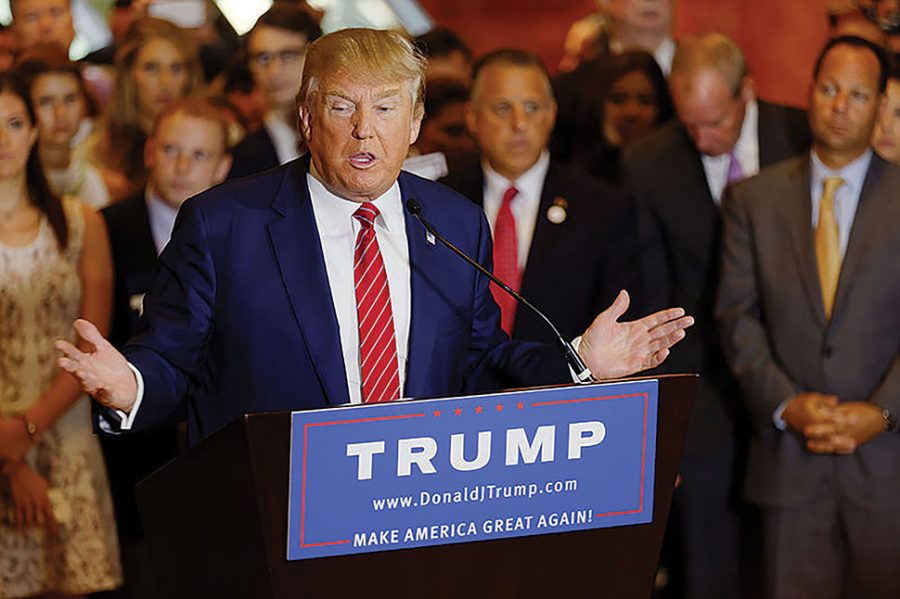 President Donald Trump speaks in Trump Tower at the beginning of his presidential campaign. In his first month of his presidency, Trump has described mainstream media outlets such as the New York Times as “fake news.”

The media should be embarrassed and humiliated and keep its mouth shut and just listen for a while.”

This isn’t a quote from “Saturday Night Live.” It’s from Steve Bannon, the top adviser to the chief representative of American democracy, speaking to The New York Times.

While the fact that such a powerful political operative said such a thing isn’t obscene enough, the rest of President Donald Trump’s team continues to undermine the media and spew lies.

Kellyanne Conway, counselor to President Trump, justified his controversial and currently tabled travel ban by citing the terrorists and “masterminds behind the Bowling Green massacre” — an event that never happened.

The president would not be outdone, however. “Any negative polls are fake news, just like the CNN, ABC, NBC polls in the election,” he tweeted Feb. 6.

These statements are not just untrue; their intention is despicable.

The leader of the largest, most powerful democracy on Earth and his executive team are peddling blatant lies in order to cover up disgusting policies.

Trump’s political team is not the first to try to cower the media. Ari Fleischer, who was White House press secretary to President George W. Bush, once said after the events of September 11, 2001, “Americans . . . need to watch what they say.” However disturbing, this comment, coming just days the gruesome terror attacks, pales in comparison to Trump’s outrageous assault on the press and citizen dissent.

The media is not the “opposition party,” as Bannon and Trump have claimed. The media checks the actions of our leaders. It is the essential piece that makes modern democracies work. By crippling and impairing this institution, Trump risks the destruction of our political system.

“The media is a check and balance of the government. When the media is destroyed, you don’t have this other point of view,” said Amanda Ersek, who teaches Global Studies and AP/IB World History. “The media and the government shouldn’t get along. That’s a critical viewpoint for the public.”

Invalidating the media is the first step toward totalitarian regimes.

“I think the media plays an extremely important role as a watchdog,” government teacher Brian Berger said. “When you take away that role, the government seizes more power.”
The freedom of United States citizens depends on the information we receive from our leaders.

However, many times leaders purposely omit or manipulate crucial information to keep power. That is why the political media acts as watchdogs — to discover the truth, put it into context and offer informed opinions about the government’s actions.

What pundits, candidates, officeholders, and citizens alike often fail to recognize is that destroying the media is an excellent political strategy. However, that strategy succeeds at the expense of our democracy.

Political dialogue cannot thrive without the press. It is true that fake news is prevalent – in a poll of 3,000 U.S. adults, 75 percent thought fake news headlines were accurate.

Even students and young adults, who are decidedly more internet savvy, struggle to detect fake news. In a Stanford University study in which the results were described as “dismaying,” high school students couldn’t tell a real and fake news source apart on Facebook.

Even in a separate study of students who attend Stanford, the most selective university in the United States, the students couldn’t identify a difference between a mainstream and fringe news source.

Critical thinking has never been more vital — or in short supply. We must learn to identify lies.We cannot stop the Trump administration from flooding our minds and headlines with fake information, but we can learn how to discern facts from falsities through critical thinking.

In order to do this, click and read rather than reacting to an inflammatory headline; ensure the story includes facts attributed to reliable sources. Note the source of a story; if it’s not a known news organization, treat it like a Wikipedia entry and keep searching until you can find the story’s original source. If a comment comes from the president or his staff, visit a reliable outlet such as Politifact for a fact check.

And, above all, don’t share any story, video or image unless your English teacher would accept it as a source in a research paper.

By actually reading or watching the news and truly thinking of the implications and biases present, we will defeat “Trumpism,” or using lies to justify outrageous policies.
“I’m a true believer of the media,” Berger said. I think you have to check the reliability and the credibility, but with mainstream media, I trust them.”

Trump’s team wants to discredit the media so that only they can give false information and get away with corruption if not dissolution of democracy. If Trump convinces the public that the mainstream press is all fake, he can cover up any relationship his campaign staff had with Russia during the election by claiming that this is false as well, for example.

By discrediting the institution, they are doing the next best thing to exiling or murdering intellectuals and journalists, like Russian President Vladimir Putin and other authoritarian leaders.
Censoring the press is an obvious way to destroy it, but discrediting it is a sneakier, smarter way.

The media should not only contribute to the conversation, but mediate it.

As members of the student media, The Shakerite seeks to provide useful and interesting information to students.

We are taught as we assume our roles in The Shakerite newsroom about the dangers of libel and fake information. In the end, falsity — not the government — should be the enemy of journalism.
Mr. Bannon, we, as The Shakerite, respectfully decline your offer. We will not keep our mouths, minds and eyes shut. We, the future generation, will keep our minds moving, our eyes watching, our ears listening. We won’t stop. And we encourage others to do the same.