‘Rite Idea: He Is Not The Alumnus We Inducted 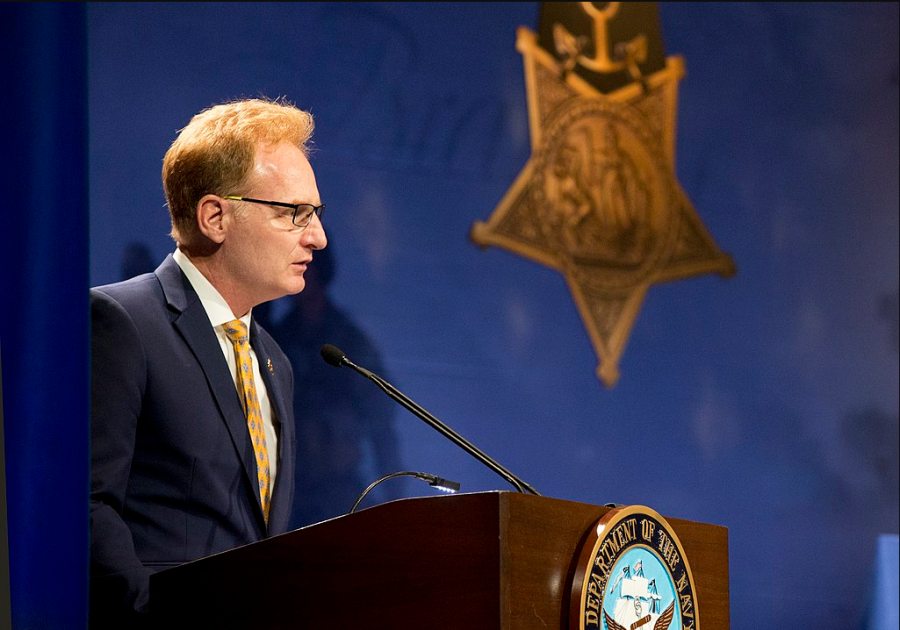 Thomas Modly delivers remarks during a Medal of Honor recipient’s induction into the Hall of Heroes during a ceremony at the Pentagon Auditorium on May 30, 2018

“Nothing is more precious than choosing openness to other people. You can do this by demonstrating repeatedly the willingness to show love to strangers, even when you’re not even sure that person needs it.”

During his HOF speech, Modly encouraged Shaker students to open their hearts to strangers. He emphasized that showing good will toward others will open doors for people.

Unfortunately, Modly did not seem to take his own advice yesterday when speaking to sailors aboard the U.S.S. Theodore Roosevelt. Modly relieved the ship’s captain, Brett Crozier, of his post April 2, after Crozier wrote a letter pleading for help as the COVID-19 pandemic reached the aircraft carrier. The letter leaked and was published in the San Francisco Chronicle March 31. Modly told the crew Crozier was “too naive or too stupid to be a commanding officer.” Some sailors jeered Modly for that comment, and the crew gathered to cheer Crozier as he departed the ship. As of Tuesday morning, there are 230 confirmed cases of COVID-19 on the aircraft carrier with 4,800 crew members.

In the letter, Crozier wrote, “We are not at war. Sailors do not need to die,” and asked to remove all but essential crew members so sailors could be isolated and tested.

In his remarks to the crew, Modly accused Crozier of committing “betrayal” and creating a “big controversy.”

One requirement for hall of fame nomination is being a positive role model for current Shaker students. Do we want our students to insult their peers behind their backs? Do we want students to punish people who call for help? After this recent spiral of events, is Modly truly someone students should emulate?

Modly initially defended his statements, saying “I stand by every word I said.” However hours later Modly apologized after being persuaded to do so by Defense Secretary Mark Esper.

Shaker has always been an accepting and friendly community and school district, so why are we honoring a man whose first instinct is to disrespect others who are trying to save lives, especially during this pandemic?

We are not the only ones questioning whether Modly is the best fit for an honored position. High ranking government officials and veterans also called for his removal on April 6. Congresswoman Elaine Luria, a Virginia Democrat and U.S. Navy veteran, released a statement saying Modly’s “remarks to the crew show that he is in no way fit to lead our Navy through this trying time.”

Our community cannot look past this event.

There are currently no policies for removing someone from the HOF, according to Executive Director of the Shaker Schools Foundation Holly Coughlin, and to her knowledge, this honor has never been withdrawn.

Modly was appointed to the U.S. Naval Academy after graduating from SHHS in 1979. He served as an officer in the U.S. Navy and was an active duty helicopter pilot. He earned a Harvard University business degree and ultimately became the acting secretary of the U.S. Navy. Those notable accomplishments merited induction into the HOF.

But this instance of disrespect contradicts our community’s values. We cannot ignore his actions. If Modly does not resign his HOF induction, the Shaker Schools Foundation should rescind it.