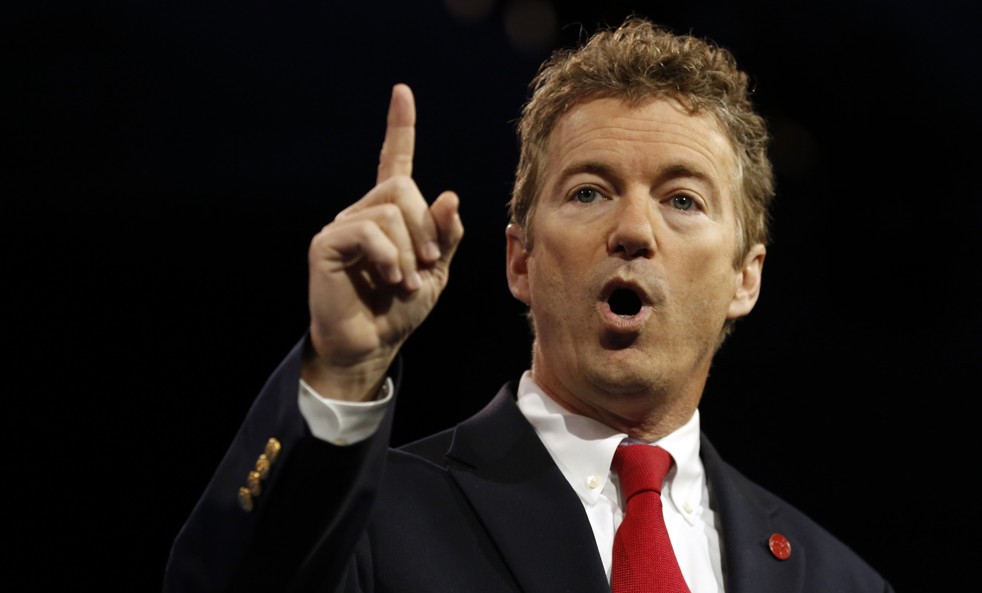 Ah, Thanksgiving. What better way to celebrate than a column about stealing?

I always liked Ron Paul. While perhaps the most homophobic, anti-big government person I’d ever seen, I had a real respect for the way he answered questions; he answered off the top of his wise bald head, not with a lame stump speech. With his little arms and big dreams, it’s a shame he never got on the ticket for the GOP.

His son, Sen. Rand Paul (R-KY), is already running for president, aiming for the 2016 nomination his father could never realize. He’s been on Fox News after Obama’s Syria speech, held a 13-hour filibuster against the drone program and, most recently, shared Ted Cruz’s spotlight during October’s government shutdown.

Lately, though, Paul hasn’t been the symbol of young, hip conservatism he fancies himself. He’s being called a plagiarist, accused of stealing from Wikipedia and the Heritage Foundation.

Side note: The problem isn’t that Sen. Paul stole from Wikipedia. Just as there is a War on Women in this country, there is a War on Wikipedia in Shaker. Currently we have a sort-of Don’t Ask, Don’t Tell policy with Wikipedia. Teachers and librarians may speak out against it, but the students will never admit to it. And often, teachers won’t directly ask about it either.

This isn’t uniquely a Shaker thing, though. The high school is just training kids for college, when sourcing expectations will be higher. Funny, though, how the expectations fall if you’re a senator.

But, friends, it doesn’t have to be this way! I’d direct teachers, librarians and administrators to this Nature study that found the Encyclopedia Britannica only marginally more accurate than Wikipedia.

Shaker’s aversion to Wikipedia is antiquated. Sure, Wiki-abstinence is the only sure-fire way to avoid Rand Paul-esque plagiarism, but most students aren’t doing that. Most students are sourcing unsafely, not realizing the risks to them and their project partners.

We must recognize that this is happening. Instead of discouraging Wikipedia completely, the school should teach kids to practice safe sourcing. Teachers and librarians should demonstrate ways for students to avoid unwanted plagiarism. Students should talk openly and frankly with their project partners, stressing the need for safe, consensual Wikipedia use.

Using Wikipedia is an important part of every young person’s life. I urge the school to realize that and teach kids accordingly.

But anyway, back to Rand Paul.

The problem isn’t where he stole from, but the fact that he did it. Either his judgement is so terrible, his staff is so mismanaged or his ego is so large that he thinks he’s above the law. I’m leaning toward the second, and a bit toward the third.

Regardless of the reason, if Paul can’t cite his sources at a 10th-grade level, it scares me that he wants to be president. If he can’t use Wikipedia responsibly, how can he be competent enough to negotiate treaties and write budgets? If he can’t manage his staff, how can we trust him to be the commander-in-chief of the world’s largest army?

Even if the plagiarism scandal has been overblown — and perhaps it has a bit — he knows what he did was wrong. A middle schooler would know what Paul did was wrong. Someone get this guy a NoodleBib account.

During the 1988 Democratic primaries, then Delaware Sen. Joe Biden was accused of plagiarizing a British Labor Party leader’s speech on multiple occasions. Biden eventually withdrew from the race.

Unlike Biden, this is not the end of Paul’s presidential run. Americans are very, very forgetful. When the primaries begin in more than two years, few will remember Plagiarism-gate, and even fewer will care.

However, for the first time in this 2016 “campaign,” if we can call it that this early, Paul has lost credibility. He looks dishonest and disorganized. Among Republican contenders, his once strong momentum has shifted to New Jersey Gov. Chris Christie.

But we have a long way to go. There are still more than 1,050 days until Election Day 2016 and at least another 750 until the Iowa caucuses. So can we stop talking about 2016 already?

Then again, nothing says Thanksgiving like shouting about politics.