Racial Slurs, Still Brought to You By the NFL 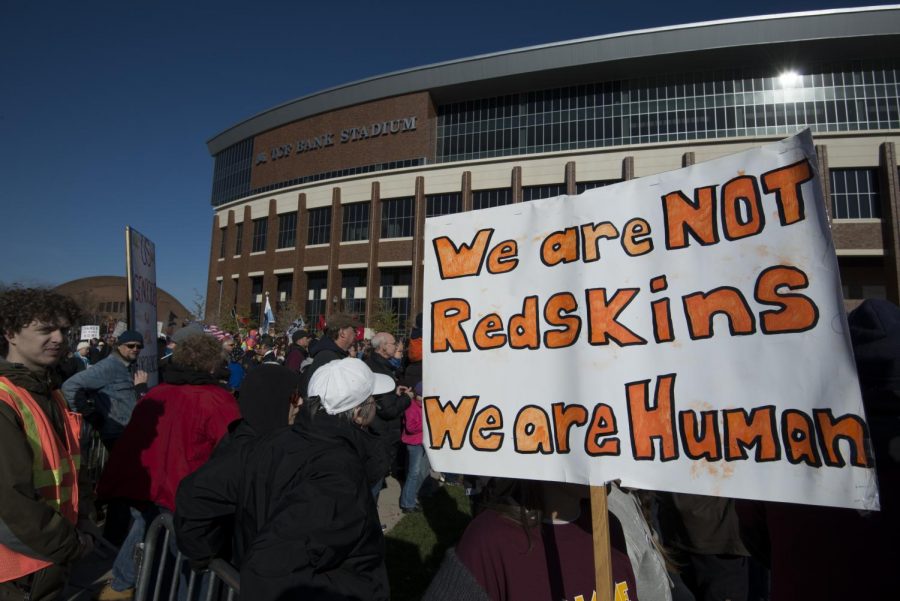 Protesters marched through Minneapolis to TCF Stadium, where the Minnesota Vikings were playing the Washington Redskins Nov. 2, 2014. The protesters called for the Washington team to abandon the name "redskins" and the image of a Native American as their mascot.

The Washington Redskins franchise, owned by Daniel Snyder, is worth a whopping $3.1 billion and has employed the Redskins mascot since 1933, when the franchise was in Boston. In 2018 the franchise raked in $493 million. All of this money finances a team that is inconsiderately named with a racial slur.

This isn’t 1492, when Columbus sailed the ocean blue and his crew rounded up and systematically enslaved the “redskins.” And no, this isn’t 1830, when Andrew Jackson passed the Indian Removal Act to solve the “Indian problem,” which led to the Trail of Tears and more than 5,000 Cherokee deaths. The term should never have been acceptable then, and it sure as hell shouldn’t be acceptable now. It is 2020, Daniel Snyder; the Cleveland Indians have changed, the Miami Redhawks have changed, and it is time for the Washington Redskins to change, too.

The word “redskin” has been used since the Europeans stumbled upon this continent and encountered Native Americans. It goes back to the days when trading companies and some states offered bounties for the assassinations of Indian people. The bounty hunters were to provide the bloody “redskins” as proof of the “Indian kill.” A Washington Post piece about the mascot pointed to an 1863 announcement published in Minnesota’s Winona Daily Republican that used the term as a pejorative: “The State reward for dead Indians has been increased to $200 for every red-skin sent to Purgatory. This sum is more than the dead bodies of all the Indians east of the Red River are worth.”

A similar meaning of the word emerged in 1755, when King George II endorsed the Phips Proclamation, which said, “His Majesty’s subjects to Embrace all opportunities of pursuing, captivating, killing and Destroying all and every of the aforesaid Indians.” According to an Esquire Magazine story, the British government paid 50 pounds for adult male scalps; 25 for adult female scalps; and 20 for scalps of boys and girls under age 12. These bloody scalps were known as “redskins.”

These disgusting examples of the word deployed over time illustrate why “Redskins” should not be a name of a billion-dollar franchise cheered on by millions of people.

While the slur’s meaning hasn’t changed much throughout time, it has recently become a more offensive word to use. The Washington Redskins and Snyder have come under fire from people around the United States who want him to change the name of the team. If Native Americans comprised as large a population as African Americans, and they lived among us, rather than in isolation, we would see that redskins is a very offensive word. But because we banished them to reservations, we don’t have to. Former Redskins cornerback Champ Bailey told USA Today that the name was degrading and said it was “almost like the N-word for a black person.”

In 2016, the MLB World Series between the Cleveland Indians and Chicago Cubs was viewed by an average of 23.4 million people per game.

The Cleveland Indians have also been pressured to abandon a racially insensitive mascot, Chief Wahoo, and the team eventually discontinued the goofy red caricature. Since 1970, more than 4,000 schools have dropped Native American mascots and changed the names of their sports teams. In 1972 Miami University made the “Redskins” its athletic mascot after a Miami Tribe of Oklahoma member made an unexpected visit to campus. Later, in 1996, the Miami tribe sent a resolution to the university that stated, “The Miami Tribe of Oklahoma can no longer support the use of the nickname Redskins and suggest that the Board of Trustees discontinue the use of Redskins and other Indian related names.”

Miami University immediately changed its team name from the “Redskins” to the “Redhawks.” Both the Cleveland Indians and Miami University listened to Native American tribes and changed their mascots, while Daniel Snyder continues to stubbornly defend “Redskins” as the team name of his multi-billion dollar franchise. It’s racially insensitive and wrong, and there is nothing any American not named Daniel Snyder can do about it.

While the Redskins finished 3-13 this season, the Kansas City Chiefs are in the Super Bowl for the first time in 50 years, which will bring the tomahawk chop — popular among Chiefs fans — to the 100 million people watching. The 54th Super Bowl will take place tomorrow night, as Kansas City confronts the San Francisco 49ers. While “Chiefs” is certainly a more racially sensitive name than “Redskins,” it is hard to understand why we still have sports teams named after people we disenfranchised, discriminated against, enslaved and killed on their land.

The media has flooded the streets of Miami with questions such as “How are the Chiefs going to slow down the 49ers zone running game?” and “How is the 49ers defense going to stop the Chiefs multitude of offensive weapons?” But I think another question we should be asking is why do fans insist upon doing the tomahawk chop and chant despite how insulting they are to Native Americans?

Vincent Schilling, associate editor of Indian Country Today, finds those actions incredibly offensive. “It is an absolutely horrible stereotype of what a native person is,” Schilling told ESPN. “It’s not much more than a cartoon. My people are not a cartoon. My community is not a cartoon. My heritage is not a cartoon.” Kaysa Williams, 28, a Native American Democratic campaign worker in Oklahoma, said the chanting and chopping “dehumanizes who we are and what we stand for.” Williams told ESPN, “There’s not really another race in the United States that has to defend whether or not they can be used as a mascot.”

So, tomorrow night, when you see Patrick Mahomes scramble around the pocket and throw that unbelievable touchdown — and the tomahawk chant rains down from Chiefs fans — take a second to think before you start chanting with them.