It’s been a year since the mass shooting at Marjory Stoneman Douglas high school; so what’s changed? 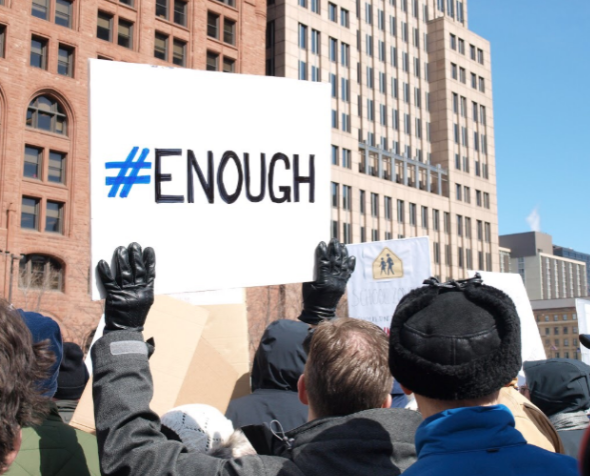 One year ago yesterday, our country was rocked by a tragedy that awoke and inspired a generation.

On Feb. 14, 2018, a gunman murdered 15 students and two teachers in just over six minutes when he entered Marjory Stoneman Douglas High School in Parkland, FL, a small suburb just northwest of Fort Lauderdale.

The incident ignited a flame within Generation Z, and its members started a movement.

Some survivors organized a nationwide school walkout one month after the shooting. These survivors also founded the organized the March for Our Lives, and have committed their lives to fighting for stricter gun legislation in America.

However, like other things, the gun reform movement wanned. Though it created a movement thought unimaginable, we eventually let ourselves fall back into a deadly cycle now seen as normal. But not all hope is lost.

In 2014, before the founding of the March for Our Lives, only 26 percent of young people voted in the midterm election according to Nonprofit Vote. However, in 2018, this number jumped to 31 percent, according to the Teen Vogue.

According to the Pew Charitable Trust, nearly 50 new gun reform acts have been passed in 32 states, including Ohio, who increased domestic violence restrictions on firearms. Bump stocks, which can be attached to semi-automatic rifles to make them even more deadly, have been banned nationwide.

We still have a long way to go. Every day, gun violence is ravishing inner cities, most of the time with little to no news coverage. According to the New York Times, 58 people are killed by guns every 28 days in Chicago and every 187 days in Cleveland. Organizations such as the National Rifle Association are acting as enablers as they buy our politicians and let our children die.

The work of students from Parkland and across the country has inspired a new generation of change. This generation is our future, and the only hope I have for this country.

But what about those in charge now? This issue can’t be pushed back for 20, 10 or even one year while we wait for Marco Rubio or Rob Portman to implement common-sense legislation. After all, nearly 40,000 lives could have been saved in 2018 if they had done so.

So who’s at fault? It shouldn’t even be a question. It’s not the teacher who pushed the gunman to get better grades, and it’s not the students’ fault for not noticing the red flags, which might not be immediately evident. The fact is, if those with power had used it to protect those who voted for them in the first place, maybe 40,000 Americans would still be alive today.

First, we must take responsibility ourselves. We can march. We can scream. We can yell as much as we want, but nothing will change unless we take action. Though 31 percent is better than 21 percent, the amount of young people not voting is too high. Education is crucial, because uninformed voting is just as dangerous as not voting.

For those of us who can’t vote, we must take action in every way possible. Again, marching is not enough; it’s great, but it’s not enough. We can’t let them forget about us.

Beyond marching and calling, what can we do? How can we improve our voter turnout to finally scare the politicians who think their position is secure?

It all starts with talking. We have to talk to each other, inspire each other. We have a powerful tool at our fingertips with unprecedented access to social media and communication. It makes it easy to spread ideas and inspiration, but it also makes it easy to spread falsehoods and lies. Recognizing this is imperative to ensuring this movement not only survives, but prospers.

Other than that, there’s not much else us young people can do, right? But that’s false. We can get involved in organizations that help adults register to vote, as well as helping to transport people to the polls on election day. We have to hold adults accountable, but we must also understand that the system is not always designed to allow everyone to vote.

This understanding can lead us to think about the future. Polling stations in Ohio were open for one day between 6:30 a.m. and 7:30 p.m. For people working more than one job, raising children, going to school or any other obligation, this can be impossible. Voting by mail is a step in the right direction, but it’s not enough. It needs to change, and those who hold current office will not do it.

It’s time for us to start thinking about the future. The only way for us to truly secure the change we need is to run for office. We no longer have to wait 20 years. A new precedent was set in 2018: You don’t have to be 40 to run for office; you just have to be passionate. From local levels of the government to Congress, running for office sooner rather than later is key.

We need real policy and change from those who have the power to enact it. And those of us who don’t have the direct power must vote. People who can vote must to protect those who can’t.

But our action can’t stop there. This movement was created by those of us who can’t vote, and we are going to be the ones to continue it. But our momentum must proceed. As the pain moves farther away from Feb. 14, we must remember the agony we were in that day.

As Barack Obama said when he spoke in Cleveland on Sept. 13, “The biggest threat to our democracy is indifference.” As we move on and heal, we must remember this: We can’t forget, we can’t stop caring and we are more powerful than we think.