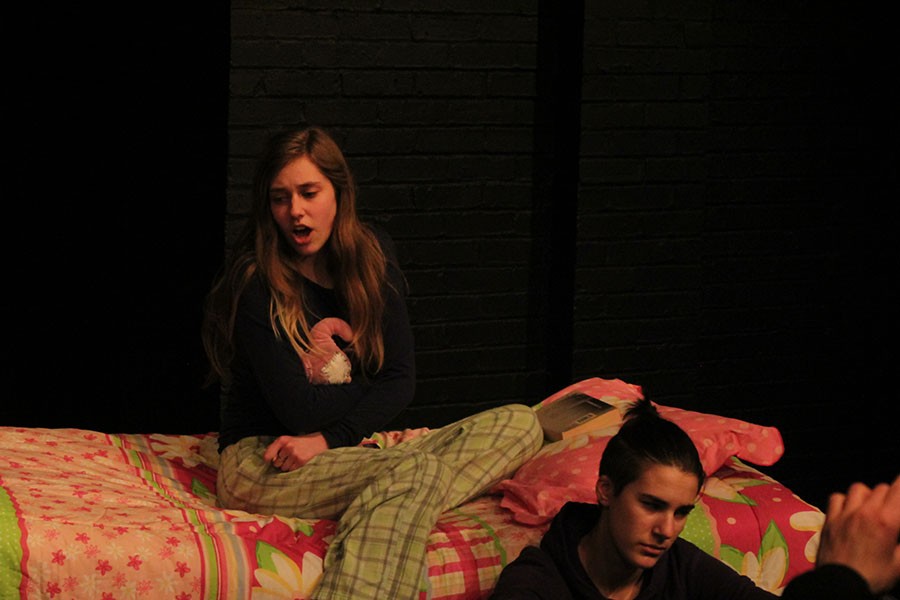 Rachel Elson and Rachel Krause, both seniors, perform in Ruth Geye's "The Elephant."

As the cast members of New Stages 33 bowed, to say I was absolutely amazed would be an understatement. When I laughed at sophomore Gus Mahoney’s hilarious rendition of the IB god in “Divine Intervention,” and almost cried as sophomore Isabel Wang performed her death as Kay in “Okay,” I was absolutely startled by the amazing work students can do in two weeks.

Not only was New Stages 33 a series of amazing performances, it was also able to tell both lighthearted, eye-catching comedies and wrenching tales of sorrow, addressing social issues and describing the untold stories of society.

Playwriting director Christine McBurney opened the show, introducing the writers and directors of the spectacular plays.

New Stages is held in “Stage 3,” the black box theatre under the Large Auditorium. Then-senior Amy Silverman converted a fallout shelter there into Stage 3 in 1981.

“Snowstorm,” written by senior Amia Peeler and directed by senior Simon Brown, started the show. Morgen (junior Madison Thornton), the driven, goal-achieving woman whose goals are endangered by a snowstorm, held the stage at the beginning. The play features Morgen and the frustrated Kyle (junior Max Laskley), who barges into her house because of the storm.

“Snowstorm” examined the themes of approaching things with a positive view, and ‘if you do a good deed a good deed will happen to you.’ These themes were emphasized through the positive events when the two characters were friendly, and negative when they argued.

This play was slightly comedic, and did not emphasize issues such as suicide or love as much as other plays did. However, it was beautifully staged, and Peeler’s writing was simple and well-rounded. Both Laskley and Thornton played their parts well, and the tension between them impressed the audience. While not as emotionally striking as some plays that would follow, “Snowstorm” started the show on a lighter note.

Next, “The Elephant,” written by Ruth Geye and directed by Davionne Gooden, was quite the opposite, showing the often terrible treatment of bisexual people. The lights opened on a well-crafted bedroom set, where Jacki (senior Rachel Krause) lay in bed, reading. Lauren (senior Rachel Elson) entered through the simulated window unexpectedly. Jacki and Lauren argued about Jacki’s relationship with Adam (senior Tal Shutkin), and the validity of Adam and Jacki’s feelings for each other, because of the latter’s feelings for Lauren. After stepping on Jacki’s stuffed elephant, Lauren and Jacki fought loudly but ended the argument with a kiss. Adam stepped in, shocked, and so ended the play.

“The Elephant” addressed current societal issues and left the audience thinking. Krause showed true presence on stage with her volume, while Elson fit her character with an interesting, quieter demeanor, making the situation more lifelike. Geye’s well-developed characters were both real and intriguing, slowly leading to the theme of bisexual mistreatment, and Gooden made it come to life. The play wasn’t perfect, as there were a few technical mistakes in terms of odd volume and blocking, but it brought the audience into Lauren and Jacki’s world.

A comedy followed, eliciting laughter from the audience. “Divine Intervention” by senior Greth Lyon and directed by senior Klara Hricik, played on the tensions between Advanced Placement and International Baccalaureate students at Shaker. IB student Zach (senior Sam Carballo) and AP student Emily (senior Phoebe Potiker) discussed the pros and cons of their respective programs, and the IB god (sophomore Gus Mahoney) and AP god (junior Elena Dumm) argued about IB and AP comedically. Meanwhile, Emily and Zach grew more interested in each other, and ended up kissing as the gods hilariously argued, using the audience’s bodies to explain their argument. When the gods found out that the two students were kissing, they screamed so loudly that the students could magically see them, and the gods admitted they were the people behind the AP and IB curricula, amazing Emily and Zach.

Not only did the play earn many laughs and much applause, it made me think about the validity of the AP and IB systems, and it used evidence from Shaker students enrolled in these two programs. The actors’ body language and the piece’s staging accented the comedy. All actors were impressive, but both gods, Mahoney and Dumm, stood out for their comedic skill.

After intermission, senior Julianna White’s comedy “Members Only,” directed by junior Kelsey Jones, began. In a cozy living room, a book club met. The sassy Betsy (senior Lauren Reed) led the club with Mary-Anne (freshman Isabella Carroll) and Florence (junior Maggie Cullina). Betsy’s husband Jim (junior Jason Ramsay) was the “perfect” guy, both muscular and educated, exhibiting great insight about the book, which, it seemed, no one but Betsy and her husband had read. As tensions rose, the fashionably late Patti (sophomore Jessa Kaups) ran in and announced that Betsy’s husband Jim had been having an affair with the flirty girls, Mary-Anne and Florence.

A devastated Betsy kicked out Jim, with Florence and Mary-Anne behind him. Patti comforted Betsy as she finally stated, “I didn’t read the book either, just Sparknotes,” and the play ended.

Despite addressing themes such as adultery and the harm that gossip can bring, the play was a true, lighthearted comedy and provided welcome levity amid the evening’s harder themes, such as suicide or different learning styles. Carroll and Cullina served perfectly as the flirty, desperate girls and Reed performed her fleshed-out character well.

Although “Members Only” explained the real problem of adultery, some of actors’ lines were difficult to hear. Ramsay was the best “Mr. Perfect,” and reacted realistically to the revelation of his affair. White’s unique writing gave the show more life, and Jones demonstrated good knowledge of realistic movement.

The frightening “Okay,” written by Maria White and directed by Katie Wilkinson, offered a more serious theme. It started as Kay (sophomore Isabel Wang) paced and eventually gulped down a large amount of pills as Drew (senior Walker Edwards) walked  in. After a long conversation about loneliness and wondering about the world around them, Kay’s hyperactive yet desperate character became evident. As the conversation progressed, the audience could better understand Kay’s situation and her desperate, naive nature. Kay’s odd obsession with “High School Musical” and nicknames such as calling Drew ‘Draw,’ and calling herself ‘Okay,’ revealed more of her obsessions. Kay sang “Breaking Free” from “High School Musical” as she died from the overdose. Drew shouted, “Someone, save my friend!” over her dead body, ending the play.

“Okay” was a revelation about students who do not want to leave high school, and do not want to move on. Wang played the part perfectly with her voice and body language, acting more desperate as the conversation progressed, and Edwards acted well as the lonely and shy Drew. White’s artful writing and Wilkinson’s accurate staging helped bring the message of loneliness and desperation to the stage. “Okay” was probably the evening’s most intense play, adding more meaning to New Stages 33.

Finishing the the show on a light note, “Dysfunctional” informed the audience about family dynamics. Written by Dayvon Rose and directed by Alyssa Jacobs, “Dysfunctional” depicted a unique family, employing comedy to show its message. The play started in the Robinson’s basement, with the emo Gabby (sophomore Elena Sola); perky and brilliant Sarah (freshman Anna Walker); and their former Broadway actress mom Emma (senior Browning Hayes). David (senior Zach Reizes), the only “normal” one of the family, was bringing over his “study partner,” Julie (sophomore Izzy Illijasic), whom he was  actually dating. He welcomed Julie to his “embarrassing” family and found the door locked. In addition to using humor, many characters in the play used the audience to illustrate their emotions about the other characters.  For example, when Emma tried to find out the true nature of David and Julie’s relationship, she used the audience to her advantage by sitting on their laps, shaking them, and speaking small talk to them.

Finally, Emma discovered that David and Julie were dating, and revealed that she had locked the basement for that reason. David agreed that his family was actually not that embarrassing, and he made up with his sisters and mother. This play illustrated the importance of acceptance within a family. Rose used an eloquent vocabulary to emphasize the awkward dynamics. Jacobs staged the play in an intentionally unorganized way, to show the nature of a true family. Both Walker and Sola hilariously employed their emotions into their characters, like Sola speaking in a monotone, and Walker doing quite the opposite, with a cheery and sassy voice. A break from the evening’s intensity, ”Dysfunctional” offered humor and a look into a non-nuclear family.

I hope to see New Stages 34 next year, and assume by the reactions of my fellow audience members that many of them will come again as well. The most interesting play to me would be “The Elephant.” All of the plays’ casts and directors did excellent work, but this one stood out for its bold, dynamic nature, making one wonder at the history behind the interaction. The writing was very well done, forgoing formality to fit everyday conversation style.

The actors in “The Elephant” supported each other as well, helping the dynamics within the story grow more complex. Krause exemplified distraught emotions with her face and dialogue, and Elson gave the audience the passive and calm personality of Lauren.

By watching New Stages 33, I learned how well students can illustrate issues and use their emotions to portray what they are feeling. The professional writing style these students displayed is outstanding; some of these writers will no doubt excel in venues beyond Shaker. New Stages 33 is a true example of Shaker’s outstanding arts programs.

A previous version of this article referred to Isabel Wang, a sophomore, as a junior. The article has been edited to include Wang’s correct grade.