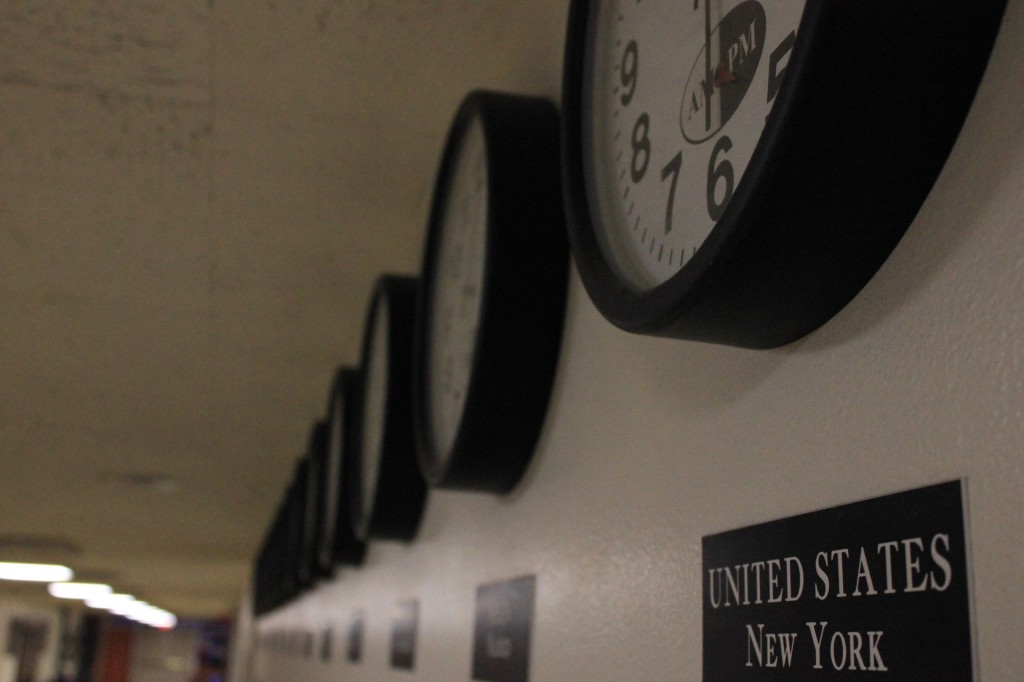 In the middle school's main hallway, 13 clocks supposedly show the times in cities on six different continents. On Feb. 6, seven of the 13 showed the wrong time. Five were off by one hour, two were off by three.

Let me tell you two stories.

Story No. 1: A few weeks ago, I called the middle school hoping to organize a Shakerite visit to eighth-grade English classrooms; we wanted the rising freshmen to know how to join. (Just a little shameless self-promotion.)

A secretary answered the phone. When I asked for the eighth-grade English department chairperson, a long, awkward pause followed. It was a long, long pause for a simple question.

And then she said it.

“We don’t call it English anymore.”

When middle school students received their schedules in the mail in August, included was an inelegantly typeset sheet that displayed only one complete sentence. “Some changes have been made to course names to better reflect the IB philosophy,” it read.

These poor middle schoolers; they’ve memorized Chinese songs, and now they have to learn Newspeak. Can their doublethink at least count for LANGACQS credit?

These changes are motivated by the IB Middle Years Program, which runs from fifth to tenth grade. It is the only phase of IB — Primary Years and Diploma are the other two — for which Shaker has not yet gained IB-approval. (We’ll send our application in October and find out if the IB Gods look favorably upon us in spring 2015.)

At this point, there is no going back: Shaker will be a K-12, bonafide IB district. The last piece we need is MYP approval. To get there, we pander. At the middle school, we’ve changed class names and hung flags, murals, learner profiles and clocks in the halls.

Middle School MYP Coordinator Dexter Lindsey wrote in an email interview that part of his job is to help “integrate the visual elements of IB within the middle school.” He wrote, “The purpose [is] not to make IB approve our MYP program.”

“The purpose is to provide visual cues and reminders to our students and visitors of our beliefs in the core principles of IB,” he wrote. “All aspects of the learning environment are important as they impact and inform students, staff and visitors. The wall spaces in any school or classrooms are perfect locations for supplemental learning materials, messages, and important information.”

Which brings me to story No. 2: In the middle school’s main hallway, there are 13 adjacent clocks purportedly showing the times in 13 world cities on six different continents. When I visited the middle school Feb. 6, though, the times displayed on seven of the 13 clocks were wrong; that is, a majority of the clocks were incorrect. Five were off by one hour; two of them — sorry Jerusalem and Mexico City — were off by three. So they’re props, not clocks.

The district’s desire for MYP approval was no doubt a contributing factor in Superintendent Gregory C. Hutchings’ hiring. At his first public interaction with Shaker faculty and residents, on March 14, 2013, he said he wrote “the only actual dissertation in the country on teacher efficacy in IB MYP in an urban school district.”

To be sure, the middle school needs help. It’s no coincidence that Hutchings’ first major policy change was ending social promotion, the policy that let middle school students progress to the next grade despite failing one or more classes. It was his first — and, surely, not his last — attempt at fixing the middle school.

And it needs fixing. Last August, when Ohio released report cards for public schools, the middle school received three F’s, whereas none of the other seven schools received more than one.

Its reputation precedes it, and some parents pull their kids out after sixth grade; part of Hutchings’ 90-day plan was to meet with “Shaker parents who send their children to private schools to hear their perspectives of the district.”

And, perhaps its most infamous quality, the middle school has a behavior problem. As I touched on last week, the middle school had 18 incidents of “harassment, intimidation and/or bullying leading to a suspension or expulsion” in the first 17 weeks of school. For comparison, Woodbury had five; the high school, three.

When you hear “middle school,” though, you don’t think of the ugly numbers, you think of the memories. I remember when Mr. Sears dressed up as bedsheet Socrates to teach us Greek history and when Ms. Roth used Starbursts to help us understand debtors’ prison. We grew outside the classroom, too; in those two years, I began to understand diversity’s limits as I saw my classmates self-segregate, and I developed my first strong, meaningful friendships.

But as I walk around the middle school, I don’t think about concrete, constructive policy initiatives like Hutchings’ on social promotion. And I don’t reminisce about my time there. I’m struck by the IB-indoctrination that preoccupies this school.

It’s embarrassing that we seem completely at the mercy of some bureaucrats 5,000 miles away, and that we’re so desperate for IB certification that we’ll: change course names, swap social studies class time for Mandarin Chinese songs, demand teachers endure hours of IB training, have sophomores complete a mandatory (but not mandatory) Personal Project, expect teachers to teach both the AP and IB curriculum in the same class and hang flags and clocks and globes and learner profiles around our schools.

I have no problem with the “the core principles of IB.” Really! With or without them, teachers will change students’ lives, inspiring them to “take ownership of their learning” and be “lifelong learners.” But I stress: It’s teachers that do that. Not flags or clocks or learner profiles. Teachers. A strong, well-rounded curriculum can help, but it’s teachers who ultimately create “lifelong learners.”

Maybe MYP approval will help teachers do that. I hope it does.

It would just be nice to retain some integrity getting there.