My Body is Not Your Excuse

Columnist Hannah Kornblut writes about her experience with period stigma 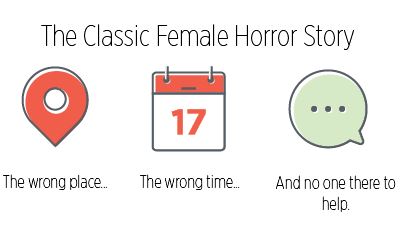 Without a tampon on hand, a period becomes more than an inconvenience.

Imagine waking up one morning, eating breakfast, getting dressed — and then, pausing for a moment. You’re almost always prepared for your period, and with a little mental math you figure you have about a week or so. You decide not to take the time out of your morning schedule to throw some tampons in your backpack.

But there’s that voice in the back of your head saying, “You know, you may want to bring some. Just in case.” But of course, you suppress the subconscious reminder and go to school — and then, in the middle of class, you realize: you messed up.

Everyone with a menstrual cycle knows this struggle.

Of course, most teenage boys don’t take this subject seriously. Giggles, sneers and condescending looks tend to arise if you ask the teacher to leave the class and someone catches you sliding a tampon up your sleeve, because God forbid you hold it in your hand during the walk from your classroom to the restroom for all to see.

Yes, it sucks. Having a period sucks. However, this stigma makes the reality of it 1,000 times worse.

It’s time we end this stigma. I understand that the subject can be uncomfortable for those who don’t menstruate. But, imagine you’re a person who does. Now, imagine that people don’t take it seriously, that they constantly crack jokes — that is the reality of it.

One day, in class, a boy asked to borrow a pencil and immediately reached for my pencil case. I quickly took it back from him, as I appreciate someone asking for my permission before touching my things. Stunned, he looked at me and asked, “What, do you have tampons in there or something? Are you on your period? Gross!”

For the record, I wasn’t on my period, and the boy had no reason to think so, as it was scientifically impossible for him (or anyone) to make this judgement. Why should my justifiable defense of privacy be blamed on my “time of the month”? Yes, menstruation makes me more hormonal than usual, but it does not make my thoughts or feelings any less valid than they would be had I not been stuck in this vicious cycle.

My younger brother, at age 14, once made a joke about me being on my period. I had gotten into a fight with him over something small, as siblings do. However, this time, he accused me of fighting because I may have been menstruating.

I know he’s a young boy, but that does not excuse his lack of understanding and education regarding the health and lives of the women around him. He immediately attributed my mood and actions to my period, rather than accepting his role in affecting them.

Health education is extremely important. It’s more than just learning about safe sex–it’s about learning how to respect other people’s bodies and their natural functions. Periods may sound gross and weird to young minds, especially those of which are male, but they are a fact of life.

On behalf of all those who face this struggle each and every month and those who are tired of trying to tuck their tampons up their sleeves as fast as they can after sneaking them out of their backpacks, this stigma must end.

The male population must no longer ignore their own responsibility to educate themselves on the basic facts of a menstrual cycle, and they must certainly stop blaming a woman’s biology instead of themselves when their words and actions provoke response they don’t like.

A version of this article appears in print on page 11 of Volume 87, Issue 4, published May 5, 2017. Accompanying it was “The Modern Red Scare,” by Investigations Editor Astrid Braun.