‘Rite Idea: Living on the Edge 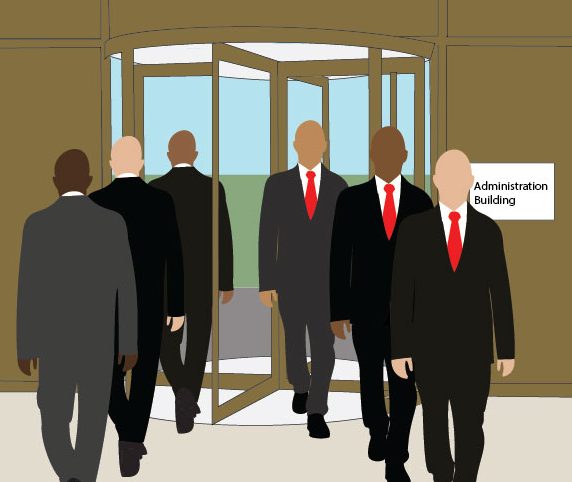 As a class, this year’s seniors have seen a lot — from Twitter feuds and a new standardized test each year to communication blunders and three different principals during our four years at the high school.

While we turned all of these things into rich, abundant journalistic opportunities, outside of the newsroom, our academic lives existed in an unsettling flux.

At the beginning of our first three years, we were forced to adjust to a new principal and new policies.

After becoming to accustomed to former Principal Michael Griffith our freshman year, he announced his resignation on April 13, 2015. The community was devastated to see Griffith’s 15-year tenure come to an end.

Former Student Body President Phoebe Potiker (‘15) told The Shakerite in 2015 that Griffith “has worked so hard to create what the high school is today and what Shaker stands for as a district. For me, he’s the face of SHHS, and I’m so glad he was my principal for all four years.”

For the class of 2018, there has been no face to associate with our years at the high school, but instead a slew of new ones that never seem to stick in our memories.

After Griffith’s resignation, the district hired Interim Principal James Reed III. Despite encouragement from the Shaker Heights Teachers’ Association to extend Reed’s tenure into our junior year, the Board of Education instead hired yet another unfamiliar face: Jonathan Kuehnle. Once again, we began a nine-month adjustment period.

Unlike the others, however, Kuehnle has been present for more than one year of our high school careers. At the end of our junior year, it seemed, finally, like we could catch our breath, adjust and not have to write a farewell story on the latest principal in our final print edition of the year.

Although we won’t be here to endure the change, the Dec. 14, 2017 announcement of Superintendent Dr. Gregory C. Hutchings leaving at the end of this year is only fitting to close the curtain on this four-year-long production.

Through all of this, we have been always on the brink of stability and normality without ever fully making it there.

If what we’ve been told countless times — that what makes an education flourish is the forging of meaningful relationships between students and educators — is true, we can’t help but feel that our own may have been slighted.

If we don’t have ample time do so, we will never create meaningful, trusting relationships with our administrators or educators, which is the case at the moment as administrators come and go and teachers’ class sizes grow ever larger.

For the students who remain after we cross our graduation stage in June, we hope that the district can reconcile these years of uncertainty. We hope that students after us enjoy high school careers unaffected by confusion about who will be in charge next year and what new policies they’ll attempt to enforce.

Shaker owes its students a quality education, and if that means filing through three principals in four years or a superintendent in five to provide it, then so be it. But let this year’s graduating class be the last to know what it feels like.