If Donald Trump Were Female

Would a female Donald Trump get away with saying the same things he does? 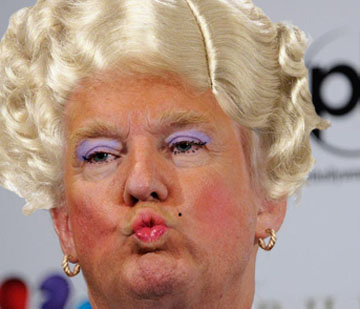 This Photoshopped version of Donald Trump's face accompanies web stories about the gendered double standard that allows him to behave obnoxiously without consequence.

It’s no secret that Donald Trump says some pretty outrageous things. Not only does he say them and get away with it, but he gains more followers and attention for them.

Trump leads the race for the Republican Party presidential nomination, despite his opprobrious comments about women, Muslims and Mexicans. With that in mind, picture this: Donald Trump, the female Republican front runner.

The idea of a strong female figure saying the same distasteful things Trump does seems crazy. People assume that women can’t be strong leaders like men and do the things they do. If a woman running for president said half of the things Trump has, she would face so much scrutiny that she’d have to drop out of the race. A man, however, such as Trump, is praised for saying the United States should build a wall to keep out Mexicans, or we should ban Muslims because they might be terrorists. People say he’s real and unlike other, lying politicians. The New York Times columnist Frank Bruni first explored this idea in his column “If Donald Trump Changed Genders,” in which he critiques the problems with gender roles and sexism in politics today.

History teacher Paul Kelly said that if Trump were female, he wouldn’t be able to get away with most of the things he’s said.  “As much as people claim that we are an advanced society, we’re still quite sexist. Women don’t get paid as much as men do, and women don’t hold the same number of CEO positions as men do,” said Kelly. “A woman, if she did that, would be seen as being rude and obnoxious, whereas a guy can get away with it.”

Freshman Jake Lehner also said that Trump as a woman wouldn’t be able to get away with as much and people would describe her as even more “out of her mind” than Trump, the man, is. “She probably wouldn’t be as popular as Donald Trump. A significant portion of Trump’s supporters are racist and sexist, therefore, being just a woman, she wouldn’t earn their support based on just the views he has,” he said.

Bruni talked about the double standards at work in the presidential election:

“The 2016 quest for the White House has included ample exegeses on gender and plenty of talk about double standards, but most if not all of those have pertained to Hillary Clinton. Is a raised, emphatic voice heard as something more grating when it emanates from a woman? Is toughness perceived as something more pernicious when the hide and stride are female?

But for an even more obvious, indisputable example of unequal treatment, look to Trump. A woman with his personal life, public comportment and potty mouth wouldn’t last a nanosecond in a political campaign — or, for that matter, in a boardroom. Her name on a line of scarves wouldn’t be the selling point that his on a line of ties is.

Freshman Allie Sweeney said if Trump were a woman and said we should build a wall to keep all of the Mexicans out, people would treat her as if she were crazy. “They would think that’s the stupidest thing ever,” said Sweeney, “but if it comes out of a male’s mouth, they would be supportive, like many have been of Trump.”

Kelly also said society frowns upon strong women. “In many cases, they’re embraced. But the reality of it is, I mean, look how they portray Hillary [Clinton]. She has to be very conscientious of how she presents herself, because if she does it too much one way, she’s seen as being too masculine, but if she goes too much the other way, she’s being seen as too feminine.”

He said, “She has to walk a tightrope, and it’s next to impossible to appease people.”