One student’s reflections on the allure of vaping. 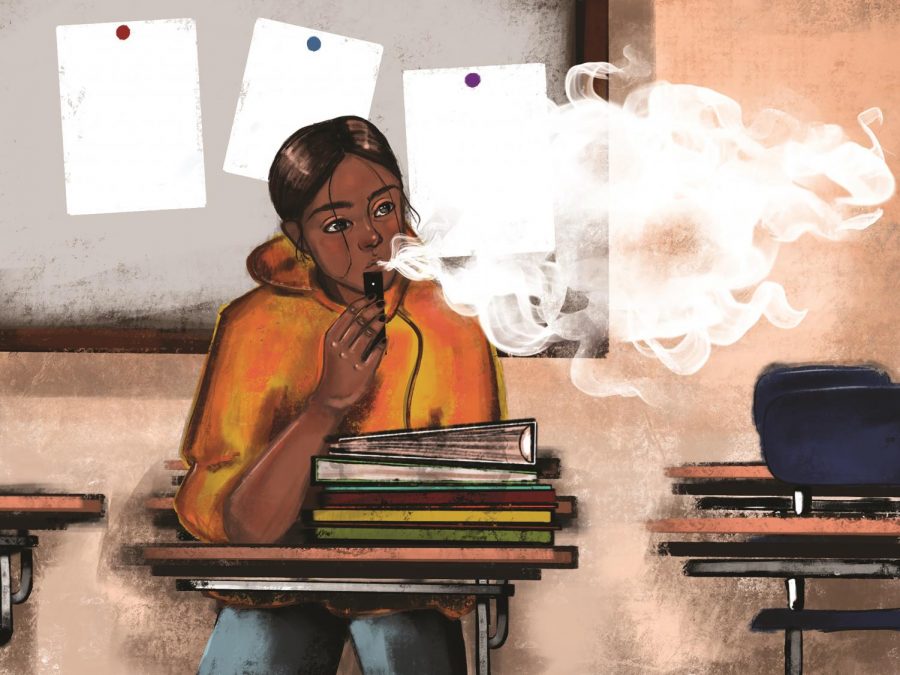 Alone in my room at 10 p.m., without enough energy to do more homework, but too much energy to go to bed, I needed some entertainment. I’m not much of a Netflix guy, and video games aren’t really my thing. So, naturally, I posted a controversial opinion in the “Living in Shaker Heights” Facebook group. That’s always a good time.

It’s an epidemic, no doubt. And it seems like the stories of kids developing rare lung diseases, or even dying, are growing more frequent and closer to home.

I decided to share my view with the Facebook group. I said that vape companies deliberately target kids and prey on them for their own gain. That kids are victims, and parents need to treat them as such. That they need help, not punishment.

All of this expressed with, admittedly, a fair amount of uncalled for hyperbolic language. Subsequently, the comment section became chaotic, a type of parent vs. parent war zone. These four replies best summarize the varied responses:

“Bravo Jordan! Now hopefully you and your like-minded peers will make it uncool to be duped by corporate fat cats sitting in a room devising marketing plans to lure kids into the trap.”

“Typical progressive BS! Don’t blame someone for their actions, blame the marketing department of the company. Nobody is making your child vape, they are choosing to do so. Instead, teach them about personal responsibility.”

“This may have made sense when vaping was new and kids were not aware of the risks involved. But kids should know better by now and not start in the first place. That certainly doesn’t absolve the companies, but the kids who start now shouldn’t be viewed as completely innocent victims.”

“ohhh I get it it’s a kid giving parenting advice.”

What a lot of parents also fail to recognize about the epidemic is how much the mob mentality plays into it. Different from simple peer pressure, kids (like myself) didn’t start vaping just because others were doing it and we wanted to fit in.

Certainly peer pressure contributed, but I can attest to the fact that there was no increased clout level one got for picking up a JUUL that was significant enough to knowingly start risking our lives. It was because the mob mentality convinced us that there we no actual, dangerous health effects.

Sure, my mom could send me as many articles as she wanted about vape-related illnesses, but when I saw high school athletes or academic stand-outs doing it, I became brainwashed to tell myself, “It can’t really be that bad for me if all these successful and seemingly healthy people are doing it.”

All that on top of the fact that every time a news story broke about a kid getting hurt vaping, these seemingly exemplary kids would be the first to say, “Well, the stuff he was using was laced,” or, “That kid was doing it 50x more than we do.”

All this put together hopefully makes it easier for outsiders (aka parents) to understand how the epidemic has spiraled out of control.

The conversation around vaping, however, is unlike most other topics. Why? Because we essentially know nothing about it.

Unlike the resources of a WWI historian, or a marine biologist, there’s not a whole lot of data we can pull from; just some speculatory conclusions derived from only a couple years’ worth of evidence.

Although it seems pretty credible to predict that inhaling FDA-banned substances isn’t great for one’s lungs, the sad truth is that that most points made in the vaping debate must be followed by saying “but we don’t know for sure yet.” And that leaves an unusual amount of room for strictly emotional responses.

What I learned from this Facebook discussion goes way beyond vaping, and I likely wouldn’t have been able to learn it if I was constantly battling with my parents about vaping.

They knew I did it occasionally and were disappointed, but not angry at me. They sent me articles to make sure I understood the risks and they tried to understand why, if I was so smart, I was doing something so seemingly stupid. They genuinely tried to understand.

The space they gave me to decide for myself, and the way I felt so defensive when many people in the Facebook group attacked or belittled me, helped me understand how ineffective it is to discuss controversial issues with polarized, inflammatory and accusatory language.

Discussions turn into arguments when we care more about being right than about being understood.

So parents: Try to listen and hear your kids without judgment. And kids: We should probably listen with an open mind to the people who care most about us.

Only then can the real conversations begin.