Does the “Bubble” Protect?

Shaker is considered a safe place for Jews to live, but it’s complicated 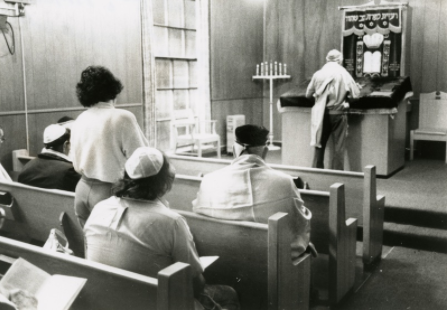 Anti-Semitic attacks routinely remind American Jews of how we are often not safe and not welcome. Protected by the “Shaker Bubble”, acts of anti-Semitism often shake me awake with fear and anger. Unlike many other Ohio communities, Shaker has a large Jewish population, creating a sense of safety and belonging that those other places lack.

With a Catholic mom and Jewish dad, my family being interfaith leads to my complicated religious identity. The last time I went to synagogue in-person was before the pandemic before the age of online services over Zoom. Upon walking into the synagogue, I caught sight of a police officer standing by the entrance and one police car parked in the parking lot.

These precautions seem normal now, a part of everyday life.

On Oct. 27, 2018, during morning Shabbat services at the Tree of Life Congregation, a Pittsburgh synagogue, an armed suspect killed 11 people and wounded six. I remember watching the news with my family, anxious, devastated, but most of all, livid. Eleven people were killed, murdered, in their place of worship.

There have most certainly been instances of anti-Semitism in Shaker. I have overheard anti-Semitic “jokes”making fun of how Orthodox Jews dress. I have overheard so called “jokes” about the Holocaust at school, directed at Jews. One student in my freshman year math class made an extremely jarring “dark joke” about the gas chambers used by Nazis during the Holocaust. He eventually noticed my disapproving glare and jokingly apologized after I explained why that so-called “joke” is not funny.

Although there have been instances of anti-Semitism, as Jews we are, for the most part, shielded from anti-Semitism.  You can find a strong, sizable Jewish community within the “Shaker Bubble”. For the most part, I have felt safe as a Jewish person in the Shaker Bubble discussing issues pertaining to my community. This is not to say that Shaker is immune to anti-Semitism, just as Shaker is not immune to racism, sexism, homophobia, xenophobia or hate in general.

I often discuss with my cousins, who live just a half an hour away, the stark differences in the cultures of our schools. They are two of the few Jewish students at their school. They, like many school districts in Ohio, don’t have days off for Jewish holidays, which I often take for granted in Shaker.

On Jan. 15, during Shabbat service at Congregation Beth Israel, a synagogue in Colleyville, Texas, a man held four people hostage, including the congregation’s rabbi. The rabbi was known for inviting people of all walks of life into the synagogue.

After reportedly having a peaceful conversation with Malik Faisal Akram, Rabbi Charlie Cytron-Walker invited him to the synagogue. As Cytron-Walker began the service, Akram pulled out his gun and started yelling. Alarming congregation members watching online, many called the police. After a 12 hour standoff, the four hostages escaped as FBI agents rushed in.

In Shaker, I’ve been able to have open and vulnerable conversations  about being Jewish with my friends and family. For others it is most likely not like that. Cleveland has a larger population of Jews compared to other areas in Ohio. As my family and I anxiously waited for updates on the hostage situation, there was a noticeable and tense silence at the dinner table. Before learning that the four hostages safely escaped, I could not stop scrolling through news updates on my phone.

My stepmom alerted me that the situation had been diffused. The FBI had released the hostages.  I breathed a heavy sigh of relief and tried to go to bed. I thought about how the situation could have gone differently. All too often these types of situations happen and all too often they don’t end as well.

I think about how the affected families must have felt, worrying about their loved ones being in danger. No one should have to live in fear because of their religion, culture or beliefs. Jewish people should not have to fear being attacked, threatened, or harassed for their identity. Whether it’s targeting a synagogue for a violent attack or making extremely unfunny “jokes” about the way orthodox Jews dress, anti-Semitism is prevalent everywhere.

To address the prevalent issue of anti-Semitism, yes, even in Shaker- it’s vital to say something if you hear something. Next time, if you hear an anti-Semitic “joke” call the person out. Ask the person why exactly they find that “joke” funny. This will force them to examine the blatant anti-Semitism and all hate for that matter.

This way, you make it known that whatever space you’re in is not a space for anti-Semitism or hate in general. Another thing that we as a community must do is to educate each other about anti-Semitism. We must have difficult discussions about anti- Semitism in classrooms, with our friends and at home. In history classes we need to be discussing the history of hate against Jews, which is a necessary step towards keeping anti-Semitism out of Shaker, as well as on a broader scale, outside of the Shaker bubble.

Make sure that your Jewish friends feel safe and welcome. Be an upstander to let Jewish people know that hate will not be tolerated in this community.