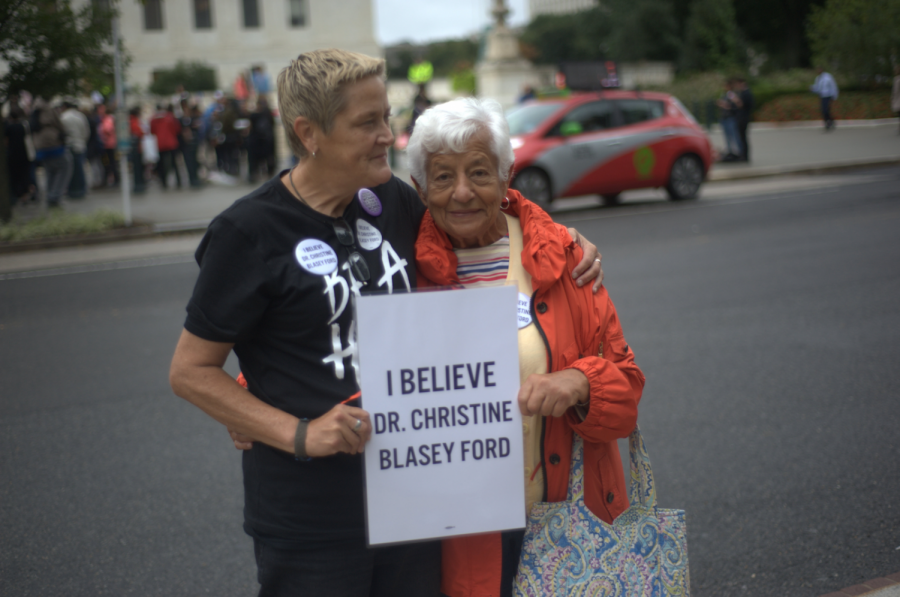 There are certain moments that remind me how human we all are, that there is something we all share, like when you’re at school and thunder booms and everyone jumps in their seat, or when a car comes a little too close to the cross walk and everyone screams and rushes back onto the sidewalk.

This is one of those moments.

I believe each word she spoke to the nation and the tears she held back when recounting her tragedy. I believe her pain when she was called a liar and when Senator Lindsey Graham apologized to Kavanaugh for all the trouble he had been through.

The nation believes her, too. At least, those with any compassion or intelligence.

I see it all over social media, on Instagram and VSCO, and I hear about it when I ask my friends why they all look so dejected. Women are tired of being dismissed. We are fighting to keep our strength and optimism, and it’s exhausting. Kavanaugh is our thunder, our wreckless driver.

Ford is a psychology professor who accused President Donald Trump’s Supreme Court nominee  Brett Kavanaugh of sexually assaulting her thirty-six years ago, when they were in high school. She testified before the Senate Committee on the Judiciary last week. Despite protesters barging in throughout the hearing and heartfelt pleas from Democrats to honor Ford’s truth, Kavanaugh was voted on the Supreme Court.

Kavanaugh’s placement caused upset throughout the nation, but stronger than hate for Kavanaugh was empathy for Ford. Ford was kicked around by the Republicans while Kavanaugh was apologized to. On Fox News with Sean Hannity, Senator Lindsey Graham said, “Ms. Ford has got a problem, and destroying Judge Kavanaugh’s life won’t fix her problem.” He apologized to Kavanaugh for his family’s troubles during the hearing, for the pain Ford’s accusation had caused him.

According to Our Resilience, only 2-8% of sexual assault accusers lie. However, these survivors are discredited and blamed for the traumatic experience they went through. Let’s look at the facts — do sexual assault allegations, false or not, really ruin a man’s life?

Trump has 19 credible sexual assault allegations and a tape of him admitting to sexually assaulting women, and he sits on his throne in the oval office.

Kavanaugh has three sexual assault allegations, and even still, he rules on the highest court in the land.

Christine Blasey Ford, who did nothing but speak her truth, received death threats and was chased out of her own home.

Protesters have been a consistent presence during Kavanaugh’s confirmation hearings. During Senator Kamala Harris’s questioning, a woman continued calling out, “Be a hero and vote no!” until the guards grabbed her arms and removed her. Her screams were muffled by the courtroom doors, but still persisted. Seconds later, another protester was forced out of the room after calling the hearing a sham. The intense protests throughout the senate confirmation are unprecedented.

These frequent interruptions were not the only precedent set in Kavanaugh’s hearing. Democratic Senator Richard Blumenthal asked for the hearing to be adjourned until the Democratic senators had access to all information regarding Kavanaugh, which Republicans had been withholding. Blumenthal’s request was met by applause and cheers from the audience. “This is a travesty of justice,” another protestor called out. “Cancel Brett Kavanaugh!”

We lost this battle, but we have yet to lose the war. Elections are coming up, and we need to give justice to the 19 accusers of Trump, Christine Blasey Ford and Anita Hill. If these men in power think that history will paint them with a halo, they are terribly mistaken.

I know that at times like these, it is easy to lose hope. I’d like to think that deep within everyone, even Sen. Joe Manchin, Graham, or even Kavanaugh, there is some form of a moral compass. But until they prove me right, I am going to continue to fight alongside those who advocate for human rights, I am going to fight to keep alive the humanity within all of us.

Ford proved that Kavanaugh and Trump cannot bring us down. Her bravery was a beacon of hope for action and change in the future. As long as we have people like Christine Blasey Ford fighting against people like Brett Kavanaugh, the war will not be lost.