The high school's updated tardy policy, which can lead to both after school detentions and in-school suspensions, is flawed from the students' perspective. 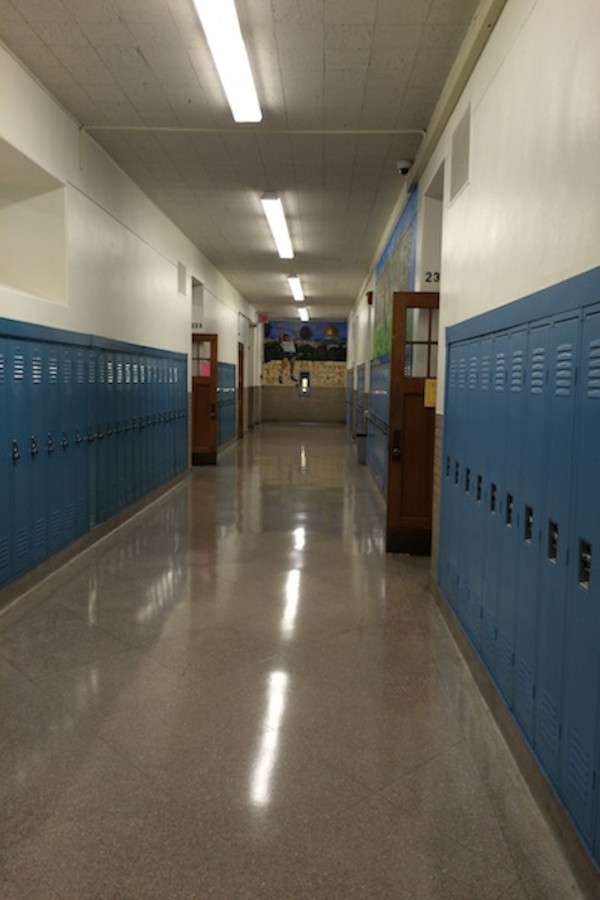 A second floor hallway of Shaker Heights High School right after the second bell on Friday, Aug. 28, 2015, the first day the new tardy policy was implemented.

What was once a trainwreck is now a ghost town. But the real question is, will there be an influx of stragglers returning soon?

With the district’s increasing emphasis on efficiency, the new tardy policy seems counterproductive.

The policy states that classroom doors will be locked after the second bell rings. If a student shows up late, they will need to go to one of two tardy slip offices, located on the first and second floor, and receive a green pass. With this green pass, students have five minutes to return to class before being marked unexcused. Students who have an excused tardy will be issued a pink pass to differentiate from those who are unexcused. After five green slips, students are required to attend an extended study detention after school, and after 10, students will receive an in-school suspension.

We understand that the administration feels obligated to herd wandering students into their respective classrooms, but there are some glaring flaws in the plan.

Most concerningly, it’s bound to chase its own tail. Students only a minute or two late waste precious learning time locating the pass station, receiving their printout passes and hiking back to class. What could have been a brief absence becomes a much larger disruption; the late student has missed more instruction, and his later arrival distracts classmates who are deeper into the day’s lesson or activity.

Although Shaker students are admittedly notorious for wasting their four minutes between classes, there are reasons aside from hallway dawdling why a student might be late to class. The hallways are chaotic — especially the central hallways that adjoin the cafeteria and main office — after lunch periods. Hundreds of frantic students rushing to their classrooms slow the pedestrian flow to a halt. An average weekday is like a schoolwide boxing match as students dodge and dip to avoid a backpack or elbow to the face. A quick binder change at a locker or a stop by the bathroom may no longer be a possibility for students if they cannot guarantee they will reach their classes before the bell.

Although this new policy may solve Shaker’s staggering tardy rates — 100,000 tardies were reported in each of the last two years, and that number most certainly reflects underreporting —  it creates a different problem. Rather than latecomers clearing the halls a minute or two after the bell, they now must travel around the school in search of their green tickets, potentially causing more commotion in the hallways during class time than before.

Additionally, the system may deter students from showing up to class at all. When the consequences for tardiness appear worse than those for skipping a class, or the effort to travel to the pass station and back to class seems too great, some may not bother to show up when running late. The tardiness rate may drop, but the absences will start to pile up.

It is not uncommon for new high school policies to fall flat within the first few weeks of the school year. With a limited number of security guards and administrators patrolling the halls compared to the number of students swarming about after the bell, there is skepticism that the policy can be fully enforced, especially after the initial fear has died out.

The larger issue here is that the administration is not doing anything about why students are late and simply jumped to implementing punishment. The school should at the very least allow students a week of leeway to adjust to their new schedule and find appropriate routes. It would reduce congestion in the hallways and, we hope, tardiness.

If the rules of the road were applied to hallways and everyone walked to the right, students could avoid being bruised by flailing backpacks and panicked limbs pushing their way to class. Teachers could show their students alternative routes to classes, including the less populous, unmarked stairwells.

Rather than punishing tardiness, the school must study the root of the problem if they want to see any real change.