When Silence is Louder than Speech 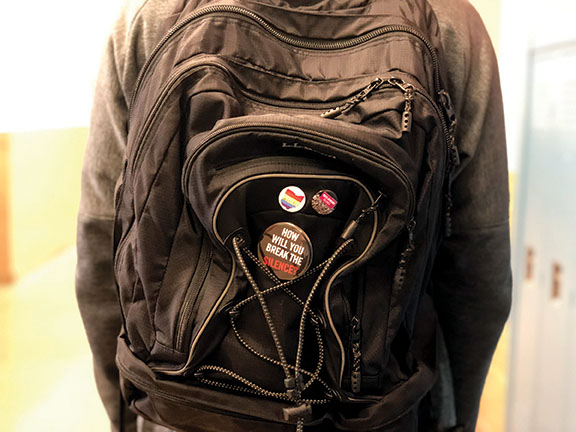 A vow of silence involves someone commiting to abstain from talking or, in some cases, communicating with others at all, for a set amount of time. More than 10,000 people participated in the national Day of Silence in April.

When freshman Emerie Anderson was in seventh grade, she joined other middle school students in remaining silent one April day in 2017.

Anderson’s vow to remain silent was inspired by her wish for “men to understand that women are not objects.”

“To take my vow of silence, it really meant a lot to me, because I felt like I was changing the world just a little bit,” Anderson said. “And it really made impacts on others because they realized Emerie silent is not a good Emerie, because I like to say things.”

Anderson and classmates took a vow of silence to draw attention to sexual violence and sexual abuse of women; it occurred in April of their 7th grade year and was led by a group of teachers.

Other students are wary about taking a vow of silence. Freshman Emma Murray said she hasn’t taken a vow of silence and won’t. “I value my words; people need to hear what I have to say,” she said.

Someone who takes a vow of silence promises not to speak (and in some cases not to communicate at all) for a designated amount of time. Such efforts have been used by religions for years.

Catholic organizations offer retreats that are completely silent with the goal of becoming closer to god. Vows of silence are also commonly practiced in Judaism and Hinduism. Monks and nuns practice limited speech — they only talk in necessary situations.

In the past few decades, people taking vows for political reasons are increasing. The first large political vow of silence was done by a group of students at the University of Virginia in 1996 for gay rights. It became sponsored by the Gay Lesbian Straight Education Network, an organization that supports LGBTQ+ rights, in 2001. GLSEN refers to this event as a “Day of Silence” and it takes place every year in April. Their biggest event to date was in 2016 with more than 10,000 people registered as participating.

The third most popular reason for a vow of silence is for personal reasons such as stress or the feeling of complaining too much.

According to psychcentral.com, being silent for a minimum of two hours can allow new brain cells to reform in the hippocampus because they have time to completely rest. Staying silent also allows tension to leave the body.

Junior Cecilia Zagara said she would consider taking a vow. “Maybe, if I believe in something so much so,” she said.

Social Studies teacher Kyle Fleming said he has had a few students take a vow of silence and they usually give him a letter about their plans before hand. All of his students thus far have done it for political reasons, such as Day of Silence in April.

Social Studies teacher Paul Kelly said he has never taken a vow of silence. The closest he has gotten is “a 30-hour fast I didn’t finish.” All of his students who have vowed silence have done it for the Day of Silence, which occurred this year on April 12.

Anderson said she understands not everyone can take a vow because it’s hard to be silent for a day. She alerted all of her teachers before participating, but “they still called on [me]; it was really hard,” Anderson said.

“I was like, ‘Why do these men keep on calling on me when they know I should be silent?’ ” she said. She only remembers breaking the vow once because she had to use the restroom.

Anderson said vowing silence was very empowering. She said, “Knowing that I could be part of hundreds of women in doing this together, it really just made me feel good.”