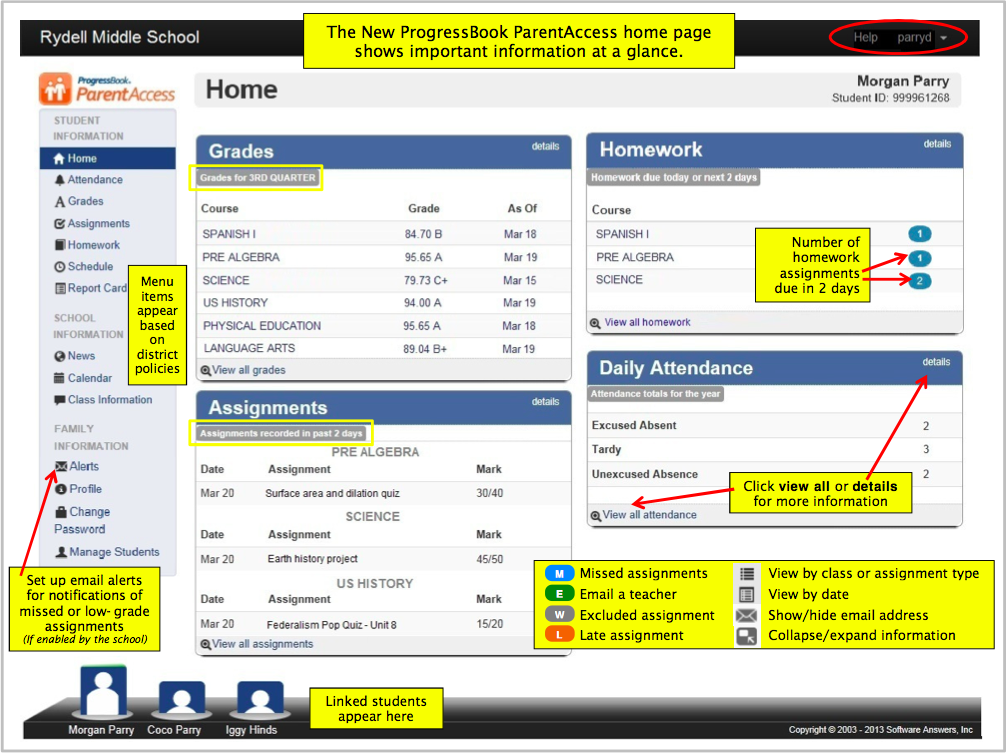 The updated version of ProgressBook, the online grading system used by the Shaker Heights City School District, will not be available for students and parents until the district sends out new key codes.

ProgressBook, used by more than 750 school districts across the country, is operated by Software Answers, an educational technology company based in Brecksville, Ohio.

In an update posted to shaker.org, the district said the key codes and instructions for setting up separate student and parent accounts will be mailed the week of Sept. 2. Old usernames and passwords no longer work.

Technology Director Kathy Fredrick said that teachers already have access to the system, which was “the primary focus” of the district. In an interview Friday, she said her goal was to have the key codes for students and parents “in the mail by the end of next week.”

According to a sample homepage of a parent’s account provided to The Shakerite by Fredrick, parents will now be able to monitor multiple children’s grades with one account.

Class grades, recently turned in assignments, upcoming homework assignments, and attendance will all be displayed on the homepage. As with the older version of the system, parents and students will be able to receive email alerts for missing or low-grade assignments.

Communications Director Peggy Caldwell said in an email interview that ProgressBook released its new product to the district in early August, and that the district has been testing it since then.

“Because the procedure for establishing student and parent accounts has changed completely, we needed time to test it before rolling it out. We did not want to put it out there without a full understanding how the new system works and what the user experience would look like,” Caldwell said.

“Each parent and student has to be issued a key code, which will enable them to set up an account. Those key codes needed to be generated by our data services department and are being merged to create a customized mailing for every family. As you can imagine, the mailing is massive and complicated,” Caldwell said. “It is worth a few extra days to get it right.”

Caldwell added that the district did not want the key codes to “get lost in all the other paperwork at the start of the year.” She said the modernized online gradebook will be more user-friendly and intuitive.

As an example of the improved efficiency of the system, Fredrick pointed to forgotten usernames and passwords.

“They’ve revised the way accounts are created, Fredrick said. “The end goal is that you’ll sort of have a self-service login the way most online vendors and online services have; that if you forget a password or forget a username, you’ll have a way to click and get that reported back to you via the system, rather than having to wait for someone [at the school] to change it for you.”

Some students, who rely on the online system to keep track of their course work, don’t appreciate the wait.

“I’ve already turned in assignments and had at least two quizzes that I’d like to be able to see on ProgressBook,” junior Sarah Marek said.

“I don’t see a reason for it [the delay],” she said. “Because personally, I didn’t see anything wrong with the old ProgressBook.”