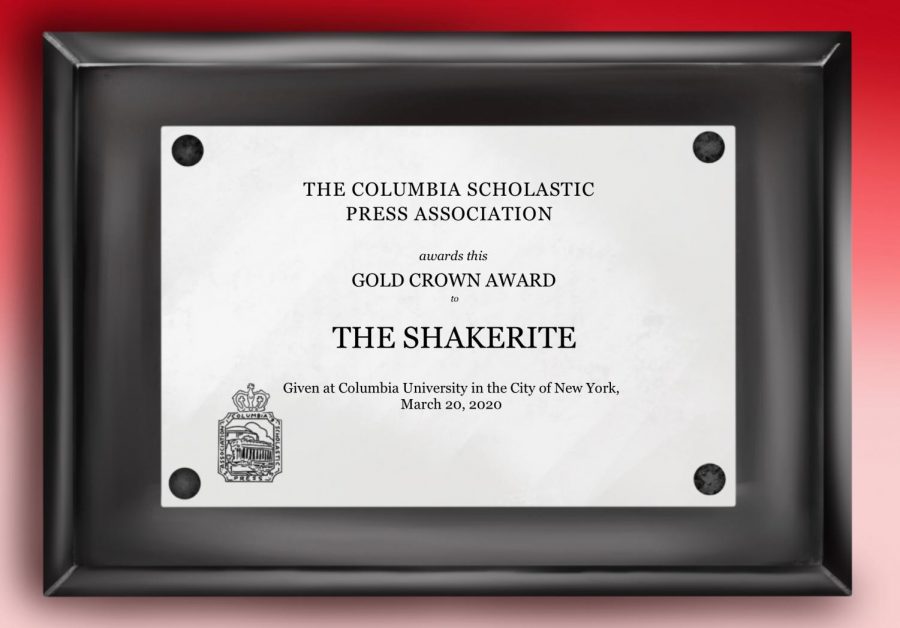 The Shakerite has been named a Gold Crown recipient by the Columbia Scholastic Press Association for its online and print news coverage during the 2018-2019 school year.

Each year, Crown Awards, considered one of the highest honors in scholastic journalism, are given to student publications that enter the annual competition. The Shakerite was awarded a Gold Crown for Hybrid News coverage today via an online CSPA announcement. The awards are presented at the CSPA’s annual Scholastic Convention at Columbia University in New York. However, the convention was canceled March 6 for only the second time in its 96-year history in keeping with guidance about stemming the spread of COVID-19.

By entering the publication in the hybrid category, The Shakerite was evaluated on its year-round coverage through shakerite.com and its quarterly news magazine, The Shakerite.

“Crown Awards are judged at Columbia by panels of invited judges, working in groups to review all entries,” according to the CSPA. This year 1,145 publications were eligible for an award. In the Hybrid News Category, 25 schools were awarded gold crowns and 35 were awarded silver crowns. The Shakerite was one of two schools from Ohio to be awarded a crown in any category this year.

Under their leadership, The Shakerite covered controversial actions by two athletic coaches;  the heated Nov. 8 community meeting; the successful SHTA due process grievance on behalf of English teacher Jody Podl; the hiring and fate of former Principal Jonathan Kuehnle; development of the Van Aken District; and the Fernway Elementary School fire.