The PSAT will be administered on Oct. 10 for sophomores and juniors only 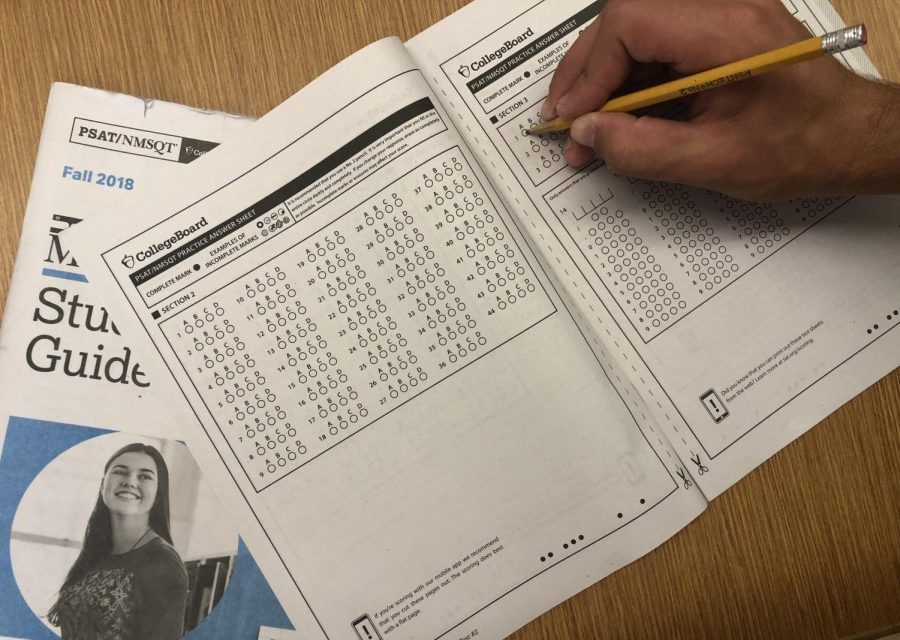 Student takes a practice exam in his PSAT practice booklet. Ohio law requires that schools administer ACT or SAT to all grade 11 students and pays for the administration but does not require or support the PSAT.

The PSATs are a practice test for the SATs and a qualifying test for the National Merit Scholarship. Students who score in the top 1 percent of PSAT results compete nationally for nearly $6.5 million in scholarships offered by participating universities, corporations and the National Merit organization. The tests are created by the College Board, a not for profit American organization that develops and administers the SAT and PSAT.

Principal Jonathan Kuehnle said that for the first time the district has decided to give the whole day off to students not taking the examination due to the College Board’s unyielding scheduling requirements. The College Board dictates that all students must stay in the testing area for a minimum of four hours. In addition, because of the number of special needs students accommodated by law at Shaker, this four-hour requirement can double. “Somebody who needs extended time gets exactly 100 percent more time to take [the PSAT], so they would get two test periods,” said Kuehnle. “So, if you are taking a four-hour long test, and you get extended time, you are here for eight hours.”

Students will also be given a lunch break, and the testing schedule has intermittent bathroom breaks built in.

Freshman Jack Whitaker said that he takes his education very seriously and that he agrees with having the day off because students taking the test deserve a one-hundred percent silent, focused testing environment. He said he would expect the same if he were taking the test himself.
Ohio law requires that schools administer ACT or SAT to all grade 11 students and pays for the administration but does not require or support the PSAT. The district has chosen to administer it.

All grades will be given the opportunity to retake the EOC exams in December.

“The state of Ohio loves to test us,” Kuehnle said. “You know the old law No Child Left Behind? I believe they’ve replaced it with No Child Left Untested.”