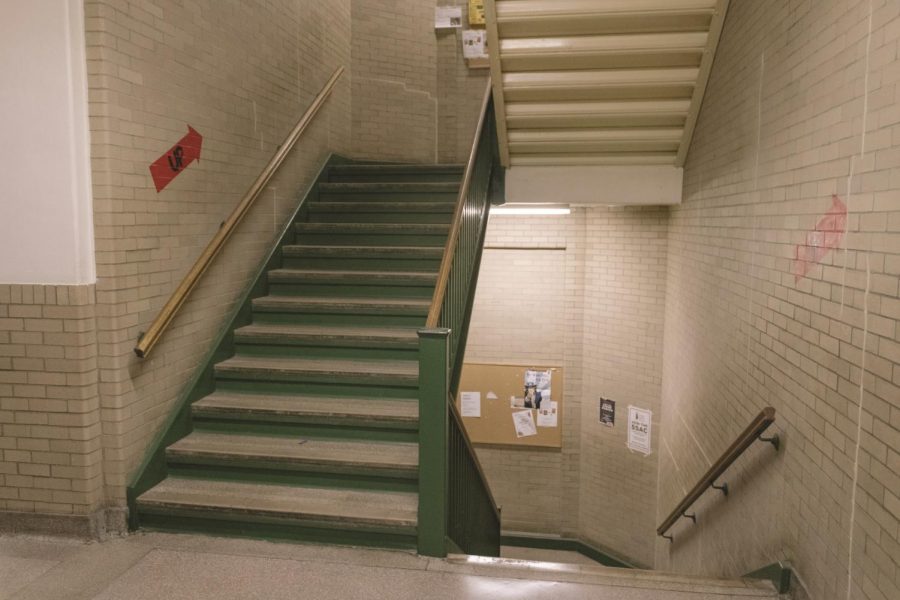 Nearly 60 people were observed going the wrong way on the directional staircases on the second floor between fifth and sixth period Sept. 12.

Between periods, people are expected to follow the directions assigned to each staircase — and most do. Due to gridlock and crowding, the administration assigned directions to the two main stairways in 2002.

There is no mention of directional staircases in the student handbook. The designation is more of a practice than an official rule or policy. The stairs are sometimes monitored during transition periods, but there seems to be no real consequence for going the wrong way.

The Shakerite reported 59 students disregarding directions between fifth and sixth periods in a Dec. 21, 2018 story that addressed whether the new tardy policy was affecting students’ decisions. Students interviewed this year said they go the wrong way for convenience more than anything. They also don’t want to walk all the way to the other staircase and risk being late.

English teacher and Shaker Writing Center co-director Aimee Grey said that students should plan their routes through the school when they get their schedules to avoid confusion. Directional staircases are in place for a good reason, she said.

“Students who ignore that are being selfish and are disregarding their peers,” Grey said.

Principal Eric Juli said he does not see a problem with students going the wrong direction. “It is important to have time to take a break, get a drink of water, or get to a locker.”
Juli continued, “I don’t see what [the directional staircases] gets us in the long run.”

“I think that they were made with the intention of doing good,” said Juli, “but have caused unintentional consequences.”