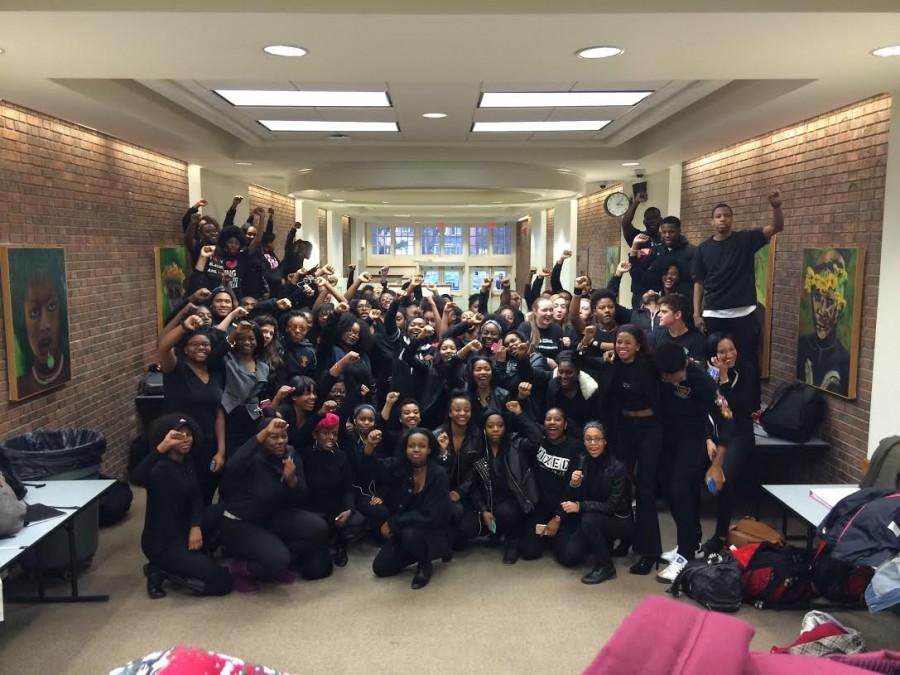 Black History Month spirit week participants, dressed to the black-out theme, gather in the Egress for a picture Feb. 24.

So much to celebrate, so little time.

Students dressed according to a new theme each day for the Black History Month spirit week Feb. 22-26.

Seniors Mekkah Husamadeen, Antonio Gonzalez and Morgan Owens came up with the idea for an African-American based spirit week.

“There’s always spirit weeks for other things, you know, but there’s never been a spirit week for Black History Month, and we were like, ‘That’s a great idea’,” Husamadeen said. “So on Sunday, I was like, ‘Oh shoot, it’s like the last week of February, we should do something.’ So basically me and him, and this other girl Morgan, we kind of put our heads together and we thought about what we could do.”

Monday’s theme was ’90s hip-hop, Tuesday’s was Afrocentric, Wednesday’s was back-out, Thursday’s was black excellence, in which students dressed formally, and today is hoodie day in honor of the four-year anniversary of Trayvon Martin’s death.

“This spirit week can really relate to, you know, black people,” Husamadeen said. “It’s Black History Month and so, on Twitter when I posted it, a lot of black people were like, ‘Oh my gosh, this is the coolest spirit week ever’ because they felt like they mattered. They felt cool and so, that’s what we kind of wanted to do.”

“The importance of Black History [Month] is that it’s the only time my people’s history, and us in general, are truly acknowledged,” Owens wrote.

“As far as participation goes, I think we get more and more support each day,” Gonzalez wrote. “But in terms of appreciation, I feel some are grasping the importance and the message while a lot of people are just doing it because they want to follow the trend; but they have to realize, this isn’t a trend. This is our life and this is how we should go about it every day of every month, not just a single week in one month.”

Though most of the participants were African-American, students of different races took part in the spirit week. “It feels like everybody’s coming together as one,” junior Paris Penn said. “It gives us more insight on unity.”

“I think the reason why I did this is for inclusivity,” Husamadeen said. “I often feel like I am, I have to be the voice for black people. So when I’m at Student Council meetings, I try to give ideas so we can have more participation from our black population.”

Said Gonzalez, “Black History Month is taking the time to acknowledge our past, embody the present and realize that we are the future.”