Administration has declared support of the March 14 walkout to honor Parkland shooting victims, but some students plan sit-in to protest what they see as a racial double standard 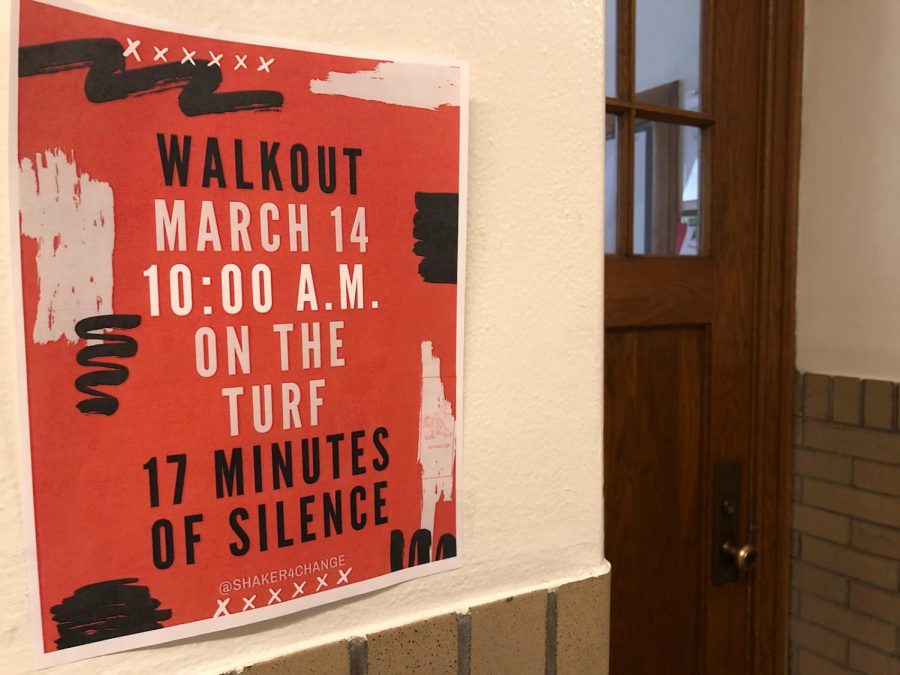 Posters hang throughout the high school advertising a student-led, student-organized walkout that will take place tomorrow at 10 a.m. Participating students will walk to the high school’s turf field at Russell H. Rupp Stadium and observe 17 minutes of silence in memory of the 17 victims of the Feb. 14 Marjory Stoneman Douglas High School shooting.

Students have criticized administrators’ support of tomorrow’s walkout, citing their prohibitive response to a 2016 attempt to walk out as evidence of racial bias and selective treatment, and some may stage a sit-in in the Eli Gallery and main office hallway during the 17-minute event in protest.

A student-led, student-organized walkout will take place tomorrow at 10 a.m., when participating students will walk to the high school’s turf field at Russell H. Rupp Stadium and observe 17 minutes of silence in memory of the 17 victims of the Feb. 14 Marjory Stoneman Douglas High School shooting. Students at high schools across the nation will participate in the walkout as part of a movement coined “Never Again” and determined to promote gun policy reform.

Calls for reform have mounted since the shooting, in which a former MSDH student returned to the high school in Parkland, Florida armed with an AR-15 style semi-automatic rifle, which he obtained legally. Students who survived the assault have led calls for legislation that would ban such weapons.

Shaker Students 4 Change, a group of 18 students at the high school, organized the walkout. The group formed after a Feb. 22 meeting with Principal Jonathan Kuehnle, Superintendent Gregory C. Hutchings, representatives from the police and fire departments, faculty and student leaders. The meeting was called by the school officials and moderated by Hutchings.

While students do not need to obtain administrative permission to organize and participate in an expression of speech, such as a walkout, they may be disciplined for speech that disrupts school.

However, Kuehnle said students who participate tomorrow would not be punished. “I don’t plan on disciplining any student or staff member who takes part in this,” he said in an interview with The Shakerite this morning.

Kuehnle’s comment echoes a March 1 statement posted on shaker.org in which administrators, the school board president and the president of the Shaker Heights Teachers Association expressed their support of the high school’s student-led protest. “Both the District and the Shaker Heights Teachers’ Association endorse and support this action and encourage our students to be advocates. Shaker has a long, rich history of student and community activism, and we encourage students to get involved in issues about which they are passionate,” the statement read.

Tomorrow’s walkout is not the first attempt at such a protest at the high school in recent years.

In November 2016, two students were suspended after sharing, via Snapchat and Twitter, screenshots of private texts sent by a third student. The texts made disparaging and broad comments about African Americans. One student served an in-school suspension Nov. 11 for her participation. The second student’s in-school suspension was rescinded Nov. 15 following a letter from the ACLU of Ohio imploring the district to not discipline the student because doing so would infringe upon her First Amendment rights.

However, students critical of the administration’s decision to discipline peers who exposed another student’s racist expression called via social media for a blackout dress day and 12:30 p.m. walkout in protest Nov. 12, 2016.

On Nov. 11, high school administrators made a P.A. announcement that stated, “We have been made aware that some students may be planning to walk out at noon to express dissatisfaction with a student issue. However, we want you to know the student issue has been resolved with all parties. Unfortunately, the law doesn’t allow us to discuss particular student issues with the public. Teachers and staff, students, please continue to conduct school as normal.”

At the time of the intended walkout, administrators and security guards lined the doors and edges of the high school’s campus, leaving only some cafeteria exit doors available during sixth period lunch. Nevertheless, some students did fill the hallway outside the cafeteria, chanting, “F*** Donald Trump” and “We need justice.”

The 2016 walkout and tomorrow’s protest were inspired by different events — one that occurred in the high school and another that occurred in Florida — but students critical of the administration’s support for tomorrow’s protest say the race of the organizing students is a more significant difference. The 2016 event was promoted predominantly by African-American students, while tomorrow’s walkout has been coordinated by a group comprising 10 white and eight minority students.

Junior Kye Harrell has played a prominent role in the organization of a sit-in for tomorrow during the walkout. “There are going to be students that stay inside because they don’t think there should be gun laws. There are going to be people that stay inside on how administration treats protest at Shaker, such as myself,” she said. “There will also be people that stay inside who are indifferent to all of the issues. In all of those situations we have our rights to feel, however but it’s not right to strip us from the First Amendment when they feel like it.”

“They are picking and choosing which protest is a disruption and which one isn’t,” she said. “We wanted to walk out for racial injustice, but it was seen as a disturbance to the school day, and we were even threatened with suspension. Our right to have a non-violent protest was not supported, yet I find it odd how this one is.”

Harrell continued, “As I’m taking an African-American History class, I have realized that when a group of black people want to protest, it is called a disturbance.”

In regard to the walkouts, Kuehnle said, “I believe they are two separate issues with two separate contexts.”

Kuehnle, who was in his first year as principal when students attempted to walk out in 2016,  said that he is offended by the notion that the difference in administrative support is due to racial bias. “This is not a racial issue,” he said. “That is offensive that somebody would bring that up. Bullets do not discriminate on skin color, and the notion that anybody would say we support or do not support this based on race — that is offensive,” he said.

“People need to get beyond that and worry about the safety of everyone in our schools.”

“I’m green lighting this one because I strongly agree with it. Anything else is speculation, and I’m not going to speculate on it,” Kuehnle said.

Sophomore Bronwyn Warnock said, “I feel like the school shouldn’t pick or choose what they support. They should either support all of the protests or support none of them.”

“I’m not going to dwell on last year’s [walkout] because this is something — this year’s walkout — where this has unified the entire student body, the entire school, if not most of the schools across this nation,” Kuehnle said. “This is something that moving forward, we can all agree on — that school needs to be a safe place for everyone. That’s absolutely what I would encourage people to focus on moving forward.”

Junior Dari Siggars said, “I’m not going to say that this subject is not important, because it is extremely important, but I just feel like they take racism lightly. It’s just as important as a school shooting and other things like that.”

Senior Felicia Hamilton, a member of Shaker Students 4 Change, said, “I want to say personally — and this isn’t me speaking on behalf of the group — but, I think the group mostly agrees that we understand the argument, everything’s very valid. We also want to make this protest as inclusive as possible, so we’re encouraging everyone to participate.”

“I completely understand where people are coming from with their frustrations with the administration this year and how everything has happened. We had planned to walk out with or without the administration’s support, because the point of a protest isn’t to get approval,” Hamilton said.

Madi Hart, another senior and member of Shaker Students 4 Change, reiterated that the group did not seek the support of the administration. “We weren’t asking for their support. We were just confronting them as a courtesy, and in the end they said that they supported it,” she said.

In addition to the high school, other schools in the district plan on participating in tomorrow’s national walkout.

Parents of Shaker Middle School students received an email today announcing that “students and staff who wish to participate in a walkout on March 14 will meet in the auditorium at 10 a.m. for a student-led and staff-supervised commemoration of the Parkland shooting victims, followed by a walkout/march around the building. Administration and safety personnel will supervise the route and at the conclusion of the march, students will return to class.”

Junior Kalub Lockhart said many of her peers plan to walk out with their hoods up. “It is to not only recognize the kids that died [in Parkland], but also the black kids that die everyday and to show that black lives still do matter,” she said. “It’s not to disenfranchise this movement but to also include another one.”