Shaker Will Feel the Pain 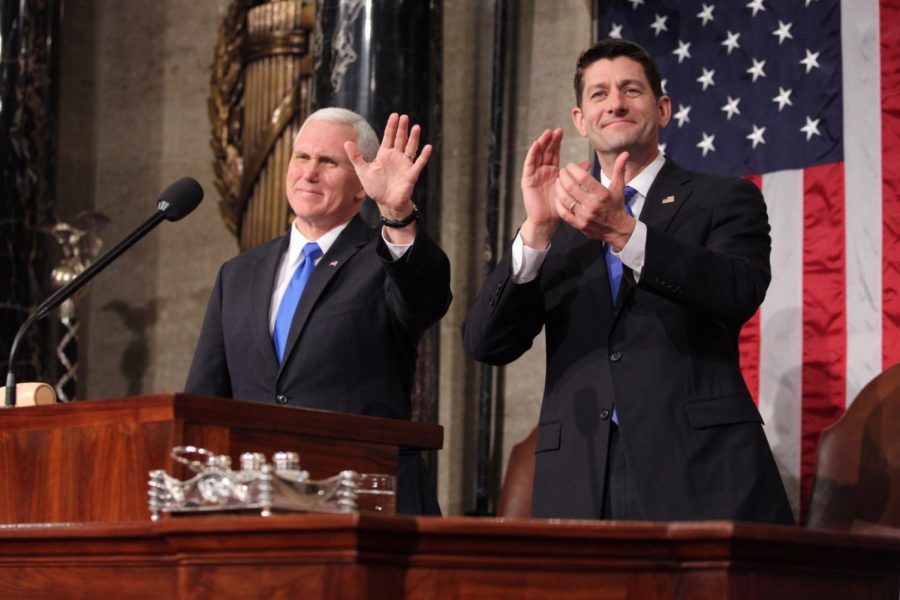 Vice President Mike Pence with Speaker of the House Paul Ryan at President Donald Trump's Feb. 28, 2017 address to a joint session of Congress. Ryan led the successful GOP tax bill effort in the House of Representatives and maintains that the plan will not increase the federal deficit.

While economists and legislators debate whether the Trump Tax plan is good for Americans, Shaker Heights Mayor Earl Leiken says that it may not be so for cities such as Shaker Heights.

“The bill is unfriendly to cities, public school districts and communities and highly insensitive to their interests and needs,” Leiken said.

Under current tax law, residents in cities such as Shaker Heights enjoy tax deductions including state and local tax deductions and property tax deductions, known as SALT. But those may soon go away, creating adverse effects. In an op-ed piece published at cleveland.com, Leiken wrote, “The elimination of SALT will make local and state taxes substantially more expensive for the large percentage of taxpayers who currently take the deduction.

“This will make it more burdensome and difficult for residents and communities to maintain local taxes that are needed to support police, fire, public works and public educational services for children,” he wrote.

Leiken also explained in an email interview that Shaker taxpayers who pay taxes under the existing Alternative Minimum Tax scale will not be directly affected by either the House or Senate version of the tax bill. The AMT affects  individuals, corporations, estates and trusts that have exemptions and certain circumstances that allow them to pay lower rates of income tax than the normal rate.

Leiken said this effect will be extreme because in the past, Shaker residents have been taxed on their income after taking these deductions, but now, they will be taxed on the a greater percentage of their income because they will only be able to deduct the first $10,000 they have paid in combined property and income taxes. In Shaker, an individual’s combined property taxes and income taxes often exceed $10,000.

Daniel Shoag, Case Western Reserve University professor of public finance, is more direct about what both bills mean: “This bill is largely a big tax cut for corporations, with some tax increases on people with high-wage income who live in high-tax, high-housing-price places,” he said.

“Economists are divided over how much different groups benefit from a corporate tax cut– shareholders, employees, management and consumers,” said Shoag.  “The bill will largely be debt financed, meaning that [the federal government] will not be raising nearly enough revenue to pay for these cuts.”

Currently, both bills have passed in their respective chambers of Congress, and now, they are in a state of reconciliation, where members debate what the final bill will look like. Backers of the Republican-crafted bill, such as House Speaker Paul Ryan, are more optimistic about the bill’s effects on the national deficit.

In budget terms, a deficit exists when an organization spends more money than it earns or collects. The federal government collects money through taxes.

In an interview with National Public Radio, Ryan said, “I don’t think this will increase the deficit. I think this will give us the kind of economic growth we need to keep jobs, to keep companies here, and faster economic growth. There’s two things you gotta do to get the deficit: You’ve got to grow the economy. You got to control spending. We have far more work to do to control spending.”

Ryan counters by saying the bill won’t increase the deficit because the economy will grow fast enough that it will pay off the increasing debt due to the increase in tax revenue coming into the government. The idea is that more people will have jobs, meaning more people will pay taxes, which will bring in more federal income to offset the deficit.

No matter what actually is passed, these changes will affect students because both bills eliminate deductions their parents use every year when they file taxes. A deduction is a reduction in the taxes paid when taxpayers meet certain requirements in the tax law.

To understand how these taxes affect a person, imagine a fictional Shaker resident named Sally Bland. She is a single Shaker citizen who makes $50,000 a year at her job as a math teacher at the middle school. She is usually taxed 25 percent of her yearly income by the current tax rate.

In addition to reducing her tax bill because she has children who live with her and depend on her for their care, on her tax return, Sally can report certain things she has paid for throughout the year that qualify as deductions, or subtractions from her total federal tax bill. She can report the state and local income taxes she paid. She can report any health expenses, such as medicine and doctors’ visits.

She can report the local property taxes that she paid as well as the amount she has paid for supplies she bought for her students and classroom. She can report her donations of clothes and household goods to charity. These deductions do not reduce Sally’s tax bill dollar for dollar, but Sally can use many of them under the current tax plan to save money on her federal tax bill.

But for Sally, life can change under Trump’s tax plan.

Sally would see no tax rate change under the House bill, while under the Senate bill her tax rate would fall to 22.5 percent from 25 percent. However, she also would notice that she can no longer deduct her state and local taxes, she can no longer deduct her children’s medicine or her own and she can no longer claim her children as her dependents. But she would, though, get a bigger child tax credit — basically saving her some money because she has children. She cannot deduct her property taxes, either, nor her classroom expenses, and when filing her taxes, Sally notices that she loses much of the money that she usually saves from her deductions.

Meanwhile, the corporate tax rate is now 35 percent, but in the bills, the rate will drop by 15 percent to 20 percent. This change is meant to encourage companies bring back jobs they shifted out of country to avoid paying the U.S. tax rate.

Not all businesses pay the corporate tax rate, however. Small-business owners and self-employed people pay rates of 10 percent and 15 percent currently, but under the bill, the rates all rise to 25 percent on a portion of their profits. This change may make it hard to stay in business and could create some fear for small-business owners in Shaker Heights.

On what citizens can do, Leiken said, “It’s a political issue. We can call legislators to tell them to vote no on the bill, we could speak out against it, we can do all the things citizens do, because it’s part of the normal political process.”