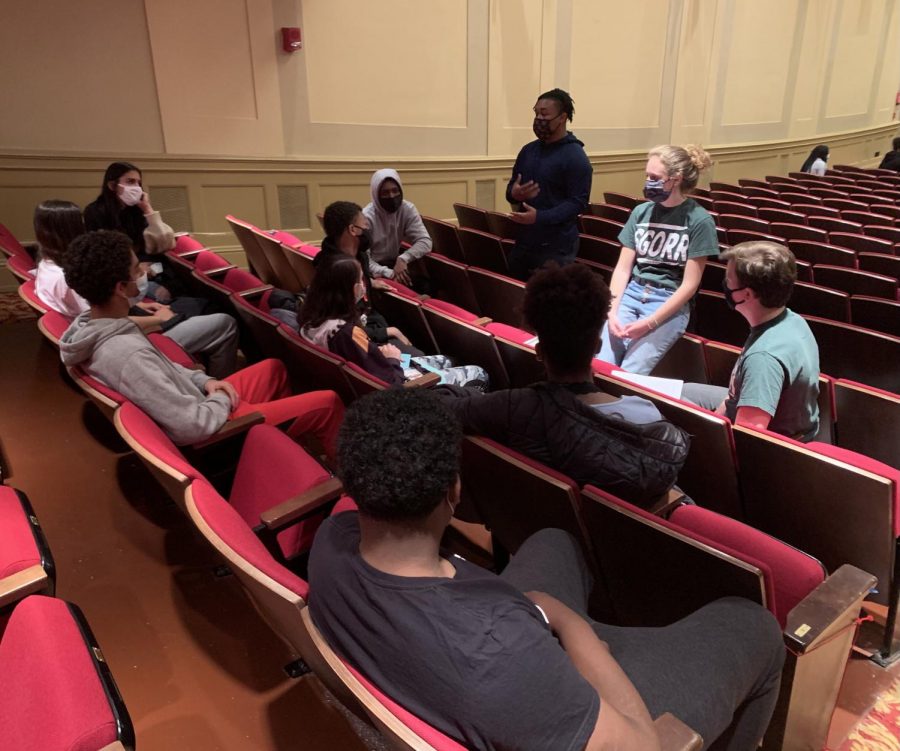 Students discuss the verdict of the Chauvin trial last night.

SGORR leaders and MAC student scholars led two 40-minute student discussions this morning during second period to review the verdict of the State of Minnesota v. Derek Chauvin trial. Chauvin, a former Minneapolis police officer, knelt on the neck of a Black man, George Floyd, for nine minutes and 29 seconds on May 25 after responding to a call from a grocery store employee that said Floyd used a forged $20 bill. Chauvin was found guilty on all three charges he faced: second-degree unintentional murder, third-degree murder and second-degree manslaughter.

The school-wide discussion was put together by the Executive Director of Diversity, Equity and Inclusion Dr. JefriAnne Wilder, in collaboration with principal Eric Juli. CORE leaders, the student leaders of the Student Group On Race Relations, and MAC Scholar members were asked to lead the discussions. MAC Scholar District Coordinator Nathaniel Reese supervised and gave direction to the students present.

In an email sent to high school students and families last night, Juli stated that it is important to provide students the space to discuss their thoughts about the verdict. “We know students will have questions and emotions to share. They are wondering what other students and their teachers are feeling,” he wrote.

“I’ve explained to our entire high school team that it’s important for all of us to create the time and space to talk with students and each other. AP tests are coming. The end of the year is coming. EOC’s are here now. And yet, giving students the opportunity to share and ask questions is definitively more important than having a regular school day,” Juli wrote in the email.

Junior MAC Scholar and CORE Leader Andrew Loney, who led a group discussion, thought the discussions were beneficial. “This was a great chance to express my emotions with everything going on. I also got the chance to hear opinions from many of my peers I haven’t met before,” he said.

This discussion follows an assembly held after the Jan. 6 Capitol Riots. Wilder also led that assembly, which included a panel discussion with seven Black students from Shaker schools.

Freshman Alexis Glinzler, who participated in the second session, also thought the discussion went well. “It was a very good opportunity to hear everyone else’s thoughts and feelings on the whole situation, especially because COVID has made it really hard to have these conversations, to know that you aren’t alone,” Glinzler said.

Reese thinks that more discussions similar to this should happen. “I can see both perspectives in terms of teachers wanting to get through the material that they have to get through, but at the same time you see instances where you have to drop everything and address what’s happening. Especially if it’s affecting students because that’s who we’re here for,” he said.

Orchestra teacher Donna Jelen, who brought her class to the discussion, appreciated the opportunity for students to talk openly. Jelen said, ”I appreciate that staff members and SGORR came together to organize this discussion. I was grateful for the opportunity to bring my students to a space where they could start off the school day by sharing their thoughts about the verdict. I thought the facilitators did a fantastic job of promoting an open dialogue.”