SGORR Aims to Improve the Conversation 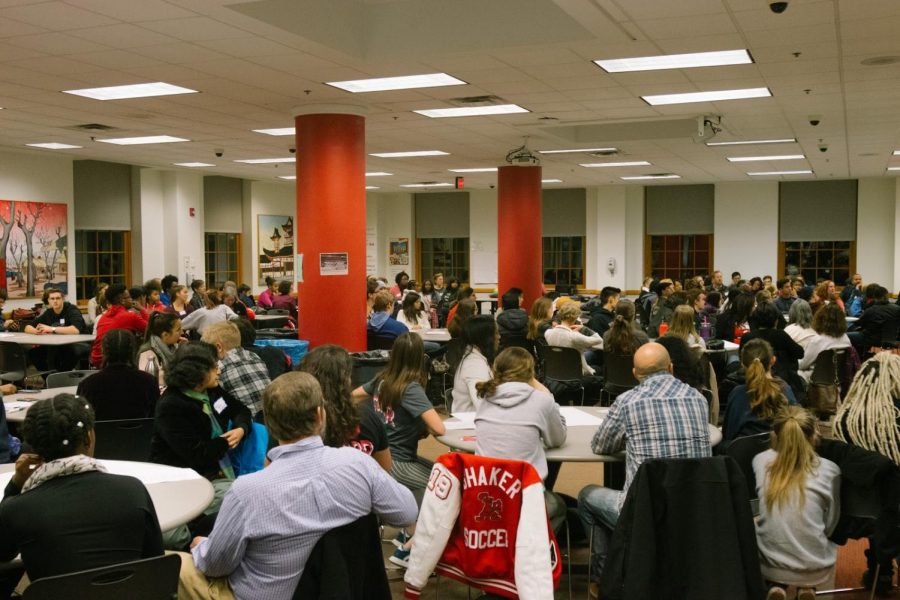 More than 150 students, staff and parents gathered for the SGORR community forum Nov. 13 in the upper cafeteria of the high school.

After the one-hour Nov. 8 community meeting marked by shouting, chants and anger, the Student Group on Race Relations created an opportunity for cooler heads to prevail.

The Rapid Response Community Forum: Moving Forward, held Nov. 13 in the high school’s upper cafeteria, served as a buffer of quiet conversation for the Shaker community between the angry community meeting and the intense Nov. 14 Board of Education meeting. The SGORR event stressed the importance of discussion rather than argument.

SGORR is a student organization that promotes positive relationships among people of all socioeconomic or ethnic backgrounds. SGORR holds community forums periodically throughout the year and meets with elementary school students to discuss the importance and balance of equity and equality.

“The goal here is to address the students that feel that they’ve been wronged by the administration—and to address problems that have been in Shaker for at least the past 50 years,” junior CORE leader Aaliyah Williams said.

CORE leaders are in charge of small groups of 10-13 people during these community meetings. More than 150 people attended the meeting. The leaders guided discussions within the groups that included sharing personal experiences of racial bias, individual perspectives on race in the community and long-term goals for Shaker schools in improving equity.

“In the past years, we had a big series called ‘Bridging the Gap,’ when we were talking about the achievement gap. This year, we’re hoping to get maybe four-ish, maybe more [community meetings]. That’s our goal,” senior Delaney Eisen said.

Based on the conflicts that arose during last week’s community meeting, SGORR organized a discussion about how Shaker, as a community, can make the learning environment equal for all students.

“What we want to do is to give him [Interim Superintendent Stephen Wilkins] the best ideas for how to move forward, while also, at the same time, letting him know exactly what the people want, so he’s not just making up his own things,” Williams said.

“I’m really hoping, though, that people can talk about their feelings without yelling at each other and that instead of insulting one another, or insulting or agitating what’s going on, we can move forward and try to learn from what happened last week,” said junior CORE leader Abe Arenberg.

“I think everybody that’s here tonight will not want a repeat of last week,” Arenberg continued. “What really made me upset was how disrespectful everyone was last week, and I can only imagine that nobody wants that to happen again tonight.”

Substitute High School Principal David Glasner, who answered questions from the stage during the community meeting last week, agreed with the students’ desire to hold a more moderate discussion. “It’s important for us to show ourselves and that we’re capable of having these conversations,” he said. “After Thursday, we really needed to come together and remind ourselves that we really are a powerful community, that Shaker really is unique. We’re capable of having really difficult and uncomfortable conversations in productive ways.”

“And so, now, we’ve got people in the school that are actually willing to do what it takes to make change. I think that this year’s gonna be a lot different,” Williams said.

Glasner said, “I think tonight really represents Shaker at its best. This was a really good opportunity to have individual conversations and build relationships, to get to know people better and learn about different people’s experiences.”