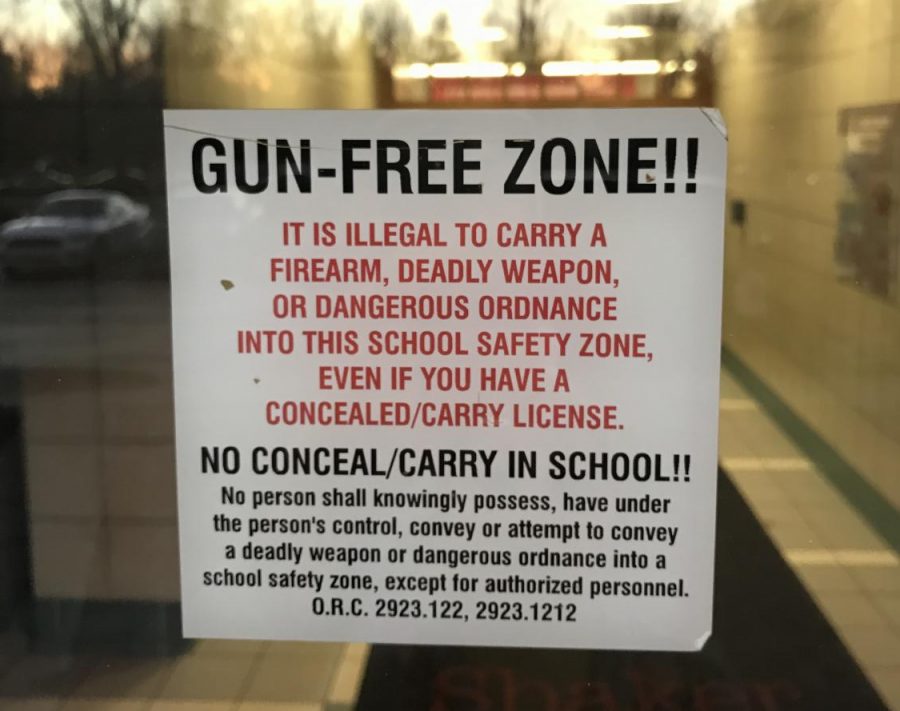 A "Gun-Free Zone" sign hangs in a window at the front entrance of the high school. “Think how often cell phones go missing or get stolen. Is it always possible to secure every piece of property in our building 24/7?” said Principal Jonathan Kuehnle.

Although some states have proposed laws that would allow teachers to bring concealed weapons into school, students and staff at Shaker oppose the idea.

Michigan recently proposed legislation that would allow citizens to bring firearms into schools, churches and other places that are off-limits for weapons. Supporters said the law would enable people to use self defense during a mass shooting.

After 26 people were shot and killed in a church in Sutherland Springs, Texas Nov. 5, the Michigan Senate pressed the vote on Senate Bill 584. The bill was originally proposed Aug. 20 by Michigan Senator Arlan Meekhof. The law passed 25 to 12 on Nov. 8. Michigan Gov. Rick Snyder, a Republican, vetoed this legislation soon after because he believed that that public institutions such as schools should have a right to remain gun-free zones. Snyder, who vetoed similar legislation in 2012, said that one reason he vetoed the bill was because it did not allow public institutions to prohibit gun usage on their premises.

It is not clear if this similar legislation could come up in Ohio and affect Shaker schools. Ohio laws currently prohibit guns in schools.

In Ohio, gun owners must take an eight to 12 hour course on how to safely use and operate a weapon, specifically a handgun, to obtain a conceal and carry permit. After the course, applicants have to accurately shoot a paper plate about 20 feet away.

A Shaker schools employee, who asked to remain anonymous, has completed this course and said it would not be sufficient. “I don’t think that would make me or any students feel more safe in the building. Unless some really specific training was offered, a conceal and carry permit is not enough to allow anyone to bring a gun or concealed weapon into school,” he said.

This employee supports the right to bear arms and enjoys hunting and target shooting but does not see any reason why bringing a gun into a school environment would make it any safer.

“Concealed carry, I think, is so much worse than open carry,” said freshman Julia Schmitt-Palumbo. “It’s kind of like a fear factor because you don’t know who has a gun.”

John Morris, president of the Shaker Heights Teachers’ Association, said such a law is inconsistent with teachers’ mission. “I got into education to help kids,” he said. “I don’t think it’s a good policy and I think trained law enforcement officers should be the only ones with access to weapons.”

Morris believes that the majority of teachers and citizens in Shaker would agree with him.

Senior Caroline Walsh said such a law would create risks. “Teachers are human, too, and what would happen if they left it in a drawer or something and a kid got access to it? I think that it’s just too much to trust them with and there are too many possible scenarios for things to go wrong.”

“Think how often cell phones go missing or get stolen. Is it always possible to secure every piece of property in our building 24/7?” he said.

Kuehnle previously worked as campus director at Springfield High School outside of Dayton. He said that while he worked there, a neighboring school was discussing the idea of putting a safe storage room somewhere in the building to protect firearms that trained teachers could have access to.

“We were very opposed to it,” said Kuehnle. “The difference in Springfield was that we usually have uniformed — I’m talking badge and gun — officers on our campus all day, every day.”

Kuehnle said that he does not object to armed, trained officers in school or in the community because they are doing their job. However, he thinks it is not necessary or safe to have teachers carry concealed weapons into schools.

He said, “I don’t think we need to equip educators with firearms in our building with our students. That’s not what the majority of us who got into education signed up for.”