SGORR hosted three experts on a panel Dec. 3 to discuss what Shaker community members and students can do to close the achievement gap 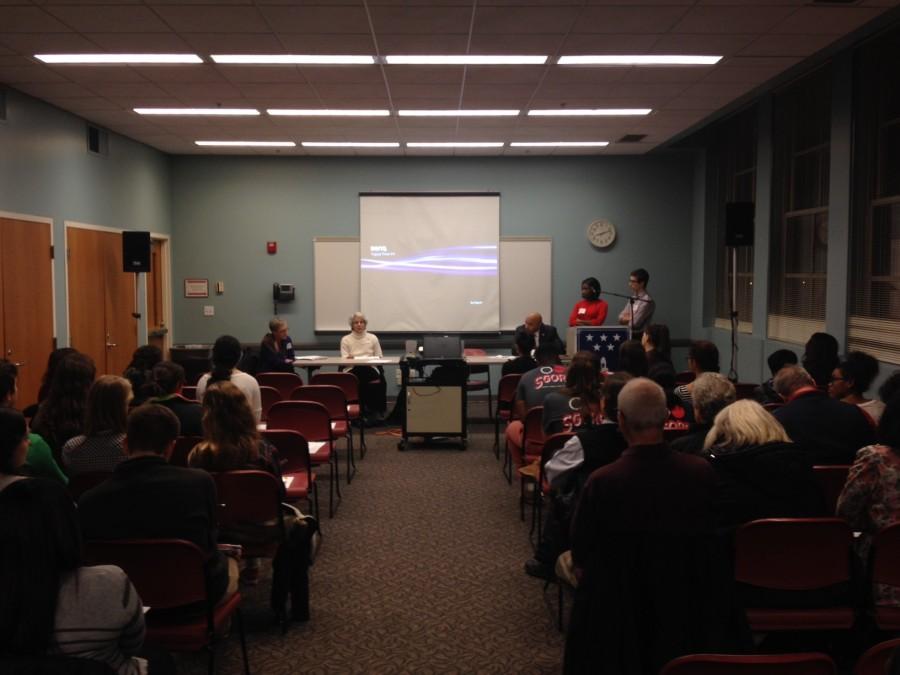 SGORR member Jonah Ricanati reads a question to the panel members on Dec. 3 at the Shaker Heights Main Library.

To “Bridge the Gap,” we need to focus on all the factors — school life, social life and home life.

“If it’s an urban area, and there’s a street or a road or a bridge or a building named after Dr. Martin Luther King Jr., the schools there have an achievement gap,” said Ivory. In order to fix the achievement gap, Ivory believes we need to notice where it is rather than what it is.

Galletta began by summarizing her paper “Under One Roof, Through Many Doors: Understanding Racial Equality in an Unequal World.” The slides went quickly, but she communicated what she learned about emerging awareness of the achievement gap in the late 20th century.

Whittington started by citing the district’s Strategic Plan, including its emphasis on equity. “We are pulling that out and using it at all times and in all instances,” she said, describing the district’s priorities, especially disparities in achievement and what her department does to affect it. Mostly, she said, they provide data.

Ivory spoke last. He noted that there is an achievement gap within the individual. A student earning a 3.0 GPA could be earning a 4.2 if provided with more guidance and exposure. His program, Students of Promise, provides that exposure through trips such as those to the OSU football stadium or CNN’s headquarters.

Ivory’s program found that the largest failure rate occurs among freshmen because the first year of high school marks the first time students need credits to advance to the next grade. The program’s focus on ninth graders raised passing percentages by approximately 50 percent in a school on the East Side of Cleveland.

After the speeches, the panelists responded to questions provided on index cards.

What is the root cause of the achievement gap?

“That’s a hard question because the reasons are so complex,” Ivory said. “If there is something that causes it, it’s not addressing the non-academic risk factors that contribute.”

Whittington added that a contributing factor is the “persistence and power of those who have advantages to hold onto them — not always consciously.”

What are other important facets?

The state/federal obsession with testing to close the achievement gap is a problem, Whittington said. “It is trying to solve a very complex and expensive problem with a cheap solution,” she said. The panelists agreed that students who move into the district have trouble becoming part of the district’s life. Most clubs, even SGORR, don’t accept students mid-way through the year except under special circumstances.

What is the largest obstacle to achieving equity? Where does the most promise lay?

“Funding is an issue,” Galletta said. The costs to completely reform the education system would be enormous.

Ivory said students are key. “The promise is in you [SGORR], the young people,” he said.

Whittington agreed. “People need the political will to say, ‘This nation needs to care for its children,’ ” she said.

Following the questions, community members organized themselves into groups — Research and Evaluation, Inclusion Initiatives, Parental Engagement and Student Support — to discuss end of year goals for SGORR and the community.

The chairs were rearranged into four circles of approximately 10 people each. After a 10-minute discussion, the group leaders presented their goals:

“Take a look at current closing gap and literature, and promote school-community partnerships.”
“Make clubs less exclusive for new students.”
“Make each class level more accessible and put the activity fair during the school day.”
“Foster equity with communication to parents by getting everybody — especially those affected by the gap — to come to events like this.”
“Destigmatize study programs and raise attendance to those who would most benefit.”

After the event, before the snack table opened, each of the panelists received a SGORR bag, complete with SGORR pin and T-shirt.